Having done four days of seminars at the Hutchwilco Boat Show, I have to admit I was not looking forward to guiding a trip when the wind would be opposing the tide with a forecast of 20-25 knots, plus a small tide.

It is only after a lifetime on the water that I now have an understanding of how the wind at certain strengths is affected by the shape of a land mass. In other words, even though the wind may be from the southwest, the true direction on the water may be more westerly. Once I know the true wind direction on the water, I look at where I can anchor the boat so the current will be basically heading in the same direction as the wind.

With area 1 spot 9 being a flat shallow area (around 7 meters deep) with a muddy sand bottom, there are a few bits of low foul. Sounding around the area will show a few fish on the sand with bigger fish close to the low foul. I didn’t bother to drop a burly bomb down so just fired out a few baits. Not using a trace, I simply have a ¼ oz sinker sitting directly on top of the hook as this rig. This sweeps across the bottom of the boat which keeps you in better contact with your bait. Being on open sand, the snapper are feeding on shellfish and crabs, meaning they are “ light on the bite” i.e. just picking up and mouthing the baits. If you use too much weight, the fish feel the resistance and tend to drop the bait.

Fortunately, with just a couple of clients onboard I was able to spend one on one time pointing out the small things that would affect their hook up rate such as keeping the rod tip low down and pointing in the same direction as the line to reduce windage.

Casting out a pattern of baits at different distances and angles from the boat minimises tangles but also allows the baits to be moved across the bottom to cover more ground. I have to admit that given the conditions, I was stunned at the number and size of the snapper we caught in the first two hours.

Despite being anchored in 7 meters with thirty meters of chain laid out, the wind increased and we started to drag so it was time to bail out and head for shelter.

Heading close to shore on the eastern side of Motutapu, the wind was so strong that rather than it going off shore, it was being affected by the land mass and funnelling down the coastline in a south east direction. With the outgoing tide, I was now able to head for a spot (area 4 spot 14) where again the boat would lay at anchor allowing us to fish directly astern of the boat.

Long story short, we lost a number of good fish but still caught around sixteen snapper that we kept, both these spots where we were forced to fish rather than where I would have ideally wanted to target.

With the conditions being so ugly despite the boat being 45 foot, I spent a fair bit of time just going over areas to get an overall idea of where the snapper were, and I am pleased to see the number of fish holding in close to the shoreline of both Rangitoto and Motutapu islands. With the weather looking like it’s going to be very fishable this weekend where will I be heading, it will all depend on the wind strength and wind tide direction. The Noises offer a good number of spots all close by that you can anchor the boat to your advantage and that’s where I am planning to go. If it does end up getting rough, the low foul close to shore on the northern side of Rangitoto would be my next best choice.

Even though there may not be a lot of fish showing on the sounder, it’s all about the way you present your bait over the winter months, use the smallest weight cast the bait well away from the boat and stay in touch with the bait to feel the small bite. It’s all about the way the fish are feeding, small bites are not just small fish, best of all catch and butterfly fresh baits as they will always catch the bigger fish. 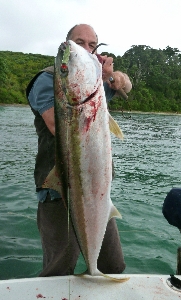