What with bloody Covid lockdowns, the America’s Cup and the weather not playing ball, I have only been able to sneak out for a very quick three hour fishing fix.

Having just three hours to get my fishing fix in meant I had to fish close to town. As I have been reporting for a while now, the spot I call the “Barges Area 1 Spot 9” in my book has been consistently fishing well (the book is available at https://www.nzfishingnews.co.nz/products/hauraki-gulf-fishing-hotspots). This is an area off the southwestern end of Rangitoto with a muddy sand bottom that’s very flat and has small low clumps of rock. As is typical of this time of the year when the snapper are feeding up on crabs and shellfish to put on condition to get them through the winter months, they are spread out and grazing in this spot. When watching your sounder, you will see small lumps of red hard on the bottom. Keep a close eye on the depth reading and you will notice it change when you pass over them. Fish closely bunched together show up as a solid mass on the sounder rather than a bunch of individual marks. By sounding in a zig zag pattern down current, you get a better idea of the spread of fish in the area.

With a few patches of red clumps, I really didn’t have time to spend exploring a wide area so made the call to drop the anchor and strayline back down current. As the tide was just on the turn, I fired out an unweighted bait as far as I could slightly forward of amidships. This allowed the bait to slowly sink, being carried by the current across the bottom and covering a wide area till it was astern of the boat. With two very lightly weighted (1/8th oz) baits cast at staggered distances astern, I had a pattern of baits set. I could then see where the strike zone was. Once the fish start biting, it is important to maintain the pattern spread as the bite will change as the berley and current increase. At the peak of the tide, I usually cast as far as possible then slowly let line out till the bait reaches the bottom as by now the ground bait is well spread astern of the boat.

The bite was not aggressive. In this area, they are just picking up crabs and shellfish and munching them, so they do the same to your bait. This is why I always put down a sabiki flasher rig to catch jack macs as they hang on the hook longer so the bite is more aggressive. A key element to fishing on the sand is to get the fish to bite more aggressively, so rather than tossing over the frames of mullet or kahawai, break them up into small bits and split the heads. Being scavengers, snapper rip into them, shaking them around as they break them into pieces they can swallow. All this commotion helps to draw more and often bigger fish into the berley trail.

Something I seldom do is keep more than a few fish but as I needed to feed the extended family, the cave slave and I caught eleven snapper and were back on the marina inside three hours.

From what I saw in the way of bird-life and schools of anchovies in the Rangitoto Channel, I would bet my last bottle of the good Captain Morgan that from the old dumping ground to the northeast of Rangitoto light up to Administration Bay, there will be a heap of snapper kingfish and a few john dory lurking around for the next two to three weeks till the water starts to cool down. Once the cup is safely back in the cupboard and I have the time to get out, I will let you know what’s happening further afield.

Our latest May cover is graced by Sam Wilkinson, who caught this stunner 79cm snap in just a few metres of water...... more >

Staying warm in the water is key to an enjoyable spearfishing session...... more >

Following on from the success of its predecessor comes the new 2021 Twin Power XD...... more >

This coming Queen’s Birthday weekend, Lance Gower and three of his friends or family will enjoy the delights of a winter break in the ... more > 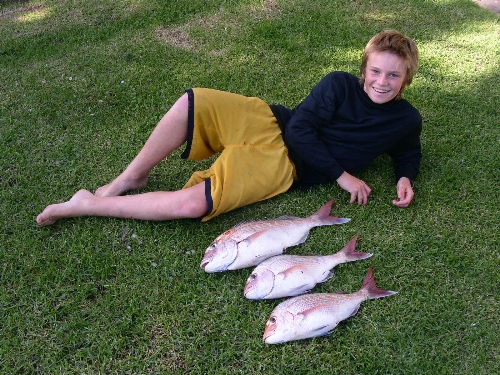