Winter fishing can be challenging but yet it’s often the most rewarding. On a recent trip, the weather forecast was variable going southwest 15 knots at the turn of the tide just after midday, and I needed to make a call about where to go. Given that my client’s fishing knowledge and skills rated from “never been fishing before” to “once a year”, I needed to cover my bases.

My first stop was the reef structure to the south of Islington Bay. It’s been holding a lot of snapper in the 35-50cm range. Being a large structure, it gives you a number of lumps of broken structure to target. With small tides with not a lot of current, I tend to favour the southern side where the bottom drops away as the current is always just a wee bit stronger. Murphy’s law – within twenty minutes the wind kicked in from the south and screwed it up just as we got onto the fish. With novice clients, it’s critical to have the boat positioned so they are fishing directly off the stern so I can teach them when and how to strike the fish.

Seeing the wind was only going to increase I slipped around to the eastern side of Motutapu to a bay called Waikalabubu. The advantage of this spot is that it’s one of the few places that can be fished on both the incoming and outgoing tide.

A small semi-exposed reef structure at the southern end of the bay extends out to the north with areas of broken foul, and the shape of the cliffs forces the wind down and out of the bay, holding the stern of the boat directly towards the target zone. Be warned, however, that the holding is not that flash in fresh winds, so double the amount of anchor warp and take a transit mark for quick reference if you think the boat has dragged.

The key to this spot as it is so shallow is not to use any weight at all, and to cast a pattern of baits at slightly different angles and distances from the foul. Berley and ground bait is taken by the incoming tide across the reef, which over time draws the fish out of the kelp and onto the sand. To be fair, with the boat swinging around in the wind it is hard for novices to understand the finer points of keeping the rod tip down and taking in slack line to stay in touch with the bait, yet we managed to nail a number of pannies. Casting a small bait right up on top of the kelp, I slowly worked it so not to get snagged as this where I often find the kahawai holding. Fresh bait such as kahawai in shallow spots in these conditions can make all the difference to the hook up rate. One kahawai resulted in six snapper and two monumental bust offs.

Heading back in, I took the boat around the northern side of Rangitoto and was surprised to see a massive work up of several acres of petrels and gannets diving. There was a lot of snapper sign below the work up as well. As tempting as it was to drop a line, it was too sloppy to have a 45 foot boat full of novices rolling about trying to soft-bait. Closing in towards Rangitoto light again, there was good snapper sign spread out in 8-12 metres.

Given the right conditions this weekend, you don’t need to go too far to get your fishing fix – just so long as you can get the boat to lie right. 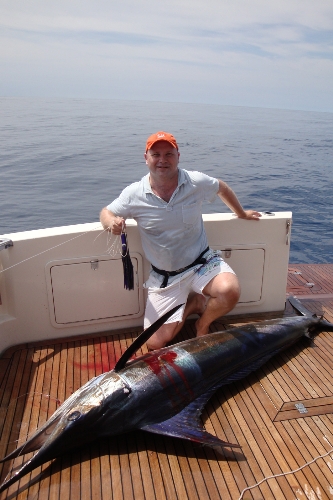