Shoreline anglers have been doing notably well this past week, in typical mid-winter style. Whether soft-baiting first thing in the morning on a jetski (sheer speed on calm water allows for offshore shorelines too), or a bit of straylining around the urban reach, everyone seems to have had their shot. It never ceases to surprise and thrill – heading home with some prime winter snapper, maybe a gurnard or two even a couple of kahawai thrown in for good measure, all from within easy eyesight of the Sky Tower and the hum of city life and traffic. Good times to be had fishing on the right day in winter.

Over the weekend, the bite seemed to come on a bit late in the day after a sharp bite in the morning. The wind didn’t drop as much as hoped but there were some good sized and well-conditioned snapper being caught later in the day, whether shoreline or out more in the open grounds of the Hauraki Gulf.

Gannets were making hay while the sun shined as pods of common dolphins rounded up schools of baitfish in under 30m out over the sandy beach areas of Mangawhai and further south dotted along the coast down towards the Hauraki Gulf. Similar scenes were apparently over in a couple of hideaway shorelines of the western side of the Coromandel peninsula without the dolphins,  anchovies being pushed right up onto dry land by the intensity of the battles, kahawai surging into zero depths chasing their next meal – many anchovies preferring to beach themselves. Ideal.

Little Barrier surrounds has also seen some good action, bright colours and bright lures getting the snappers attention and strikes, tungsten microjigs like the Pocket Rocket have been excellent.

Walking the shore casting a microjig or softbait here and there can also be a nice way to land a fish while out for an evening or morning stroll – timed with the current tidal upheavals, low tide reaching new areas so you can see territory worth fishing when that tides rushes back in and fills, with fish in tow.

The southern bluefin tuna run around the eastern Bay of Plenty has been exciting with both thrills and spills for those who have committed to braving cold weather and rough water. The bite over the past few settled days has been just what many have been looking for.

In the local Gulf leading up to the full moon on Tuesday it looks like predominantly NE winds, with sea and swell coming in also from the NE, with lots of tidal flow too. Outgoing tides could be choppy.

The Coastguard app, Nowcasting (VHF also) is great – no matter what the weather, real time wind speed is essential for judging conditions. Forecasts are predictions and nothing beats real time knowledge for making good calls. If you’re out on the east coast, try checking the wind speed at Manukau as it gives a heads up for a sou’wester due in the afternoon, as it rises there – if you see it picking up, then it’s time for ‘lines up’; beat the beating and enjoy the trip home for filleting those fresh fish with that wonderful winter condition. 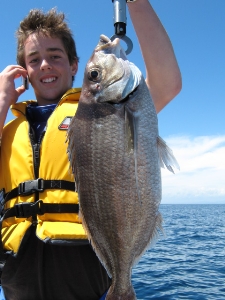 issac with a nice tarakihi. on the phone to his mum wearing her sunnies! - kapiti wide