This is the time of the year when you find that the snapper will only be in your normal spots for a short time before moving on, just as fishing the change of light is proving to produce a more aggressive bite.

Being a bit tied up with various boats over the cup races has resulted in me having to grab whatever  opportunities I could for a fishing fix, mostly they have been centred around the cup race courses.

Now in one sense this has not been a bad thing. Taking a positive out of the negative, it gave me a hell of a lot of time to just mooch around looking at the bottom. With the cup races being run over mostly flat sandy mud bottom, the snapper are either in very small schools [ and mostly small fish] or spread out like browns cows grazing in a huge paddock.

It’s as boring as bat droppings,  just slowly steaming around for hours on end, but even I was surprised at just how many snapper there are spread out feeding in what I call shallow water. Bear in mind that the footprint [ the actual size of the area of seabed showing on the sounder screen] is quite small, maybe just a meter or two wide at the most.

When spread out with no structure to hold them, two key elements to bring them closer together astern of the boat is ground bait and burley. Burley as it defrosts and disperses is mostly just a fine mist of scent that is taken astern by the current, just as top dressing when dropped from the air spreads down hills and valleys. As there is not a lot of current in these locations, what you want is over time for the current to disperse the burley over as larger area  as possible. Left close to the bottom, the burley trail will petter out and not go far whereas if the burly pot must be well above the actual sea floor the coverage is far greater. In 8-12 meters I would let the burly pot hit the bottom and the lift and cleat it off at two metres off the bottom.

Ground bait is very effective as over time it slowly sinks to the bottom well away from the boat.  Snapper will scent the burley and move up current toward the source and start snacking on the ground bait.

With the burley trail well astern, straylining is way more effective than any other rigs as you need to cast a lightly weighted bait as far back and then let it slowly sink to the bottom. Holding the tip of the rod so it is pointing down in a straight line you will see the mono straighten out when the bait is picked up. Strike hard and wind at the same time to take out any slack to set the hook.

No matter where we have stopped despite the huge number of boats around us, I toss out a bait and every time have caught a few fish, nothing flash but a feed of pannies.

Area 3:  Spot 4 (northern Rangitoto off McKenzie Bay) I have been taken to the cleaners by three kingfish here and caught snapper up to 2kg but mainly on freshly caught bait. 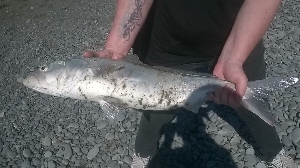 My first fish - a kahawai - Taumutu