If this is the start of winter, bring it on.

The weather has been as good as it gets and even a bad moon phase and massive tides supposedly making for hard fishing, nothing could be further than the truth. To be fair, it does help when you have a lifetime of knowledge to draw on, knowing full well the moon phase has a big impact on where the fish will be lurking and the way they will take a bait.

Trucking on down to the bottom end of Waiheke for a few days, I had the time to play around and test a few thoughts out re fishing the full moon. The good news is there are a lot of work ups in the Waiheke channel but they are only happening on the slack water, so once the tide changes and the current kicks in, they break up and disappear.

Interestingly, the work ups despite their size are just kahawai and jack mackerel being chased by kingfish, but very few snapper on the bottom underneath them. This differs from over the Xmas break where there was a heap of snapper on the bottom below the work ups. Thinking about this over a few rums, it makes sense as the work ups are just for a short time, whereas over Xmas they were going all day long. The bottom of the Waiheke Channel is a thick gooey mud with little in the way of shellfish, worms etc for the snapper to feed on, whereas the shallower water close to Pakatoa and Rotoroa, the bottom is clean sand with plenty of crabs, worms and shellfish.

Going into shallow water, there was plenty of sign, all-be-it well spread out as you would expect, I played around and targeted fish in three to seven metres just for the hell of it , casting out lightly weighted baits on a stray line rig the snapper would just mouth and chew on the baits as they would with the natural food. The hook up rate was poor till I changed over to fresh caught bait fish which hang on the hook better than the softer pilchards. Now, for no better reason than for the sake of trying something different, I began casting out homemade skutes and these proved to be deadly.

The interesting thing is I found that the snapper would only pick up the skutes when it was sitting still. By far the best results came from casting it out from the side of the boat, letting it hit the bottom then slowly working it across the current where it would kick up the sand as would a small flounder. Casting it directly astern and then working it back towards the boat proved fruitless.

Talking to several other boats that went out into deeper water in the Firth of Thames the results were very mixed - from bugger all to all the fish they needed up to 20 pounds.

Again it’s a matter of knowing and working the currents, with the big tides the best snapper fishing was to be found further out from Shag Rock on the sand in twenty plus meters where the bottom is completely flat with no tidal effect off any of the rises closer toward the island. Closer into Shag Rock at the southern end, there are a couple of rises holding good numbers of snapper but only from the slack water and for the first two hours. Straylining back onto these rises produced good fish but once the current really picks up it goes dead from then on in till the current drops off again at the end of the tide.

Once the current picks up, the fish move to the south into 16-18 metres and start to spread out. Remember the moon phase and big tides change the way the snapper feed. You need to stay focussed to get a solid hook up as they are mainly just mouthing the baits.

When you see the line straighten out and feel the weight of the fish come on the rod tip you must not only strike hard but also wind hard at the same time to get the hook set otherwise, due to them just mouthing the bait, they drop it. best way to get a more consistent solid hook up is to use a fresh butterflied jack mackerel. What I find is that with the snapper just mouthing the soft flesh get a real taste for it and tend to latch onto the head section.

Had an update from a couple of mates that targeted the northern side of Rangitoto from the light house towards the east in 8-12 meters and all reported it was not easy, but again, using fresh butterflied bait fish they managed to catch snapper up to 3 kg. 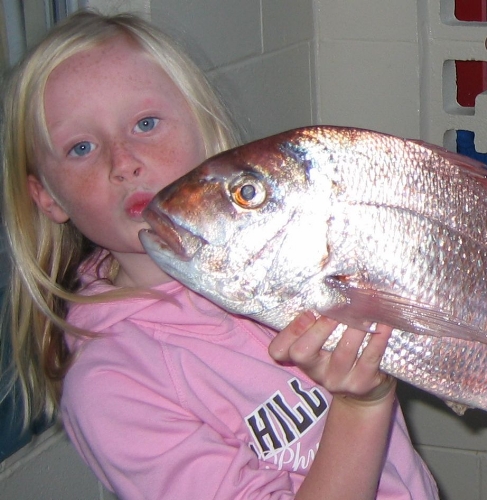