At least there have been a few brief spells of good weather between the strong equinox winds that are continually hammering the coast letting the keen fishos get out for a fishing fix.
Those folk that have headed out to deep water to chase the workups have done well. Good numbers of decent size snapper in the 2-4 kg range are lurking to the north of Tiri – if you take a line from Tiri, north to Flat Rock, then west to Motuora Island, and back up to Whangaparaoa, you'll mark up the area where most of the workups are happening.

Soft baits and jigs are catching some mighty fine fish up to and over the twenty-pound mark, plus a few nice size kingfish. Bait fishing has also been ballistic at times with some people I know catching a limit of snapper in less than two hours. The key when fishing baits is to locate the school of fish and anchor slightly ahead so that when the anchor takes hold, your baits will going back into the school rather than being directly over the top of them.

Have a few hand fulls of ground bait ready to toss over the side the moment the anchor takes hold and drop the wobbly pot of berley down until it hits the bottom and then lift it a meter or so. With the ground bait falling to the bottom well behind the boat, the snapper will then start to pick up the scent from the berley trail and make their way back towards the boat. Drop a Black Magic sabiki half-way down to the bottom to catch fresh bait as in this depth a stronger more solid bait will get a higher hookup rate.

I like to rig a ledger rig with a solid chunk of jack mackerel with a bit of pilchard on top. Depending on the strength of the current, I will use a running rig or a stray line rig If I can get away with it. If the current is not too strong, I can't resist using what I call a lazy line, that is two-metre trace with a big butterflied jack mackerel rigged on 8 0/0 hooks. Holding the bait I slowly drop the sinker down, so it hits the bottom way out behind the boat and then toss the bait over, now the bait is slowly dragged down to the bottom well back into the burly trail.

For those not wanting to go too far, there are good numbers of fish south of Tiri on the worm beds but make sure you stay well outside of the cable zone.

Rangitoto, Motuihe and Rakino channels are all holding snapper, but they are soft on the bite, so again I am finding that fresh bait is producing the bigger fish. Straylining up the side of South Island (at the southern end of Rakino) has been very productive as has the reef extending out from Snapper Bay (the southernmost bay on the eastern side of Motuihe Island). Use ground bait and berley as at times it may take up to an hour before they come on the bite.

Now is the time of the year when you can load up on snapper but bear in mind each fish you take is one that will not get to breed so limit your catch, don't catch your limit. 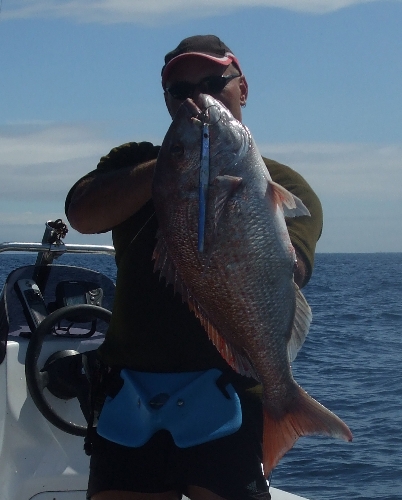