To get information on the fishing spots referenced throughout this report, purchase Bruce Duncan's book 'Hauraki Gulf Hot Spots' here

Last Friday was a cracker of a day with some good snapper caught in Area 2 on Spots 3 and 4. Just for the hell of it (and because it was so calm), I had a wee look across at Motuihe (Spots 10 and 12), and I did a drift fish using a strayline rig and managed to nail a few fish.

For those of you that got out last weekend, you no doubt saw the 'red tide' - this is a plankton bloom generated by a rapid increase in the water warming up. This can greatly affect the fishing and everyone I have spoken to found the fishing hard. Having seen these conditions in the past, I knew we would be in for a tough day. Not only does a plankton bloom affect the way the fish bite, but you will have also noticed there were no birds to be seen. Ideally, on days like this, I would have headed out into deeper water.

When guiding on Sunday, I only had a short time window which meant targeting the one spot for just three hours. Despite heaps of ground bait and berley, the fishing was very slow with fish of a very average size being landed. That being said, the novices I had onboard missed a number of good fish as they could not get their heads around the way the snapper were mouthing the baits.

I would have thought the snapper would be more aggressive on the bite now that, for the most part, they have spawned, but we experienced the opposite. When they are soft on the bite and just mouthing the baits, try a range of smaller baits to get a higher hookup rate. There is no point in everyone using the same bait so mix it up with one using a strip bait of mullet or kahawai the others using squid or pilchard.

This is a very effective way to target snapper when there is very little current and wind. Use a small ¼ to ½ oz sinker directly above the 7/0 hook, cast the bait as far from the boat as you can and then very slowly let line off till it hits the bottom – the slower, the better, as this keeps the sinker on top of the bait. Then, hold the rod so that the tip is pointing directly down your line – this will allow you to see any line movement and feel when a fish picks up the bait. When you an enquiry, let out a little bit of line so as not to spook the fish, and when the line comes up solid, strike hard. It is vital when striking to start winding as you strike the fish to take out the line stretch and set the hook. If you don't do this and drop the tip of the rod the line springs back like a rubber band and the hook drops out.

If mother nature stays on track, this weekend will be very fishable. I'll be out on Saturday, doing some research for a Sunday guiding trip, and will likely start in Area 5. If the wind and tide play ball on the outgoing,  I will target either Spot 15 or Spot 6. On the incoming tide, I'll be across in Area 6 at Spots 22 or 24.

My tip this weekend is to cover your bases; catch some live baits, put one under a balloon and set another a meter or so off the bottom. Chances are you could hook up on a kingfish, john dory or big snapper – if you're really lucky, you could catch them all!

The inaugural Fisheries NZ Seafood Sustainability Awards are to be announced in Wellington mid-March...... more >

Rare giant kokopu, one of five whitebait species in NZ, have been found in Waiheke Island wetlands.... more > 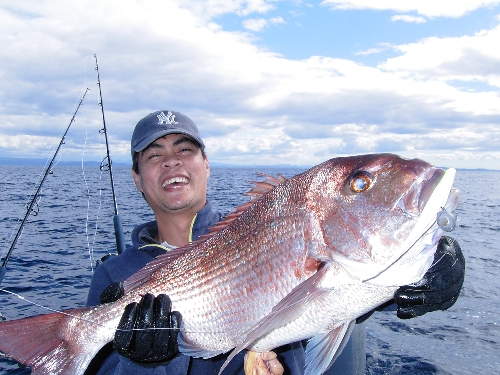 Noel with his personal best snapper caught with softbait - the Aldermans