It is now very evident that we are in a period of change by the way the trees are changing colour and the leaves now dropping off, changes are now a foot on the water also.

Having recently spent a fair bit of time in the last few weeks on the northern side of Rangitoto and Motutapu.

Usually by now the workups of anchovies, kahawai and kingfish would be spread over a wide area, but this is the first year I can ever recall where they have now virtually stopped so early. Reports I get from down south say the barracuda have turned up in numbers a month early and the game fishing has done a 180 turnaround in a week.

In saying that, the good news is there is still plenty of snapper around in bigger numbers and size than in years past, so hopefully it should be good fishing over the winter months.

If you're wanting to fish the Rangitoto, Motuihe and Crusoe Channels', there is some variation to what methods are proving successful. If you're fishing the change of light, both at dawn and dusk, your best bet will be with baits. If you're fishing during the day when the fish are moving around soft-baiting, or micro jigs will be more productive.

The Rakino Channel has been really firing, but you need to move around and chase the fish. In the 20 meter hole outside of Home Bay I found the snapper to very light on the bite when fishing at anchor, but when slowly drifting and straylining with the tide it's a whole different story. Several boats drifting beside me were on soft baits and jigs yet I didn't see any of them hook up yet virtually every bait was being taken. Where the current picks up and pushes up along the eastern shoreline of Motutapu, you will see a lot of work ups closer into the shoreline, and that is where you will now find the snapper underneath them along with the kingfish. Again you need to move with the fish rather than holding out at the one spot for hours.

Take a look at your chart, and you will see that between Station Bay and Mullet Bay there is a squiggly contour line where the depth is around 14-17 meters, this is the one time of the year I have found there to be consistently good fishing but it won't last once the water temp starts to drop. The snapper here seem to move in closer, out of the current and rest up but it is a great spot to target with soft baits and jigs as it a very clean sandy bottom free of snags. To target this area its best to spend a bit of time to get an overall idea of where the fish are, as there is no structure on the bottom to hold them. Zig-zag from around 17-18 metres and work your way into around 12 metres – mark where you see the fish, then work out the wind and tide as to the way the boat will drift down over the areas you have marked.

As I have said things are a bit different to normal but hopefully you will find for the next three or four weeks the channel between Takapu Rock and Otara Island will still be holding good numbers of snapper, strangely I have always found this area seems to fish best for the first and last two hours of the tide. At the start of the tide, the snapper are not aggressive feeders just mouthing the baits till the berley trail kicks in, so big fresh baits like slabs of kahawai or butterflied jack mackerals will get a way better hook up rate than softer baits. Don't be fooled into thinking that the small bite and taps on the line are small fish it is just the way they are feeding – feed out a little line and let them take the bait down. 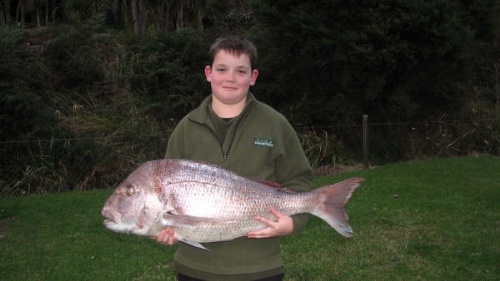