While the forecast is showing an incoming tropical cyclone would mostly be seen as a bad thing, it's a positive thing in my books.

A bit of a storm with rain stirs up the water and brings down nutrients from the land, all of which helps to fire up the fish. Snapper often go on a feeding frenzy prior to, and after a storm, but once it hits the coast the snapper tend to either head back out into deep water or seek shelter close in around the lee of headlands and islands till the storm passes. My biggest snapper (well over 30 pounds and released) was caught in the lee of Rangitoto Island a few days after cyclone Bola smashed into the North Island. A storm may not let you get out for a few days but out of a negative there is always a positive.

It could be just the respite we need after the moon phase and calm hot weather in the last two weeks had the fishing has been a bit all over the place. Lately, I've been fishing a bit on my own, trying places I have not targeted for some while. In Saint Heliers Bay reef (Area 2, Spot 2 in my Hauraki Hotspots book) for example, I got busted off and taken to the weeds by a number of fish but still nailed some good snapper up to 6kg. I also noticed a number of nice-sized trevally lurking right in close on the face of the reef.

Across on the western side of Browns Island, straylining back into the foul has also been productive, but you need patience as it takes a while for the berley trail to cover the structure and drag the snapper back towards the boat.

On my recent trips, I've found that berley and fresh bait makes a huge difference to the catch rate. Oilier berley such as salmon is best in shallow water, as it spreads further. In deep water, kina and mussel are the go, as the shell content helps it to sink and holds it closer to the boat. Fresh bait, if you can catch it, always takes out the bigger fish – take a fillet off each side slice the fillet down the middle just to the skin but not through it, fold it in two to expose both fleshy sides and just put the hook through the head end of the fillet. Don't try to strike until you see the line straighten out, or you'll risk pulling the hook from the fish before it's been taken.

The Noises (and slightly further out to the east in deeper water) have been fishing well, whereas in closer it is a bit hit and miss. Administration Bay on Sunday was a bit slow with small 30-35 cm snapper the only visitors until the late afternoon when a few work ups kicked in, after which the size of the snapper increased to 35-43 cm.

Every time I have been passing close on the northern side of Rangitoto, there has been good fish showing on the areas of low foul, but in the channel area itself, it's very different. At the start of the outgoing tide there are few fish showing yet coming back to the marina at the end of the tide (just on the slack water) there have been good numbers of snapper showing on the smaller areas of low foul just off the edge of the channel. On the western side of the channel, its mostly a flat sandy bottom and the snapper are very well spread out during the run of the tide but bunch up over the slack water. Try a drift across the sand with a strayline rig out the back and then cast soft-baits out either side to cover your bases.

The Price of Fish – at whatever the cost: Documentary highlights the failings of the Quota Management System... more >

The 9-inch Gulp! Jerk Shad is set to become the go to bait for those targeting large offshore species such as snapper and kingfish in NZ.... more >

What's the real cost of the way we are fishing in Aotearoa? Who's winning? Who's losing? And will there be enough fish for ou... more > 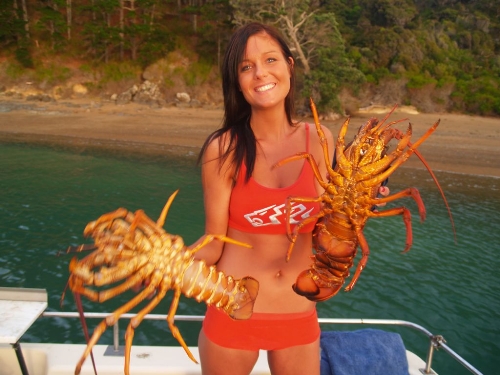 Crays that could deal to me... - Paihia, Bay of Islands