There was a song called “What a Difference a Day Makes” and that sure is the case at the moment in the gulf.

As I have always said, when the snapper are in the spawning mode, they can be all over the place. I was out doing a fishing/photo shoot around the Noises the other day and there were quite a few small work ups, but they didn’t last long enough to drag in the snapper that were grazing in the area. With light winds, the simple solution was to drift using jigs and soft-baits. It wasn’t fast fishing as the snapper were not aggressive on the take (mostly just mouthing the soft-bait), so we really had to focus on staying in touch with our baits. On the change of tide we shot into South Island at the southern end of Rakino (area 5 spot 18 in Hauraki Gulf Fishing Hotspots) and stray lined. The snapper were again soft on the bite and only got aggressive when I rigged strip baits of fresh kahawai. Because conditions were perfect, I dropped onto the foul outside of Islington Bay (area 2 spot 3) to survey the reef structure. It always amazes me how many fish this spot holds at this time of year. If you don’t find a lot of sign on the reef itself, move out to the southern edge and zig zag along the drop off as I have found that they will at times prefer to sit in a bit more current.

The following day conditions were again perfect. After telling my clients about the previous day with all the work ups, they were keen to catch a few kahawai for sashimi. Well pour me a rum and call me a liar, there was not a bird to be seen, no work ups and five eighths of bugger all in the way of snapper showing on the sounder. Now this is not a good look so a bit of thinking outside the square was required. Obviously the snapper had either just spawned or were soon going to. When this is the case, it’s best to head in close and target the snapper that are on the sand or in the kelp. Administration Bay is the place to go as it has a number of spots, depending on the wind and tide direction. The western end of the bay and around the point (area 3 spot 14) really fired – note the contour lines are quite close and on days like this, fish are most likely to be in the 15-17 metre depth range. All baits caught fish but again fresh jack macs and strip baits of kahawai caught the bigger fish.

On the way back I had a wee look at another couple of spots as this is the only way you build up knowledge and keep on top of what’s going on. The northern side of Rangitoto (area 3 spot 4) had a lot of fish showing but they were spread out. This is great for soft-baiting but if anchored and fishing baits you will need to berley to get them active.

At this time of year fishing late afternoon into the dusk can be more productive than fishing during the day, especially when the tide is peaking around 8-9pm. For a quick fishing fix, bail out after work when it’s an incoming tide and a west to southwest wind, and try straylining on the western side of Rangitoto (area 1 spots 9 and 10).

Again, remember the snapper are still spawning. Do we really need seven fish? I encourage you to take just enough for a feed and give the rest a chance to breed. 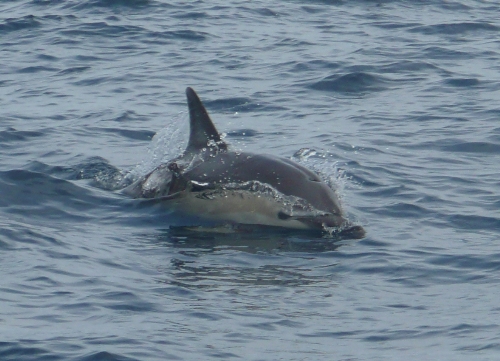