I have gone from grumpy to septic, no doubt like a lot of you will have, with the constant high winds over the Christmas break. It's been 25-35 and then up over 40 knots at times - definitely not weather you want to be fishing.

Still, when a man has to go, he has to go, although the times I've been out, I've been on a 70-foot launch, and it's still been bloody ugly! The constant high winds generate pressure waves even when the wind is going in the same direction as the tide. The few times I have been out, I am forced, from a safety point of view, to fish close into the lee of the land. Even then, the boat has swung around on the anchor like a drunken sailor.

Let's take a positive out of the negative: if you are desperate for a fishing fix, there are places that you can safely fish when the wind and tide are going in the same direction. A lot of the snapper have spawned, and are moving into the shallows to graze on shellfish. Take a look at any beach and note the shells and at low tide walk around about ankle deep to see if there are small potholes. This is a sure sign of snapper coming in with the tide and feeding. One such beach is St Heliers Bay, where I grew up as a kid. One day I set a 25 hook long line in just three meters of water close to shore for two hours and caught 23 snapper.

Fishing in such shallow water takes a bit of re-thinking – think of it a bit like a big paddock with fifty head of cattle roaming around grazing. Most of the cattle will be spread out all over the place, and the same applies to the snapper, hence why you will not see many marks on your sounder. The key now is to have a good berley trail and toss out lots of ground bait. The wobbly pot needs only to be lowered a meter below the boat as it will then be spread further afield than if it was on the bottom. Use smaller baits, such as half a pilchard or strip baits or small chunks of ground bait. These are a must as the snapper are only feeding on tiny shellfish and it is the scent of the berley and tasty small bits of ground bait that attract the fish to the boat, firing them up into feeding mode. The advantages of fishing in shallow water where there is little current on an open, clean, sandy bottom are that you do not need to use a sinker and therefore the fish don't detect any resistance when they pick up the bait.

I find using lighter line weights such as 4-6kg allows you to cast further and will get a higher hook up rate than heavier weighted line. The trick now is to cast a pattern of baits at different angles and distances from the boat, keep the rod tip down close to the water to avoid the wind putting a belly in the line, allowing you to see and feel when a fish picks up the bait.
Ideally, you want to target snapper like this on the incoming tide when the peak of the tide is just on dusk or dawn, but even on bright sunny days, there will be a few snapper lurking around. If you have never tried to fish close to shore, you will be amazed at the number and size of the fish you catch. I have caught more fish over 20lb in shallow water than in deep water.

If you take a look at my new book Hauraki Gulf Fishing Hot Spots that you can purchase here, the areas I have targeted in the last couple of weeks that have all produced fish are:
Area 2, Spots 1,13 & 14
Area 5, Spots 17 & 18
Now with the weather looking hunky-dory for the weekend, I will be looking at targeting Area 2, Spots 3 and 8 on Saturday, and then Area 3,  Spots 14 and 15 on Sunday.

Don't forget team, no fish is worth risking your life for, so play it safe out there. 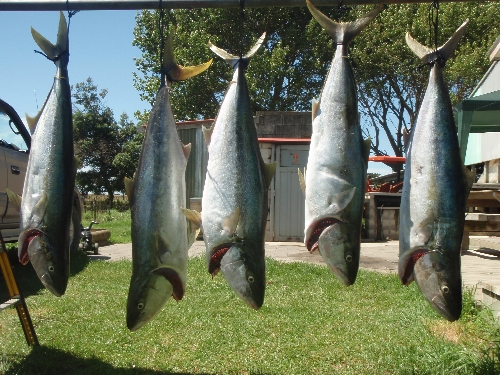