What a weather window we have had for the last couple of weeks! In fact, it's been so good I could not resist heading away on the boat for a few days, purely in the interest of my fellow man of course!

As I last reported, the northern side of Rangitoto and Motutapu has seen a lot more schools of anchovies starting to move in close, only to get rounded up and racked up by a bunch of kingfish. Well troops, the anchovies are still there but in smaller schools than I would have expected.

Having been in Administration Bay twice in the last five days, in very different conditions from zero knots to twenty-five to thirty knots, it is interesting to see what effect that has on the kingfish and anchovies schools. In the flat calm water, the kingfish slowly herd the schools into the shallower water and seem to hold them there, feeding as and when they feel. When the wind is strong, the schools head out to deeper water and break up into a lot of smaller schools which makes the kingfish do a hell of a lot of chasing to get a mouthful of food.

If you are planning to have a play in the area my advice would be to catch your fresh baits beforehand and bring them with you as there are very few jack macks around, and most of the kahawai are too big to get scoffed by the average kingfish in the bay. If it is nice and calm with little wind, look across the bay for areas of darker water (which are the anchovy meatballs) and very slowly come up towards the school on the windward side. Once abeam of them stop the boat and let it drift back down on them as often when they are getting beaten up by the kingfish the school will hold all around and close to the boat from protection. Now you can toss stick-baits, poppers, soft-baits and even dynamite in any direction knowing the kings are close by.

When its blowing and the boat is rocking around the drift rate is too much for the schools of anchovies to stick around, I find that the best way to nail a king is to watch to see where the majority of the workups are happening. Put the anchor down, and put out a couple of live baits – one under a balloon and the other halfway down to the bottom.

Either at anchor or on a slow drift toss out a very lightly weighted strayline as at the moment there is some really nice fat snapper around, that are full of anchovies. Simply cast the bait well away from the boat and slowly let it hit the bottom, keeping the rod tip down and in the same angle as the line. When you feel the weight come up on the bait or there are some small bites, let a bit of line out from them to take it down – the reason this works is because they are feeding on all the scraps from the work-ups and have guts fatter than mine, so won't chase or be competitive for food.

The bottom end of Waiheke is full of snapper at the moment. I recently had a great session out there and got taken to the weeds three times on the northern corner of Rotoroa Island, on the incoming tide. If you want a shallow water fish, there is good action in 5-7 meters of water on the flat, featureless sand between The Frenchman's Cap and the beach on Pakatoa. 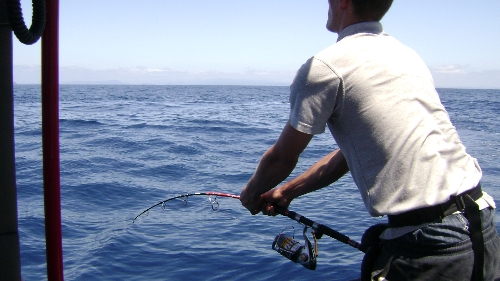