Mother Nature must have been celebrating Spring as September gets underway, the official start to the new season. Fishing was high on the agenda for many and those that did make the most of the 5kt variable weekend did well. The bite was noticeably stronger late last week/early weekend, tailing off a bit by late Monday/Tuesday. The bite was noticeably longer, then shorter and less aggressive as the days rolled past. Perhaps all their bellies were full? There are so many influences on fish behaviour but, after a fast and furious few days, the bite had to slow down for whatever reason.

Recently there has been whale activity just north of Tiri, as well as in closer to the southern side of Great Barrier. Coincidentally, this is where there has been good workup activity too. They were primarily feeding on krill/plankton style of food, meaning there was no mega burley trail left behind, so no mega fish feast nearby. When whales surface, a very short sharp spurt of activity is worth a quiet closer look sometimes, as the usual combatants lurk, and spark up in hope (like us seeing a whale spout).

Sometimes some bigger snapper and a king or two enter the immediate area at the ready, so heavier faster lures are perfect for tempting a big fish into taking a big hit. If none hit quickly, change to set of lighter gear, rigged with a tungsten microjig – with it’s faster sink rate, it’s a very tempting little snack. Kingfish and snapper can readily strike at this little shiny fluttering tidbit, famished or not.

Huge fluctuating weather patterns are forecast to continue, but the good news is that this helps bring on spring and summer style fishing which has its benefits!

Technique tip: Try this the next time you’re out fishing with any lures: soft bait, hard body, metal, topwater, inchiku or whatever… STOP.

Yes, the action you impart is often vital to attract fish into taking a bite at what they see as a weak or injured fish. With no thumbs to grasp food first, fish bite to see if what they’re attacking is edible. However, have you ever tried bobbing for apples? You know, apples in water, no hands allowed, just try and bite the apple, but it just keeps bouncing away? When attacking prey, fish use a rush of forward speed and allow water to pass through their gills, helping to get a part of prey into their mouth to bite them successfully. So while you create action in your lure by giving it the gift of life (motion) with your rod (and reel), you want the fish to actually get it, you don’t want to ‘win’ by avoiding the fish attack. So perhaps a bit like in the schoolyard at times, allow the chaser to catch up – slow right down and stop. Hold your lure completely still suspended in the water column, and wait. Particularly with light gear you will feel any touch nibble or chew at your lure – strike! You’ve finally ‘allowed’ the fish to take a bite. Assuming your hook point is needle-sharp, you’ll be playing a lot more fish. I find this even more useful when the bite calms down, and fish are less willing to chase a fast lure down using a lot of energy — fast, medium, slow, slower, Stop.
Then after several seconds at least, start a slow retrieve ready for the followers bite. If this hasn’t worked, then it’s time for a change. More on that later.

In the meantime, BBQs are primed and ready for daylight savings, extending our evening fishing leisure time later this month. Workup fishing has been fairly dramatic along Gt Barrier for several days. Landbased fishers that have been targeting kingies around the city have been having success. Likewise, those who make the trip out north of Anchorite Rock have also been finding kingfish. Squid fishing is also doing well, and kahawai schools are thriving along the end of the Whangaparaoa Peninsula. It has been relatively quiet in the mid-ground south of Anchorite, but some very good solid snapper are schooling north of the rock, halfway to the Pigeons. There’s been no top-side sign - only what you see on the sounder and a bent over rod. It’s been a little bit quiet in the Noises area, but this should change soon.

The time has come, new season, new attitude and exciting fishing times straight ahead, are you ready, the fish are. 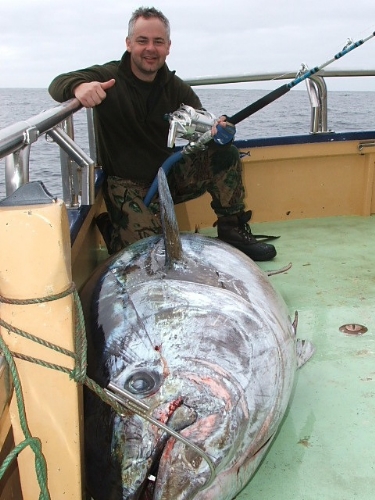