Exceptional fishing on all fronts

Throughout the past couple weeks there have been some exceptional fish caught throughout the Far North area, ranging from massive yellowfin and swordfish as well as snapper and kingfish. Houhora Game Fishing Club recently had their annual one-base billfish and sportfish tournament with over $44,000 in cash prizes up for grabs. Some extraordinary fish were weighed during this competition, including an 83.4kg yellowfin tuna landed by Locky Waugh fishing on the boat Sea Pest. A blue marlin of 162.3kg was caught on the boat Crazy Diamond by angler A.O’Donnell which took out the Makaira 50w combo and Hooker Lure prize for the heaviest game fish other than a striped marlin.

Winner for the heaviest striped marlin went to Kara Wood with a fish of 125.4kg, made all that much more meritorious given Kara is pregnant.

South of Houhora out of Whangaroa, yellowfin tuna are still being caught with the water only around 19.5 degrees or so.

Anglers on the charter boat Enchanter had a triple hook-up off North Cape on their way to the Three Kings. They landed all three, the best being a barrel of a fish that went 50kgs and providing some great tucker for the rest of the charter.

Swordfish are still running hot up, down and along the east coast. There are still a few fish around the Garden Patch, where plenty of swords are being hooked with a lot less landed! The most recent capture for Houhora was a 287.6kg swordfish caught on an electric reel while deep dropping for bluenose on the April 22.

While anglers have been busy on the gamefishing front, there has been plenty of action inshore.

Big schools of kahawai and slimy mackerel have been filling the bay with lots of food attracting big pods of dolphins, a big plus for the visitors to the Far North. With all the bait in so close the snapper and kingfish have been on the hunt!

The bite has been aggressive with your soft-bait being smashed each drop – fun fishing! Snapper can be found around the 20-metre mark right up to North Cape. This is where the commercial long liners have also been setting their gear.

Harbour fishing is still going off with a tonne of piper around, literally everywhere, and are especially evident at night when driving around in the boat. This is exactly why the harbour fishing has been good and I have been catching some great snapper in just half to one-metre of water…crazy!

There have been loads of mullet as well surrounding the mangroves. Big kingies have been rarking these mullet up right up on the banks, their bow waves evidence of the hunting taking place over the shallow water flats. A good opportunity for anyone with a saltfly outfit perhaps?

When the moon starts its new cycle and after the forecasted north westerly winds blow through, I am predicting the fishing will be even better for snapper and kingfish! Let’s wait and see!!

Until next report, tight lines… 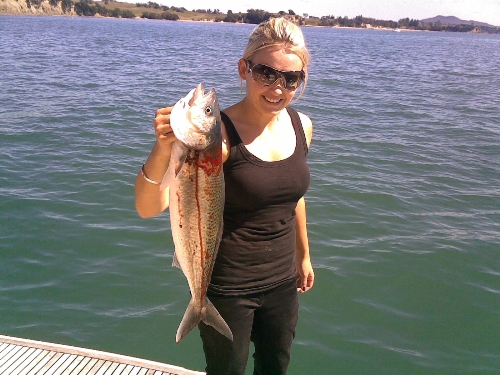