Monstrous swells in the far North

This week here in the Far North has seen some amazing sunsets, no wind days, and some monstrous waves!

Before the big blow we had a few days of exceptional weather. Not so much fishing but the weather was as good as it gets for fishing! No swell, no wind, and no fish! My mate and I took my four-metre tiller boat to Rarawa ( about 10 nautical miles from the boat ramp ) and fished everything from six meters out to 25 and only got one pannie near Simmonds for the whole day…shocking!

Heard of a man surfcasting off East Beach just before the wind and swell pushed in where he managed to bag seven snapper in a quick afternoon flick! This just shows the fish were getting a big feed right in close before the swell started pumping!

Ninety Mile Beach has also been very hard fishing according to the regulars who say it is that time of the year when the fish start to move out.

Back in Houhora, the john dory are back! The local wharf has been producing very good numbers with one guy getting four in a few hours! Big seven-inch soft baits on a reasonably heavy jig head due to current. I caught one a few days back on a ZMan 7” Bruised Banana, also the new Catch Livie in Jack Mac had a few inquiries as well. JD’s make for some great before school breakfast!

There is still plenty of mullet and snapper in the harbour. I set the net on the night of an unbelievable sunset, the best I've seen in a while! Left the net overnight and picked it up early morning before the predicted 20 knots blew in. The net had provided a good number of mullet which makes for some superb harbour straylining bait!

This big swell has been making one of the safest harbours in New Zealand for entering extremely hard! Basically, Houhora harbour has a bar at the entrance! My mate couldn't enter the harbour in a 50-foot commercial boat due to the big breaking waves - perfect for surfers!! This boat nearly got owned by Tangaroa! 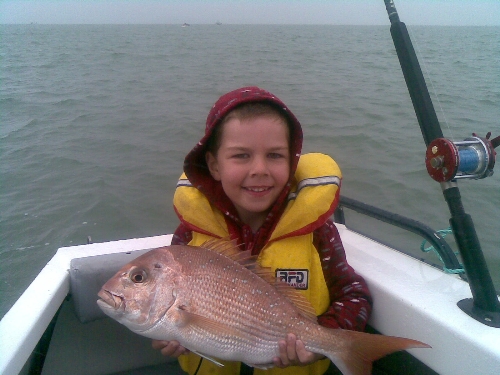