Where has the year gone?

Where did the year ago already?

Only two weeks ago we were swimming in board shorts at Mayor Island on the way back from some champagne bluenose fishing. Summer sure felt like an endless one, until we got a rude awakening around the eclipse and full moon!

We’re now less than three weeks away from the shortest day, and the weather the last few weeks has gone a long way to play catch up on the seasons. Now, I’m feeling nippy in a wettie!

But with a drop in temp and daylight hours, comes some prime fishing for one species in particular.

And that is snapper. I’m not the hugest fan of fishing the change of light as I get older, but I do love straylining, and yesterday I enjoyed one of the best sessions I’ve had in a long time, pretty close to home, in the middle of the day. Winter is prime time to lay down a mean burley trail in the shallows. A few hours in, a limit bag was in the bin to share with whanau, lots of pan size fish, with a big thumper the last one in the bin (the biggest coming on a slab of fresh kahawai). Fishing like that is pretty much the norm right up and down the east coast at the moment, thanks to the huge swell we had last week uncovering a whole lot of good food for our kelpie mates.

We’ve been having some champagne bluenose fishing the last two months, which should hold in there for a few more weeks. Fish up to the 25-30kg mark have been the norm on most trips. Bluenose would be my favourite eating fish, from nose to tail. The head, wings and frame along are often enough to sustain a family for a few day’s kai, I’ll often eat them fresh, and vac freeze the fillets which freeze down very well.

After a summer of predominantly chasing kingfish on the coast, the numbers are definitely moving out to deeper waters.  Dropping livebaits down deep becomes the go to, save your jigging arms for spring, which to be honest is not that many sleeps away.

A lot of sand moved around on the last big swell, and the coastal visibility is pretty rubbish. In saying that there are plenty of crays around. If you’re looking for some sweet vis, you probably want to get wide of the coast and the Aldies and Mercs are your best bet this weekend.

There has been a flotilla of boats chasing daytime swordfish locally this season with good results.  The last weather window saw many catches, and no doubt this Queens Birthday weekend will be the same. It’s only three weeks since the last marlin was caught, by Ultimate Game, there’s bound to be a few more lurking locally having the last feast before heading north.  Southern bluefin are now entering into the minds of the keen game fisherman, and we’ll be watching with baited breath what is happening south of East Cape for signs of the bluefin run.

If you’d like to work out the lay of the land on the Eastern Coromandel, learn a few things or simply enjoy a great day out on the water, catching some quality eating fish then get in touch.

This video sums up a lot of the action over the last few months – enjoy! 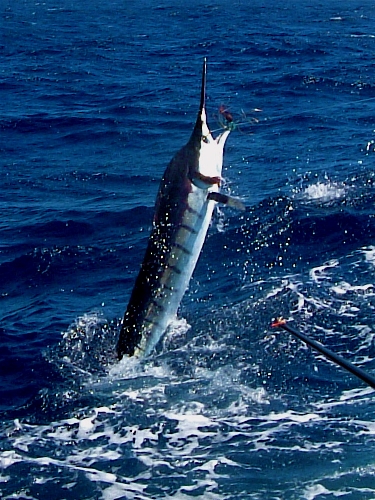