As we come up to the full moon at the weekend, there has been no sign of the work-up action dropping off.

For several months now Bream Bay anglers have been blessed with some exceptional fishing under and around the work-ups which have appeared consistently throughout the area.

I don’t think I have ever seen the bay as full of action as I have in recent times – it was a pity that I am based in Auckland and couldn’t travel to get amongst it when it was at its peak.

This region is not subject to quite the same fishing pressure as the Hauraki Gulf and as there  is only the occasional Facebook post giving the exact up-to-the minute locations, the work-ups remained relatively unmolested. Left to their own devices with minimal boat traffic, the action will go on for hours. The best place is to fish the ‘exhaust’, the area where the work-up has been, where all the bits and pieces of the bait fish slowly drop to the bottom where snapper, gurnard and other hangers on are feeding.

There have been a few sharks around. Last time out I was playing a nice snapper in 20 metres of water out from Uretiti beach and had it halfway to the boat when I felt it get very nervous. Line started peeling off my reel at a great rate of knots. I couldn’t stop it and within what seemed like only a few seconds the spool was empty, breaking the line at the arbor knot – bugger! The only possible explanation was the shark had taken off with my snapper, and eventually 300m of my braid! Some suggested it might have been a kingfish, but the pulling power of what I was attached (temporarily) was beyond even the biggest kingfish’s abilities

Changing tack, I find it always pays to have a sabiki bait-catching rig set up and ready to go. A very successful method around the workups is to deploy a livebait ‘dropped and dragged’ behind the boat. Set the reel with just enough drag to prevent an over-run. Kingfish is the primary target, but it is surprising how many decent snapper will nail the bait. I prefer to hook the jack mackerel through the nose as it tows better.

The hot lures for me have been the Glowbite ‘Grumpy Fish’ in orange and gold. Not only are they good on the snapper, but the gurnard have been all over them as well. These lures are quite unique in that you can load them up with your favourite bait additive to add to their attraction. The new Berkley kachi Kachi Dama lures have also fished well.

In the soft-bait department, my preference has been for seven-inch tails and long-shanked hooks to provide that extra little bit of bite coverage. In the ZMan baits, the Nuked Pilchard Glow, a great imitation of a pilchard enabling anglers to match the hatch, has been my go-to colour. The 8” ZMan Smokey Shad and the naturally coloured and pre-scented Daiwa Bait Junkies have been worth giving some soak time.

If my fishing diary is correct, over the next few weeks we will see fish appearing over the deeper reefs. Soft-baiting the shallow, kelpy parts of the Hen and Chicken islands with paddletail style tails and light weight jigheads at the change of light will be the go. Berkley Gulp! Nemesis and Grubs, once again in the more natural colours, have worked well in the past.

It is good to see the scallops in Whangarei harbour filling out in the shells and the bed in the deeper water off Langs Beach has been producing a good feed for those in the know – try around 20-25 metres.

I have A Kev’s Dredge which I will use as a prospecting tool. When I find a patch, that is where the divers come into play. 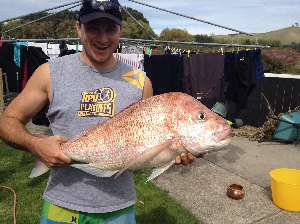