I get to play with quite a bit of new product in my job with NZ Fishing Media – boat, lures, tackle, and now artificial bait.

I am currently boatless, but before handing over our much-loved and used FC 535 Centre console Tackle Tester, we went out for one last fish from Mangawhai last weekend.

The reports were the snapper, kahawai and trevally were under the bait schools in 20-30 metres, and sometimes closer in, south of the bar heading towards Te Ari. They were not wrong.

It was ‘gentleman’s hours’, lines in the water mid-morning and the Fishing.net.nz bite time calendar not particularly promising. If you are into XOS kahawai for both sport and the smoker, this is where to find them presently.

After putting several 2.5kg plus models on ice, we continued our trek south to the area known to the surfers as ‘Forestry’ and it was over a small patch of light foul we found more birds, kahawai feeding strongly in patches, and this time with snapper on the bottom.

I had been given some Ecobait by its NZ developer John Baanders. Essentially, he has come up with a mesh cloth that is infused in this case with mussel or squid. It is a lot more technical than that, but that is the simplest explanation.

We were essentially lure fishing – soft-baits and sliders, so I cut some strips of Eco Bait and hang them on a Black Magic Snapper Snatcher ledger rig and drifted it behind the boat.

Fishing was not that fast, but soon my attention was grabbed to a bent over six-kilo outfit peeling line. What was on the end was the best snapper of the day – not a monster at just over 50cm – but proof the bait did work. This was confirmed a short time later when a 30kg mako took a liking to it as well, jumping all over the ocean before throwing the hook. I look forward to spending a little more time experimenting with this bait option and will be interested to see how it compares with a butterflied jack mackerel during a Hen and Chicks straylining session. Could we have a new ‘wonder bait’ on our hands? Time will tell.

Fishing has generally been good. Paul Senior was fishing in 40 metres of water off the Mangawhai bar last week and smashed out a limit of good eating snapper on Ocean Angler lures in a couple of early morning sessions.

I have also had good reports of some reasonable snapper, a number into the good old double figures, coming off the Three and Five Mile Reef areas off Whangarei harbour. This have mostly been caught by the bait and berley brigade.

The beach fishers – kites, kontikis and drones – have been producing some good catches, once again at the change of light and a couple of hours towards the bottom of the tide. They are still catching good trevally off the beaches in the vicinity of the refinery.

One bit of not so good news it the red week that has invaded the southern end of Bream Bay. The reefs off Waipu and Langs are in parts covered with it the divers report. If you are beach launching, avoid the weed like the plague as it does nothing good for your impellors and cooling system. 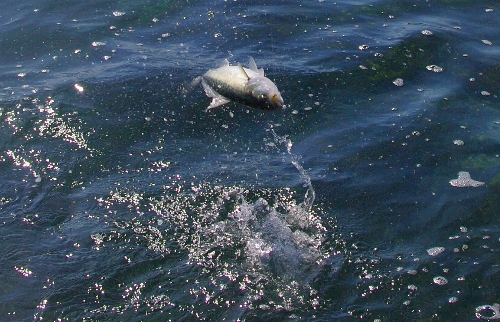