So, its blowing easterly, now there is a surprise!

Many of us sick of ‘those bloody easterlies’ we have been experiencing on the east coast of the upper North island – and being based out o Mangawhai, I am no exception.

I was bemoaning the fact the Mangawhai bar had been closed out for a week or so, preventing access in my FC centre console to what is normally some good fishing, while talking to Dave Gurr at the local Top Catch store.

Have you fished the estuary yet? He inquired.

The truth was, I hadn’t, preferring to wait until the offshore conditions settled down.

He mentioned to me several spots in the estuary worth a shot and this was reinforced by Tony Orton and Rob Cameron who had taken their family fishing there and caught some nice snapper last weekend. His suggestion was to go for a run up the estuary by boat at low tide and it will soon become obvious the places to wet a strayline rig.

Berley is a big part of the equation as well as having light terminal tackle. Use six kilo mono maximum and tie the hooks straight onto the mainline. If you need to weight the bait slightly, you can buy split shot style sinkers that you can close around the line with a light squeeze of your pliers.

My suggestion would be a 4/0 circle hook to make releasing any smaller fish easier and safer.

Tony told me, and I experienced this for myself last autumn, to fish the last half of the outgoing tide that coincided with the change of light.

More sage piece of advice offered by Dave was to go across the island to the Kaipara harbour, a regular haunt of his, and just 30 minutes away to the nearest ramp. He says there was some good snapper straylining to be had on the channel edges.

I spoke to a couple of the keener Waipu kayak fishers, and they have braved the surf on several occasions to catch some nice snapper at the 20-metre mark of the Waipu Beach and out from the rivermouth

It is times like this that I wished I had an electric Kontiki or a fishing drone. While the latter are restricted to wind conditions below a certain speed, almost nothing prevents an electric kontiki from being fished.

The technology the best of these contain with GPS driven navigation systems is wonderful and they have no trouble operating in a couple of metres of surf, pulling out the maximum allowed 25 hooks.

Some of the electric reel spools contain well over a kilometre of line so it gives fishers plenty of options. If you are new to the Bream Bay area, you need to be aware of the papa reef system that runs intermittently along the southern half,  and these are prevalent from Uretiti south towards Langs Beach. Over the years I have rescued numerous kontikis that have had their hook sections snagged on the foul which is, in the main, well covered in trace-grabbing kelp.

Reports from the Whangarei harbour have indicated mixed results. One wily angler motors up the channels to the very shallowest parts, almost hiding in the mangroves, rowing the final stretch to fish in a couple of metres of water. I have yet to get the exact location (and Whangarei Harbour is a big place!), but double figure snapper feature regularly among his catch which he uses a couple of handlines for. After dark is his best time and he says having a wooden dinghy is the secret – alloy is too noisy apparently!

Looking at the forecasts at the time of writing this a week out, it looks as though the middle of the next week might be your best shot for a fish. 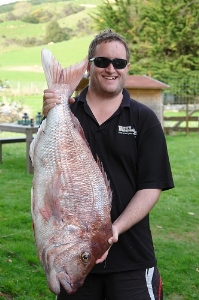