Depositing on who you talk to, the snapper appear to be ‘everywhere’ at the moment.

I have spoken to several people over the last week and they have been fishing in the different parts of the bay with success.

Tony Orton, Offshore Adventures, was filming in the Bream Tail area, having launched out of Mangawhai, and caught so great eating-sized snapper in 20 metres of water out from Langs Beach.

A couple of diehards who run the gauntlet of the Waipu River bar had good success on the softbaits on the lumps of foul 14-15 metres deep. One was fishing the new Gulp! Paddle tails in mackerel colours and says it was the go-to lure on the day.

This foul and the lumpy ground off Uretiti holds good numbers of john dory. While you might snag the odd one on a lure, small jack mackerel almost come with a guarantee.

Use a single hook ledger rig, tying the branch off using a three-way crane swivel (this allows the bait freedom of movement without tangling in the backbone). Hook the live bait through the nose and drop it down.

This comes with a warning though - kingfish and snapper love the same bait so make sure your tackle and knots are up to the task!

Talking of kingfish, Tony and I gave the Whangarei harbour marker buoys an early morning shot for a kingfish last week. We cast a stick bait at every marker starting just outside the marine reserve opposite the wharves, right out to the lead marker.

We had several follows and shots, with one hook-up, only to have what we suspect was a bronze whaler come and nails the fish while we were mucking around taking the money’ publicity shots - bugger.

Another shark encounter happened around the bait schools at Coppermine Reef at the Chicks. The angler had foul hooked a true ally on his surfaces lure and was just about to pull it aboard when it was smashed, literally out of his hands, by a bronze whaler boat side. My suggestion - use your net!

The scallops in the most popular beds have had a hammering over summer and are providing lean pickings at the moment accord to the reports I have had from several divers.

Ending on snapper, the team at Mangawhai Top catch are always good for the genuine oil. They mentioned the fishing was good in 40m off Mc Gregors Rock with 120g Daiwa Kogha orange sliders doing the business.

The last time I was out there were some good anchovy schools in the bay, marked by lots of smaller seabirds (terns mainly) but the snapper had not found them when we were there - just SE of Three Mile Reef. 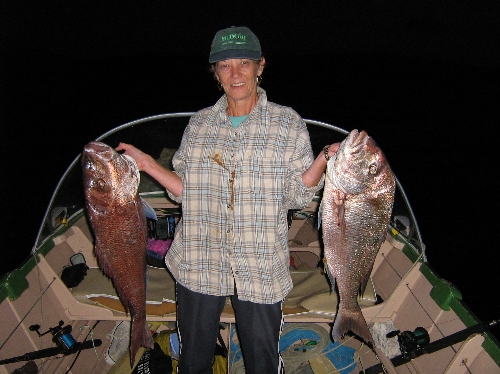