The fishing has slowed considerably in Bream bay, but there is still some action to be had reports Grant Dixon.

There is not a lot to report at the moment, especially on the snapper front. All the usual haunts have made catching a feed hard work over the last few weeks. Often the fish will be showing on the sounder tucked hard on the bottom, refusing to eat.

Sometimes adding a scrap of squid to your slow jig will help entice some action – perhaps not for the purist lure fishers, but if it is a feed you are after, all is fair in love, war and snapper fishing.

Anglers have had some success drifting between the 20 and 40 metre mark off Ruakaka, with both baits and lures. While I am very much a lure convert, at times a bit of smelly old pilchard, squid or skipjack will do the business.

One crew spoken to last weekend fished the bait schools around Coppermine Reef at the Hen and Chicks, pulling a few reasonable snapper and kahawai from under them. One changed his soft-bait rig to a very light quarter ounce head and a minute curly tail grub in a clear colour. He had some great fun catching and releasing trevally which were all over his offering, keeping a couple that were turned into sashimi and oka (raw fish done with lime juice the Pacific Island way).

Sometimes chasing trevally can be frustrating, as they will not be interested in anything but the smallest of baits. The solution here is to get an 8/0 treble with some lead sheet wrapped around the shaft – or at a pinch a once-ounce ball sinker pinned on the trace with a toothpick against the eye – and toss it into the melee, retrieving it with short,  sharp bursts. Not sporting, but there is every chance you will snag yourself dinner. You just have to keep a watch out for the free divers chasing kingfish, there are no points for hooking one of them!

Another method is to troll a livebait or a rigged skipping dead bait around the school edges. But be prepared, a black marlin or a decent shark might just well be patrolling the area looking for an easy dinner and stumble across your offering.

Then can be a bit of ‘spatial conflict’ here between thw divers and the anglers. If you see a dive boat, clearly marked with a flag, give them some space. Likewise, if you are a diver and see a boat with anglers casting to schooling fish, go find your own workup, don’t jump right in on top of them. It cuts both ways.

On the gamefish front there have been a few marlin appearing in the ‘golden triangle’ marked by the Hen And Chicks, Mokohinaus and off Ocean Beach. One experienced crew did a couple of days trolling and livebaiting in the area and while they reported plenty of bait schools, dolphins, and bird life, they only managed to raise one fish that came up on their dredge then swam away. Too well fed?

Another crew the week before came across a work-up on their way to the Mokes that had four marlin rounding up the kahawai, but they had to drive away as they were not geared up for gamefishing.  Plenty of time yet for the billfish to turn up in decent numbers. 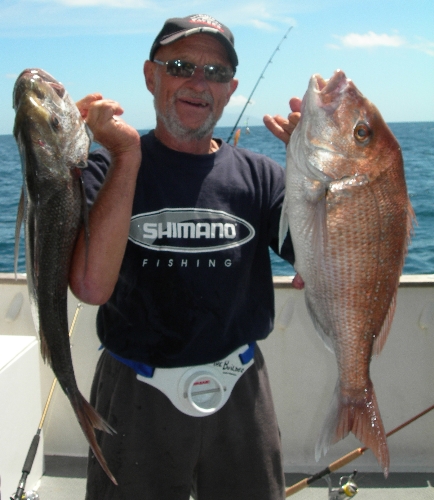