Locals are saying the fishing has never been better in Bream Bay as it has been in recent weeks.

The work-ups have been intense throughout the bay, as far wide as 40 metres as well as tight in against the main beach from Ruakaka right down to Langs Beach,  Bream Tail and beyond.

One Waipu regular has been watching out for the gannets to start working and he paddles out in his kayak, only to be smashed by large snapper and respectable kingfish. Leading up to the recent full moon was ‘insane’ and this angler and his friends have put back numerous snapper over the 20lb mark, along with kingfish to 25kgs – all on soft-baits.

At times the fish have been picky, only slamming soft-baits that have ‘matched the hatch’ – pilchards and jack mackerel – while at other times size and colour of the tails has not made a difference.

Offshore Adventures charter operator Tony Orton described action enjoyed by his clients off Bream tail as being ‘the best I have every experienced inshore’. The area from 12 metres inshore of MacGregor’s rock right out to the 30-metre mark was alive with snapper and kingfish working over the schools and this has continued to a lesser degree all this week. Take your binoculars to pick up the bird action and you will be in.

Added to the mix have been some good ‘by-catches’ of trevally and john dory, this writer having landed a 55cm JD on the fringes of a work-up.

When the gannets haven’t been on the job, shearwaters sitting on the water are a good indication of life below. Pick up some jack mac livebaits and run these deep under the birds and you will be surprised with what you might encounter – including the odd mako or two.

The water temperature is over 18.5 degrees and it was only a couple of summers ago we encountered two feeding marlin just out from Bream Head in early December, so time to sharpen the game hooks and have a livebait handy!

Know a kid that loves fishing? Share a video, story or picture showing your kids love of fishing and they'll be in the draw to win an awesom... more > 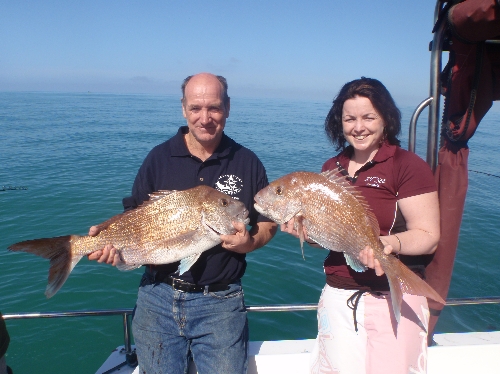