Right up until the last day of the scallop season (March 31 for this area) the fish in the Whangarei Harbour were in good nick and plentiful. The likes of Urquhart’s Bay were still producing scollies that while the bed had had a good picking over, still had plenty to offer.

I had my last taste of fresh scallops the last week of the season and they were still in  magnificent condition.

The crayfish too have been around in good numbers. Our divers have found a large resident packhorse population with plenty of legal-sized ones amongst them. Remember these are measured differently from spiny reds. Take the tail length along the underside in a straight line from the rear of the calcified bar on the first segment to the tip of the middle fan of the tail which must be at least 216mm (male and female). Compared to the reds, to be legal the fish must be quite big, so it pays to measure them, not rely on guesswork

The size of the spiny reds has been down considerably these last two season, thanks in the main to winter commercial pressure which in the inner Bream Bay, especially towards Bream Tail, has be unrelenting as their regular haunts have been overfished.

There were to be new rules in place by April 1 that affected the southern end of Bream Bay encompassed by the CRA2 management area, but these have been delayed and likely released to come into play mid-year. The daily recreational bag is likely to go down from six to three crayfish with a reduction in the commercial quota.

The anchovy schools have produced some great action the last couple of weeks. The predators have pushed the bait into the southern end of the bay, starting from the Waipu Rivermouth.

Look not so much for the gannets, but for the smaller birds such as terns and ‘mutton ducks’ often sitting in little gatherings above the bait. Drive around then and you will most likely see the bait below them.

I like to soft-bait these areas, casting out to the sides of the schools when the predators will be lurking, as opposed to right into them. Among the predators have been some good john dory. Paddletail soft-baits fished on the drop seed to work well on the johnnies.

I am not sure if the snapper we caught the other day at a 50-metre pin between Bream Head and the Chicks were either late spawners or on their second go around – I suspect the former.

Thirteen of the 14 we binned were males with the grey under their  throats and found to be full of milt when processed. There was only one female and she was laden with roe as well.

Fishing closer to shore the bite has been good in all the usual haunts, but the fish very much in post-spawning recovery mode – lacking any condition and with little in their stomachs.

One fish that was proudly shown to me and claimed to be a ’20-pounder’ measured 80.5cm – generally on the money for that magic mark – but weighed 18.45lbs, well shy of trophy fish status. It was quite slabby and if it had been a trout, you would have dug it into the garden as compost!

For those into their gamefishing, there have been some relatively reliable reports of billfish off Ocean Beach in 80 metres, but I still haven’t heard of anyone hooking up there yet. On a trip mid-week to the Mokohinaus I marked plenty of bait deep in around 80 metres out from Mangawhai, but there was no surface action.

Out wide we managed some steady snapper action with the best fish, caught on a livebait meant for a kingfish, going 75.5cm. There were good numbers of kingfish on offer, but we had issues with sharks.

Mangawhai based Charter operator Tony Orton has been having a great run on the snapper at the Mokohinaus, often soft-baiting while livebaiting for kingfish, with great results. His favourite soft-bait tail has been 5” Bruised Bananas on a one-ounce conventional jighead.

Tony reported the kingfish action has been a bit patchy but there have been some good fish caught and released over the deeper pins. He too has had trouble with the tax collectors. 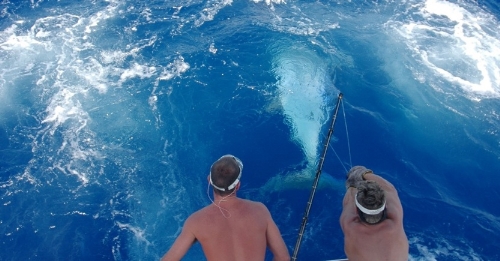