Over the last week, the constant easterlies have kept all but the bigger boats from venturing into open waters.

The Mangawhai bar has been a no-go for a week now – you know it is not workable when you see two of the charter boats check it out and then turn around and put their rigs back on the trailer. Safety first. If you are here on holiday and only have a short time to get some fishing in, don’t be tempted to just ‘give it a go’.

The alternative for a few days before the arrival of the current big easterly swell was to trail the boats to Marsden Cove and launch there, accessing the good fishing through the Whangarei Harbour entrance. But, as I write this, that is not an option – the Bay is a seething mass of whitecaps.

It is a shame because Bream Bay had started to fire again after a short week-long lull. The holidaymakers had no doubt read the reports and heard the jungle drums beating out the message –‘the snapper are on’ – only to be unable to get among them.

So, what to do to get your fishing fix? A close-by alternative is to fish the Kaipara Harbour from the likes of Port Albert or Tinopai. The other is to wet a line in the Mangawhai and Whangarei harbours.

Going past Marsden Beach a week ago to the eastern end of the fuel dock, a dozen or so surfcasters were trying their luck off the shore, and there were several had bent rods among them. I was told good trevally was being caught there.

The birds have been working hard in Whangarei harbour, snatching feed from the anchovy schools pushed up by the kahawai. Little Munro, Parua Bay, and Takahiwai have all seen this work-up action, with some reasonable catches in their vicinity. One jet ski fisher I spoke to took a limit-bag of seven snapper to 58cm, fishing under six metres of water near Snake Bank. His advice: use as light a jighead as possible and add to these smaller 3.5” tails in ‘bait’ colours. He had enjoyed the most success on the lumo grub tail and found the last 2-3 hours of an outgoing tide, matched with a change of light, fished best. His other advice was to drop down in trace weight; he had found 10 and 15lb fluoro leader was working well, producing the goods for him. The downside, he broke off a nice kingfish when the 10lb leader parted. 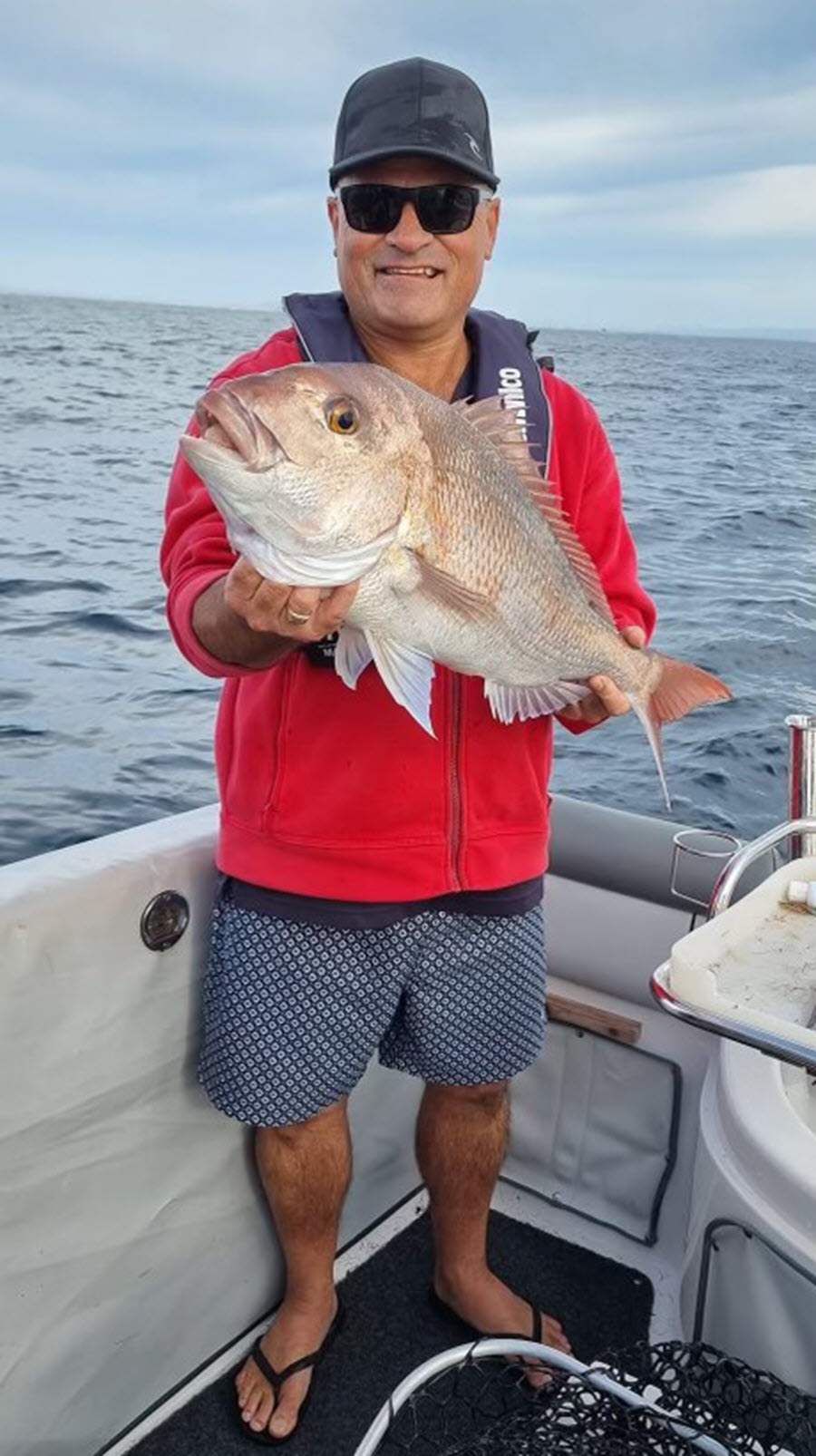 Where there is nowhere as much fishable water in the Mangawhai Harbour, there is a hole up near the ski lane and some papa reef structure in the channel just a little bit south of the beach ramp popular with the jet skiers and other smaller craft – it’s worth a fish. Bait and berley is a good option here and, once again, it’s a change of light scenario that seems to work best on an outgoing tide.

Before the weather change, the 40m middle Bream Bay around the 40-metre mark near where the ships anchor (#2 Anchorage; the one furthest SE on the chart NZ2519 Approaches to Marsden Point) was holding good snapper with whales, dolphins, and gannets in attendance too. It has been in that proximity for several weeks.

I find fishing the ‘exhaust’ of the workups is where the better fish are located.  It is good to see people learning to fish the area where the workups have been, rather than charging into the middle of the action, putting the bait schools down.

Before the last blow, we had the most success on metal lures – sliders, inchikus, and micro-jigs over soft-baits – but that can change quickly so have some options ready to deploy should one particular lure type (or livery) or fishing style not be working for you.

For more information about bite times at your favourite spot, go to https://www.fishing.net.nz/fishing-advice/bite-times/