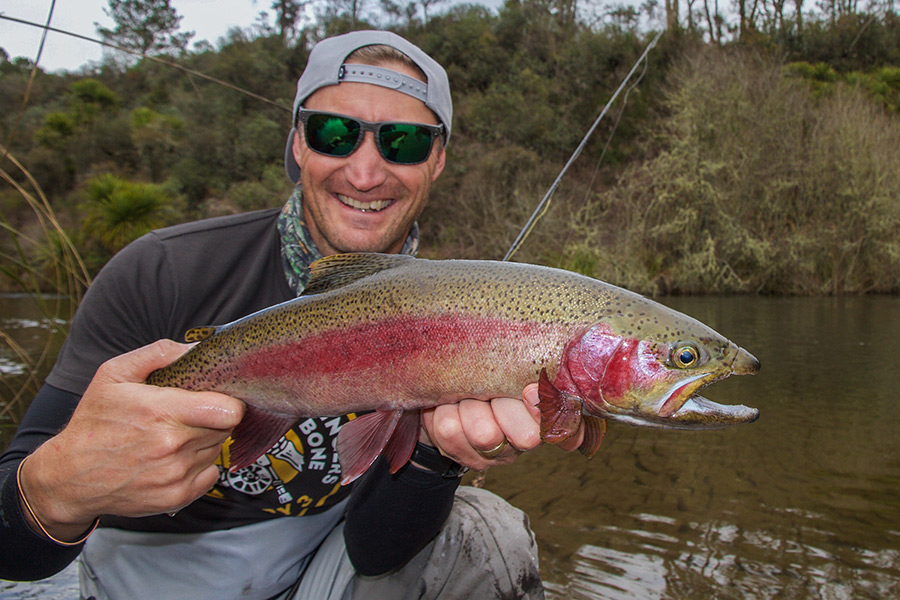 The weather leading into opening day for the Waikato / Bay of Plenty regions was a little rough with some heavy periods of rain just a couple of days out from October 1.

This year saw a trial where the big lakes of Tarawera, Rotoiti and Okataina did not open until the first weekend of October which thankfully for this year was October 2.  A little confusing when places like the Ohau Channel were open on October 1, the Friday,  but the lake that it feeds was closed until the next day..

On the fishing front the channel produced some lovely fish early on at first light with both browns and rainbows been caught and then it shut down later on in the morning.

I went high up into the hills to try and find clean water, the river was well fishable but running six inches higher than normal flows.  The fishing was great with rainbows to 4.5lb caught and a few even came up and took the dry fly which is the ultimate for me.  On these smaller rivers I typically run a dry, dropper rig so I cover both avenues.  Fish will happily move to intercept your offerings so don’t think that you always need to dredge the bottom to be successful.

Lake Rotoiti fished well on the Saturday with mates landing fish up to seven pounds. They commented on how busy the lake was, but most people were catching fish.
This time of year, the fish will be spread out throughout the lake depths, so technique is not as important as learning how and where to find the fish.  With this mind early morning will find success in both harling or fly fishing up into the shallows and as the sun gets higher, trolling, down rigging, jigging and soft-baiting will all go well.  When jigging we often fish a darker fly on the bottom this time of year and come up to two smelt flies. It is amazing at how often that bottom fly will catch big koura and bully eating lunkers.

I then jumped across to the ocean out of Bowentown when I saw there was a small glamour window and had some great soft baiting and micro jigging in 15-20m of water out in front of Matakana Island.   Make the most of these little windows as the snapper are in close, the gurnard are there in good numbers at present – these are hard beat as a table fish.

Best of luck when you get out and now hopefully the good folks of Auckland will be able to get out and run their boats and spend some time out on the ocean.