Seventy seven-year old-angler Bill Walsh (pictured above) headed off some top competition to win the 2019 NZ fishing News Vava’u ‘International fished in the Kingdom of Tonga at the end of October.

Bill, who hails from Kinloch, Taupo,  tagged and released two blue marlin on consecutive days and then landed a 41.7kg yellowfin to take the $1000 cheque and a magnificent local carved trophy. Runner-up was Rhod Lloyd who set a tough pace early in the contest with a 218.00kg blue, but failed to follow through.

Rhod did not go home empty handed. He was a member of the ‘Green Machine’ combo that took out the top team honours, fishing with Eric Woodward, Markus Wunderlich and Peter Sloane, the latter being in last year’s winning team. They amassed 435.2 points to finish just ahead of the Maroon Marauders on 396.8 points.

Competition was close after the first three days, with any one of four combos realistically in with a chance with a day to fish. After some good action, the last day proved something of a fizzer fish-wise with just one sailfish tagged and released and seven mahimahi weighed.

The top scoring lady angler was Hawkes Bay’s Cheryl Leonard, a first-time gamefisher. On board with the Black Sheep team, Sheryl tagged and released a blue marlin and backed this up with a 47.10kg yellowfin to take the ladies trophy.

Cheryl had the misfortune on day of having a blue marlin estimated at 200kgs plus to the boat, leader in hand, but unfortunately didn’t get a tag into it before it ducked under the boat and cut itself off. Still, a caught fish, but a non-counter for the contest as it wasn’t tagged. 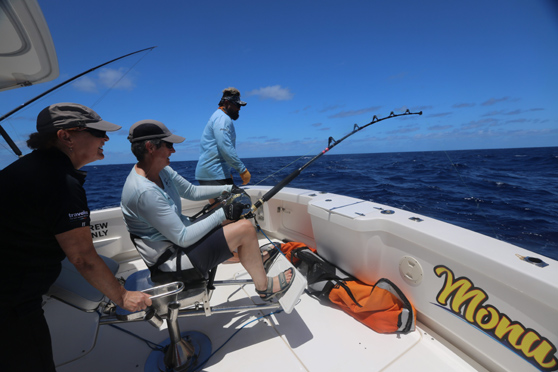 Top lady angler Cheryl Leonard Leonard in action aboard Pook Twoomey’s Monu’la, which was top boat by some margin in the contest. Team mate Kathleen Wright steers the chair

Runner-up in the ladies was Nod Kininmont not far behind with two great yellowfin and a mahimahi, the best of the former weighing 65.6kg – good enough to take the tuna trophy. Nod was also fishing in the Black Sheep team. 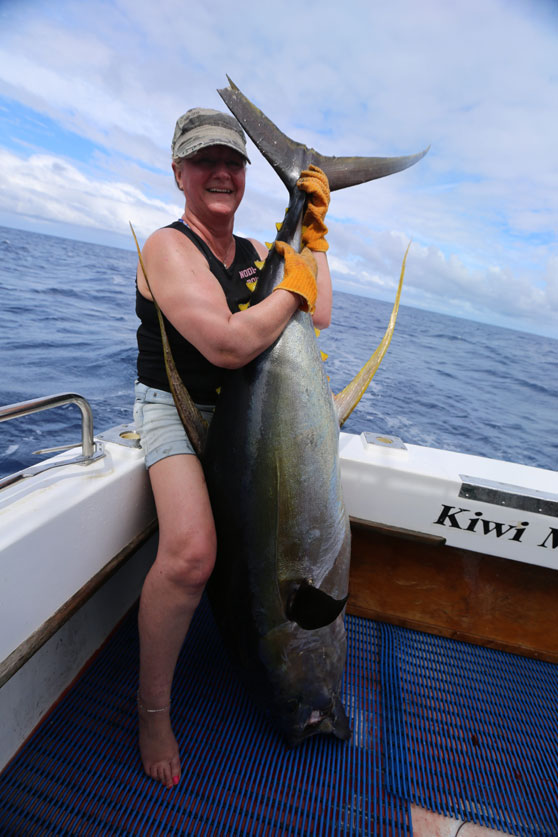 The best yellowfin was this 65.6kg tuna landed by Nod Kininmont aboard Kiwi Magic on day one.

Tony Bielawski, a member of the Lily Whites, was top mahimahi angler with a 16.2kg entry while teammate Connor Spencer landed a contest best wahoo of 17.1.

Connor had the dubious honour of Taking the Mug of the Week prize that saw him have an ‘accident’ with the tag pole, sticking it into his upper thigh rather than a fish – don’t ask!

The hard Luck honours went to Eric Woodward who on day two found himself in a similar scenario to Cheryl Leonard, with a huge fish estimated at over 300kgs on the leader, but unable to get a gaff or tag into it to make it count for the tournament.

This tournament is unique in that the teams draw for the boats on a daily basis, no one knowing who they will be fishing with until the night before. Competition among the skippers is always keen with this year Pook Twoomey and his 40ft Caribbean Monu’la pulling away from the field with 566.1 points, comfortably ahead of the opposition lead by Chris Chapkoun aboard Fighting Lady on 334.40 points. Third place went to Press Play, on 319.0 points, with Manoa Pulini at the helm.

The event is held at the Tongan Beach Resort and is hosted by NZ Fishing News in conjunction with travel&co. New Zealand High Commissioner Tiffany Babington was on hand to present the trophies.