A petition has been launched by private group Stop the Lockout to prevent the no-take areas around Motiti Island from being implemented. Stop the Lockout have also launched a website and a Facebook page to raise awareness for this issue.

After a lengthy court process in which it was determined that regional councils have the jurisdiction to impose fishing controls under the Resource Management Act, the Bay of Plenty Regional Council are now required to implement no-take zones around Motiti Island. Included in the no-take zones are the Okaparau Reef, Brewer and Tokeroa Shoals, Schooner Rocks, Plate Island and, of course, the infamous Astrolabe Reef (the site of the 2011 Rena disaster).

Local iwi and hapu have publicly opposed the decision, as have a significant number of local anglers.

“We are concerned,” write Stop the Lockout on their Facebook page, “that despite 55,000 people expressing concern about the proposed lockout following a Facebook post by a local charter operator, very little has happened since.”

This comes after the National Party also launched a petition last month requesting “the Government change the law to stop the fishing ban being applied to the reefs around Motiti Island and that the accountability for managing fishing stocks be returned to the Ministry of Fisheries (MPI).”

If you want more information on this issue, visit http://www.stopthelockout.kiwi/.

An IGFA world all-tackle record was just one of the many great fish produced during the 2019-2020 season of the DB Export Competition, a nat... more >

Whanganui’s David Higgins is the 2019-2020 Furuno Snapper World Cup winner after he landed an 86.0cm specimen off the Whanganui coast ... more >

Great Barrier Island locals plead for the government to loosen up on COVID-19 fishing laws as many locals rely on fishing as a means of livi... more >

Covid-19 coronavirus: Gone lockdown fishing - from the back porch 04 April 2020

Some may wonder whether drone fishing is still allowed during the current lockdown period. An Auckland fishing company shared a photo of a s... more >

Launched in 2019, the Penn Prevail II rods have undergone some subtle refinements...... more >

Evoy's new zero-emissions electric outboard motor and powertrain solution will put it at the pointy end of the all-electric market..... more > 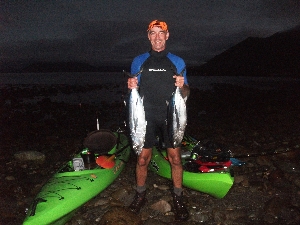