SeaWolf Expeditions will ply the Pacific ‘If it hasn’t got two motors you can’t call it a sportfisher’ was the mantra Tom Francis was confronted with when planning his long-range charter vessel Sea Wolf, which at the time of writing was only a few days away from launching in Whitianga.

The vessel, designed by noted Kiwi naval architect Craig Loomes and built by Brian Harkin in Whitianga, is radically different from an orthodox sportfishing boat.

It is long, narrow, has round bilges and a single engine, flying in the face of conventional design.

Craig has been involved in the design of several ‘different’ vessels, perhaps the most noteworthy being the 90ft wave-piercing Ultimate Lady, which Tom has crewed on and skippered since 1998.

Tom and Ultimate Lady have been based in the greater Pacific for the last 15 years, most recently making Tahiti, French Polynesia, its home waters.

Tom saw the potential for a long-range sportfisher to explore the more remote hotspots in the region.

“The main issue is logistics, especially around fuel. The closer destinations are well served in this regard, but to fish the out-of-the-way places is something of a supply nightmare,” Tom says.

“We plan to open these places up to fisher folks who want a great sport fishing adventure which is easy to get too onboard a state of the art sport fisher with a professional and experienced crew. The Japanese were not wrong you know! The longliner records of some of these areas are mind boggling. French Polynesia is well protected now from foreign fishing fleet, this means we  get it all to ourselves.

“The Marquesas, Tuamotus, Gambier, Australes are all places we have fished onboard Ultimate Lady and they are incredible fisheries, not yet fully discovered.”

What Craig came up with was a particularly efficient hull design which will see the boat have a theoretical range of 4000 nautical miles travelling at nine knots.

One of the keys to this performance is a CPP (controllable pitch) propellor where the angle on the blades can be changed to produce forward and reverse while the shaft spins in the one direction. The CPP is also designed to make large ships very agile with regard to stopping and accelerating, and offers reduced prop walk.

“One of the key features I am looking forward to testing is the ability to set the engine RPM to 80%, and control the pitch from full ahead to full astern in three seconds. This means the engine is fully spooled up and all the power is available at the prop. There is no lag time, which is an issue for sport fishers and the latest electronically controlled engines today. This is not new technology – ships and large fishing vessels have been using it for years. I liken it to being on a pushbike and changing gears to go up and down the hills.”

It was suggested the 14.9m (49ft) craft would not be manoeuvrable enough to chase gamefish, especially at the end game, but Craig’s round bilge/transom design reduces the lateral resistance which should make it a nimble boat going backwards.

“I wanted the boat to be extremely nimble. The hull is actually more efficient in reverse than it is going forward (in a flat sea state, where the bow offers little advantage). We are expecting to see some incredible speed backing up. I wanted to push the boundaries of speed in reverse, because we have had some tense moments on Ultimate Lady where even at 10 to 12 kts in reverse, we still have trouble keeping up with some of the big blue marlin we have encountered here in Tahiti.”

Tom says it is not all about straight line speed, but rather accelerating quickly and being able to close the short gap very quickly. This is where the Hundested CPP will play a big role. 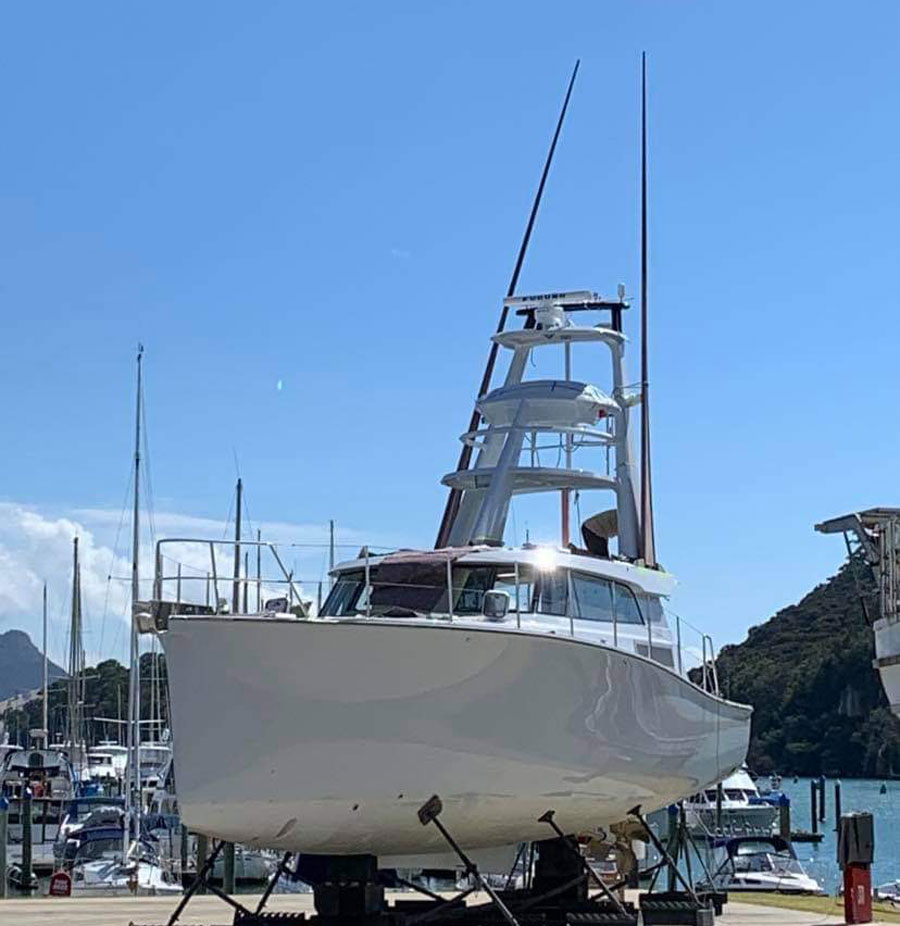 “Keeping the transom from burying is the other issue and Craig’s design should mitigate this.

“I think the proof of the design’s effectiveness will be fish on the deck or at the transom.”

Tom is in the right part of the world to put any theories to the test, with an abundance of billfish, tuna and other great sportfishing species such as dogtooth tuna and GT’s in the waters he plies.

As mentioned, when researching the build, Tom came up against the ‘you have to have two motors for sportfishing’ from the American motor suppliers.

“Of course, they wanted to sell two motors instead of one and they were stuck in their thinking, but that didn’t fit with what we wanted to do efficiency wise.

“Sport fishers spend 80% of their time at 6-9 kts. So I wanted a boat efficient at this speed, not at 35kts! Trolling is what we do 80% of the time! Sport fishers that do 35-50 kts have their hull shape, engines and drive lines all designed and optimised for this speed – not trolling speed. That’s wasted energy. Sure, some fisheries demand long runs to the fishing grounds, and fast boats are great here. But my time spent on Ultimate Lady has shown me we very rarely go faster than 12 kts. This means we always have a lure in the water and we are comfortable. This enables us to fish further afield and stay out longer. It’s the hare and the tortoise story – going slow has only improved out fishing experiences.

Another option Tom explored was the use of a pod instead of the conventional shaft drive, but that too fell by the wayside. Ultimately, the power source is a single Man LE424 520HP diesel shaft drive which will push the vessel along at a 20-knot cruise speed.

“Pods really are not that efficient at trolling speed. The small fast spinning props are designed for high speeds. They also are not commercially rated. Note the engine on SeaWolf is heavy duty rated. This means 1800rpm WOT, 100% of the time for unlimited hours per year, i.e. my MAX speed, is also my cruise speed. The heavy duty engine also 600 hour service intervals and 18000 hours TBO (time before over haul) means less downtime servicing and more time fishing!”

Tom’s operation Sea Wolf Expeditions will work together with the existing Ultimate Lady operations, offering both mothership and stand-alone charters.

“It gives us great flexibility, especially among larger charter parties, some of whom might want to go light tackle fishing offshore while others could opt for jigging and topwater fishing inshore. Ultimate lady will provide the luxury and comfort at the end of the day for everyone to enjoy.”

Sea Wolf is packed full of all the comforts of home for a maximum of four guests, including plenty of refrigeration, gyro-stabilisation, an icemaker, dive compressor, air conditioning throughout and a watermaker, along with a full suite of the latest electronics. There is a forward accommodation area with sleeping arrangements for seven people, including the crew in six single and one double berth.

SeaWolf has been outfitted with the latest, most sophisticated fish finding equipment on the market.

“Over the years, we realised a single brand manufacturer could not fulfil our requirements for fishing electronics. So, we selected the best of the best, regardless of brand or network compatibility.”

The kit includes an Omni Sonar 60htz; a Simrad ES80 sounder with an ES80 38 -10 transducer; Furuno WAASP and radar; Simrad and Furuno TZ3 monitors; and a Nav Com pilot. The Simrad ES80 sounder is next level technology, and is the only sounder approved for scientific studies. It has the ability to mark individual fish at more than 400 metres, can tell you the size and amount of fish present under the boat, and also where the fish are located within the beam transversely. The sounder also reveals what species the fish is with a frequency signature return. The power output of the ES8038-10 is surprisingly low at only 1.5kw, but don’t let that scare you – it can easily read the bottom at 3800m.

The MAQ sonar is an OMNI sonar capable of marking marlin at 900 metres from the boat, and tuna schools and sea mounts much, much further away.

A full range of Okuma tackle will be available to guests from chair rods for billfish through to casting and jigging outfits for the inshore/reef opportunities that abound in the region.

Tom was involved with Ultimate Lady’s build back in 1996, and the vessel was launched with Tom on board as crew in 1998. He took over the helm in 2001 and he will continue to split his time between this vessel and Seawolf.

While there could be worse places in the world to hunker down during COVID than French Polynesia, Tom is itching to get aboard his new vessel and put her through her paces.

“Craig is an extraordinarily talented and proven designer, so I have every confidence in the outcome.”

The plan, which is obviously flexible due to the pandemic and shipping availability, is to launch and sea trial SeaWolf before transporting her to Tahiti in April. Tom hopes to be fully operational by the end of July at the latest.

“Then all we need are the anglers once the borders are opened – we know the fish are here.”

For more information, check the boat and the operation out at www.seawolfexpeditions.com