Photo: New Pegasus Bay GFC president Mitch van Eekelen is the youngest member to be elected to the post and he has a eye for the future of sportfishing.

Pegasus Bay Gamefishing Club is used to having record holders in their midst, as a check of any recent NZSFC’s National results will attest.

Last month, the club set a record of a different kind when they elected 23-year-old Mitchell van Eekelen as its president. He’s the club’s, and possibly the country’s, youngest ever president.

A club member for 11 years, Mitch brings a new level of enthusiasm to the executive and has a view towards getting the club more involved in what recreational fishing will be like in the future. His first initiative was to promote club submissions to MPI on the recent National Blue Cod Strategy and foster greater participation in the Rescue Fish Campaign.

In Mitch’s words, “If you’re not part of it and you lose it, you don’t get the right to complain about it later.”

Mitch is an active participant in sustainable fishing methods and wants to promote a code of ethics which will become a foundation document for the club. He asks, ‘How can we advise other people what they should be doing if we aren’t doing it ourselves?’

Mitch brings a new perspective to the club where traditionally older members have decided on the path and focused on day to day fishing, trips and competitions. Mitch has a longer-term perspective and wants to see younger generations adapting to the ever-changing recreational fishing landscape.

He has a solid fishing pedigree, starting off as a wharf rat before graduating to a club representative at the NZSFC Nationals. He achieved Champion Junior Angler on more than one occasion fishing the albacore section, and was last year’s albacore 2kg Line Weight Champion.

Mitch travels around the South Island to fish with his brother and father, from the deep south on the west coast at Jackson Bay, through to Moeraki and Kaikoura on the east coast. He runs his own boat, a Fi Glass Fireball with a Johnson 90 on the back, and is a strong believer in the benefits of completing boating and safety courses through Coastguard.

While the Pegasus Bay Game Fishing Club is one of the smaller clubs in New Zealand, it punches well above its weight, and with Mitch at the helm, this tradition is sure to continue into the future. 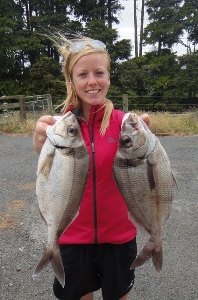 About to get stuck into gutting the Terakihi... - Oakura, Taranaki