After much debate, the Motiti Protection Area will officially come into effect on August 11.

The no-take and no-anchoring zone is made up of three protection areas around popular Bay of Plenty reefs. According to the Bay of Plenty Regional Council’s website, this has been implemented “to protect indigenous biodiversity and acknowledge the significant marine, landscape and cultural values in the area.”

Chairperson of the Strategy and Policy Committee Paula Thompson says this marine protection area is the only one of its kind in Bay of Plenty and offers an important opportunity to better understand the health of the marine environment and the ecosystems it supports.

“We’ve already begun monitoring these reefs and the taonga species that call it home but once in place, we’ll be looking to establish a benchmark so in the future we can see if the protections are working,” she says.

The decision has come after a long and complex process, which many recreational fishers feel took place behind closed doors. This was something the BOP Regional Council acknowledged in their announcement, noting, “This is a unique and complex case, established by the Environment Court” and “as a result, there has not been specific public consultation, as the proposed protection areas were not part of the Regional Coastal Environment Plan when the last scheduled review and public consultation took place in 2015.”

At the centre of this debate – and a number of the court proceedings – was the jurisdiction of the Resource Management Act (RMA). While fishing controls were previously understood to be solely governed by the Fisheries Act (FA), the Motiti protected areas are implemented under the RMA and enforced by the BOP Regional Council. This is unprecedented, and many local recreational fishermen see it as a massive loss.

For local resident and NZ Sport Fishing Council Board member Vance Fulton, “it is incredibly disappointing outcome for fishers in the BOP.”

“This is especially galling for the community as a whole, due to the total lack of community consultation/involvement throughout the whole Environment Court process – it was all done behind closed doors,” he says.

He also added that “this has primarily been brought about by 30 years of a failed Quota Management System which has lead the Environment Court into forcing the BOPRC to lock recreational fishers and the public as a whole out of these areas.”

To find out more information on this issue and to see the exact boundaries of the marine protection area, head to https://www.boprc.govt.nz/our-projects/motiti-protection-area.

The Orewa College year 10 project-based learning class spent a term working on the Love Your Coastline unit, which included how to fish sust... more > 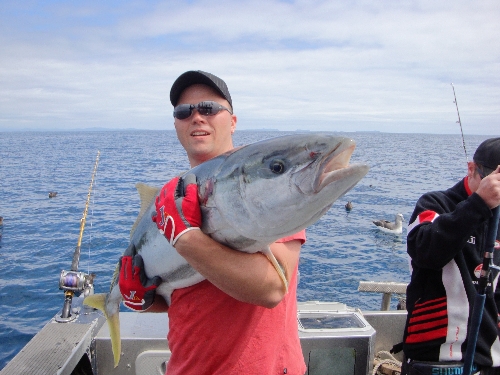