The annual NZ Sportfishing Council AGM is an opportunity for NZ recreational fishing’s leading body to reflect on the year that was, and make plans to continue to grow the sport and our stocks for the future. Deputy Editor Miah Dixon attended the 18/19 AGM at the Mana Cruising Club in Paremata, reporting the following...

President Bob Gutsell marked the 18/19 year as “satisfying but frustrating”. The satisfaction, he says, comes from the fine work being done by NZSFC across Fisheries Management and advocacy work, but the stagnant membership numbers in an area with such a huge recreational uptake is frustrating. 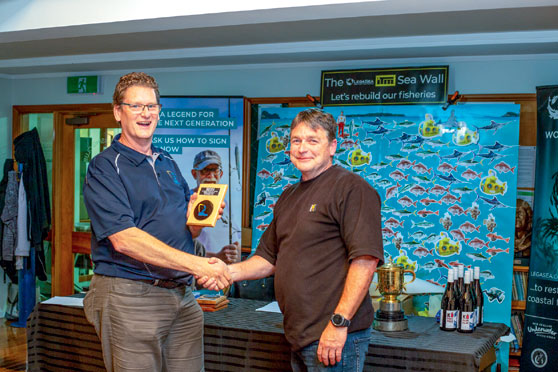 LegaSea continue to work hard advocating for better fisheries management for all New Zealanders, while also building other initiatives such as the Kai Ika project, which since 2016 has collected and distributed more than 45,000kg of fish parts via the Outboard Boating Club and Papatuanuku Kokiri Marae. As well as their ongoing Fish Care programme, LegaSea rolled out their Time Out for Tarakihi campaign in 2018/2019.

The NZSFC is still working to implement a CEO to act as the professional cornerstone of the organisation and create and implement new strategies to help the NZSFC grow.

Hiwi the Kiwi, the council’s long-standing youth programme, has now reached over 460,000 students through 1400 shows over 10 years. The council once again thanked ‘Mr and Mrs Minstrel’ who have been instrumental in the continued success of the Hiwi the Kiwi programme.

The annual NZ Sportfishing Council (NZSFC) AGM was attended by the Honourable Stuart Nash, the current Minister for Fisheries, who took the opportunity to acknowledge a number of timely topics currently being debated amongst fisheries. 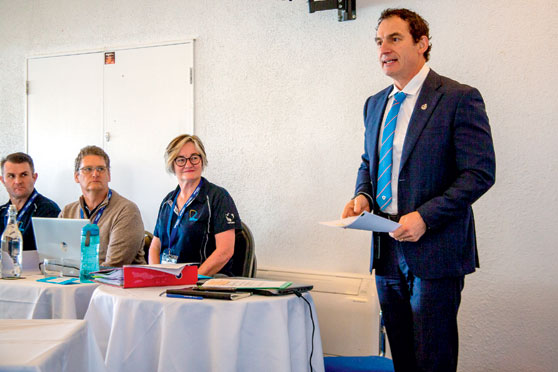 Nash received concerns presented by LegaSea and the NZSFC regarding the tarakihi stocks. In 2018, Minister Nash reduced the TACC (Total Allowable Commerical Catch) by 20%, giving commercial fishers the opportunity to present a plan to rebuild the stock. Prior to the release of the latest changes to the tarakihi stocks, the Minister expressed his lack of confidence in the commercial sector’s effort to build a solid plan – this was somewhat echoed in the decisions regarding TACC in October.

NZSFC delegates expressed frustration that, following the release of data from the Ministry of Primary Industry’s recent recreational catch survey, a lot of negatively geared press was released that painted recreational fishers in a poor light. While Minister Nash stood by the data, he expressed disappointment in the way the data was presented to the public via an MPI press release and as such, has asked all for all future press to be run past his office before being released to the public.

While only in their early stages, Minister Nash discussed potential plans for tourist ventures and recreational fishers having exclusive access to certain inshore areas. He acknowleged the huge opportunities available to New Zealanders through both fishing and other ocean-going tourism ventures, and the need to explore these further.

2018/2019 has been an exciting twelve months for LegaSea, with the introduction of a number of new initiatives.

LegaSea Lager hit the shelves pre-Christmas 2018 and presented the LegaSea message through a new medium. While many retailers have sold out of LegaSea Lager, those wishing to purchase the highly coveted last few boxes can find a list of retailers on the LegaSea website.

The Kai Ika project, spearheaded by LegaSea and introduced through the OBC and Westhaven Marina, has been a huge success, with more clubs looking to implement the programme and share valuable fish resource with their surrounding communities.

A purpose-built, portable Kai Ika filleting and refridgeration container has been fitted out and is currently being set up at the Mana Cruising Club in Paremata. Fish heads, frames and offal collected from the club will be donated to Seka Kai.

Thanks go to Royal Wolf, the Ministry for the Environment, the Bobby Stafford Bush Foundation, Special, Beca and The Working Together More Fund for their valued support on this project.

On the sponsorship front, Whitehaven, the makers of LegaSea’s own Koparepare wine, have continued their support for the cause, joining the ranks of LegaSea’s Platinum partners. The Koparepare range can be purchased online via a link on the LegaSea website.

John Holdsworth of Bluewater Marine Research, recently participated in a pre-assessment workshop with the Secretariat of the Pacific Communities, where he contributed a range of data collated from a range of NZ sources. This included ‘catch at weight’ data from NZ clubs, which was deemed some of the most valuable and influential data components.

With the recreational frenzy surrounding the southern bluefin tuna (SBT) run off our eastern coast, it has been established that there is a need to measure the recreational take to support the best management of this fishery.

There is currently an MPI project underway to estimate the amateur harvest, supported by a number of different research methods, from at-ramp surveys to anecdotal reports.

Catch data was collected from Waihau Bay across 57 days of the season this year – this will be combined with further catch data from NZSFC weighstations and charter knowledge.

This year’s survey recorded 118 SBT, of which 24 (20%) were unweighed. With a growing understanding of the importance of caring for tuna to preserve their prized meat, more and more fish are going straight to the fridge and bypassing the weighstation. Bluewater Marine Research requests that where possible, anglers measure and estimate the weight of their fish before dressing them to support their research.

From this year’s recreational harvest, 80 pairs of otoliths from the recorded 118 fish (68%) were collected – these are vital in assisting researchers determine the age of fish being caught off our coasts.

On a separate note, the behaviour of recreational boaties has been looked upon infavourably by other boaties and ocean-goers in the Eastern region during the peak of the SBT run. There have been multiple reports of unsociable behaviour and excessive alcohol consumption on board recreational vessels. Recreational boaties are reminded that the team at Waihau Bay do their very best every year to cater to the large number that descend on the small town. Coming prepared both with gear and a plan for launching and retrieving makes the process easier for everyone. It is also a timely reminder that alcohol should be consumed in moderation when boating, and that anti-social behaviour will not be tolerated by the club and its members.

To further assist Bluewater Marine Research with their studies, NZ anglers can:

• Join an NZSFC affiliated club – catch data from club weighstations is passed onto Bluewater Marine Research and plays a key role in their studies.

• Self-impose/introduce voluntary limits on unique species such as SBT – e.g. one fish per boat per day.

• Report and weigh any catch – regardless of whether it’s large or not, all data is valuable. Members of an NZSFCaffiliated club can request a courtesy weigh from another NZSFC-affiliated club if fishing away from your home base.

The BMR tagging programme is ongoing, with consistent recaptures being reported.

Every year, one angler who returns a completed tag card is drawn as the winner of $1000. The 2018/2019 winner is Leith Wietzel of Lower Hutt. Leith caught a 112cm kingfish at the Three Kings. Leith’s kingfish was recaptured 307 days later, having grown four centimetres and travelled one mile.

Following a recent self-evaluation, the IGFA have recognised a number of key areas in which they are looking to develop. There is a growing emphasis on engaging with youth, and as a result, the IGFA have launched a youth ‘Passport to Fishing’. This new programme can be rolled out both in classrooms and fishing clubs, either at on-water fishing days or as an indoor activity on its own.

The ‘Passport to Fishing’ is comprised of a number of stations which children move around, retrieving ‘stamps’ for their fishing passport as they learn about key aspects to fishing such as basic tackle, knots, conservation, casting, safety and environmental stewardship.

This pack will be circulated throughout different NZSFC clubs. If you’d like to see this pack in your community, contact Helen Pastor of the NZSFC. 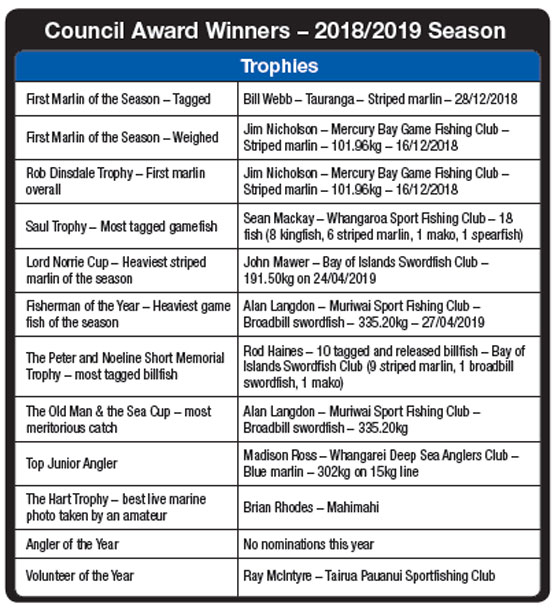 There are two new pre-prepared squid baits on the market that are truly magic.... more >

This season sees the availability of the standalone Penn Pursuit lll rod and reel range...... more >

Caught by the captain and crew aboard Lanakai, the 425kg beast is already being called 'the catch of the decade'...... more > 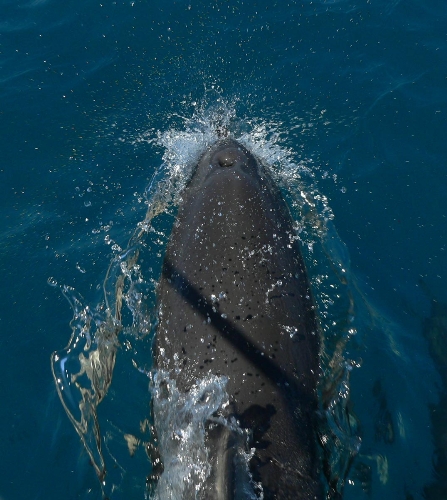