Keeping it in the family

The Scott family, who fish out of Whangaroa aboard their Riveria 43 Odyssey, are regularly among the record books and prizes with 10-year-old Lola the latest to land a fish of note.

Over the Easter school break Lola was fishing with grandma Christine and brother Hunter when she hooked her sixth marlin, which turned out to be a smallfry record of 133.1kg on 15kg tackle. Earlier in the break Lola landed a 15.4kg kingfish, a great effort and one made even more significant in that it was caught on three kilo tackle – a 5:1 ratio capture.

Her marlin was caught on a lure at around 9.15am just outside the 100 metre line off Flat Island and took her around 45 minutes to bring on board, fighting it from a chair. This was her second marlin encounter for the day. Earlier than morning she had hooked a nice stripey on 10kg tackle, playing it for 10 minutes before the hooks pulled.

It was a true family affair, with dad Adam at the helm, brother Hunter the deckie and grandmother Christine playing her part. While Lola’s fish at 133.1kg set a new New Zealand smallfry record, she still has a little bit of catching up to do on her brother. Several years ago Hunter landed a 133.4kg striped marlin on 10kg line and later nailed a 250.4kg black, so has set the bar high. 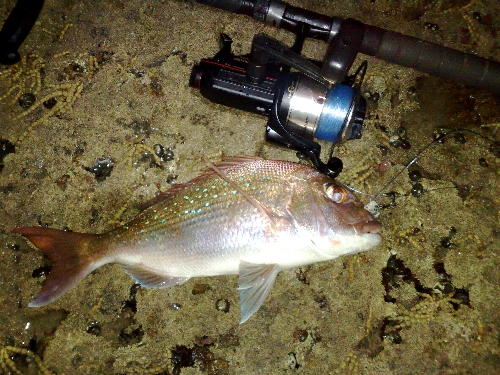