This is very different to the traditional night-time experience under a full moon well offshore. The day-drop method has a huge following further north among the recreational fleet, from trailerboats to launches. Swordfish rise at night, feeding on squid, but now it has been found that they can be taken during daylight hours, fishing the bottom around 500 metres deep.

It was a fine day on Thursday 29 August and the boat fished in ideal conditions. Charger skipper John Ballard, Matt “Snowy” Peters and Graeme McKay, the angler, used a skipjack tuna as bait and sent it down deep. Light sticks are often used to attract squid and fish, bringing swordfish in to eat the bait.

After some time a bite was felt which hooked up solidly on the 60kg tackle. You can imaging the crew’s surprise when after a mere 20 minute fight it was tuna, rather than a swordfish, that came to the trace. Southern bluefin tuna migrate off Gisborne in May, June and July, heading northwards. The monster was gaffed alongside to much jubilation. It was a big effort to bring the 156.85kg fish over the side and into the boat.

The fact the fish was caught with relative ease suggests the skipjack tuna down its throat may have restricted the fish from fighting to its full potential. Many tuna take several hours to bring in.

Back at the Gisborne Tatapouri Sports Fishing club the scales were dragged down to 156.85kg, a tad ahead of the current 60kg line class world record of 155.10kg caught last year at Waihau Bay by Phil Roycroft.

To qualify for the new world record, samples of line and terminal tackle are sent to the International Game Fishing Association to check that every aspect of the catch is done by the rules.

Because there is not much difference between the larger pacific bluefin tuna and southern bluefin tuna, sometimes a DNA test is done by NIWA for correct identification. 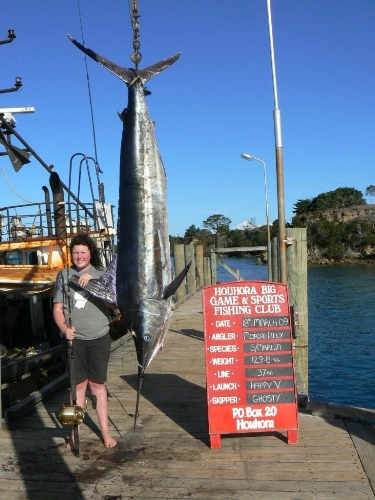 129.8kg Club record for a junior. - Out From Great Exhibition Bay