10 MAY 2021 — Firmans Marine has been a mainstay of the New Zealand boating scene for half a century.

The Firman family has helped thousands of customers over the years from the company’s Napier base on the North Island, building an enviable reputation for outstanding service, products and know-how.

It’s a success story that has endured many challenges. And, according to Brian Firman, it all started because someone saw a Mercury outboard in a window.

“The history of Firmans Marine can be traced back to my grandparents – Fred and Jean – who originally ran Caltex service stations until they added a caravan rental fleet,” Brian said.

“As the caravan business started to boom it soon became more attractive than the seven day a week service station. They saw the opportunity to leave the servos behind and put all their energies into caravans.

“In 1968 my dad Ray, who was also working in the family business, traded a caravan for a wooden launch called the VAGABOND. Going out on this little boat really started the Firman family’s love for fishing. 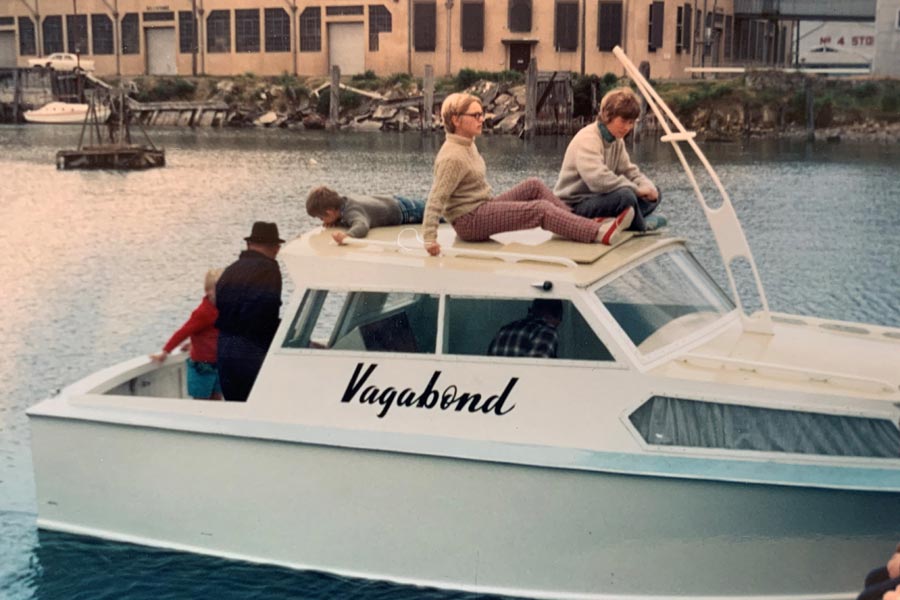 “Then, in 1971, another deal ended with Ray trading a 9.8hp Mercury outboard which he decided to display in the small showroom shop window.

“Completely coincidentally, David Reynolds – who was the marine division manager for Spedding Ltd – was driving past and noticed the displayed engine. He casually dropped in and asked us whether we’d like the exclusive contract to sell Mercury outboards!”

The proposal was readily agreed to by Ray, and almost immediately red band Mercury outboards were transferred to the Firmans shop. The business was then renamed, ‘Firmans Caravan and Marine Centre Ltd’.

By the mid-80s, Ray was ready to hand over the reins. Brian and brother Gary, who were both working in the oil industry out of Borneo and Africa respectively, returned home to take over. The caravan business was sold off and total focus was on marine equipment, new and used sales and workshop service.

The business name Firmans Marine Centre (1988) Ltd bears testament to the year in which Brian and Gary purchased the business. Over the years, they would be joined by fellow siblings Sandra and David making it a real family affair.

Brian has been the sole owner since 2000 and the business has continued growing from strength to strength. In 2008, another milestone decision was made to purchase Profile Boats and the operation has expanded to building boats and developing the Profile Boats brand name.

He’s seen huge changes across the years from those first red band engines.

“We’ve obviously moved a long way from those early two-stroke engines. Probably the biggest shift was in the late 90s when Mercury launched the direct-injection Optimax range because they immediately halved the fuel bill for most users.

The Firman/Mercury relationship has now clocked up 50 years and, according to Brian, it’s been a fundamental part of his success.

“Mercury has always been leaders in innovation and technology and they’ve always backed that up with outstanding support,” said Brian.

“The current Mercury product range is the best it has ever been.

“The guys at Mercury Marine have been fantastic across the whole journey. We’ve always had a really strong relationship with them.”

It’s a sentiment shared by Will Sangster, Mercury’s GM Asia-Pacific.

“A 50-year relationship is a fantastic milestone between two companies and the Mercury team will be continuing to work very hard, building on this relationship for many years to come,” he said.

“Brian and the team at Firmans Marine have a certain DNA to know what the boating customer wants and then support them through their boating life, through a high caliber of marine experience and a fantastic “can do” attitude within the staff.”

The 50-year celebratory champagne will have to wait for the Firmans, because the current environment means there’s too much to do.

“It’s the busiest I’ve ever seen it in my 36 years in the business,” Brian said.

“Covid-19 has brought on a different mindset for a lot of people. Driven by the lack of overseas travel and low interest rates, I think people are now more focused on friends and family and a ‘you only live once’ mentality.

“Demand for recreational boating is just huge at the moment, so we’re just trying to help as many customers as we can.”