Does an earthquake or tsunami affect fishing?

After today's 8.0 magnitude quake located at the Kermadec Islands, I was asked about the effect of seismic (earthquake) activity on fish, and in particular their feeding behaviour after a quake.

There is a great deal of information about seismic surveys - used in seabed oil and mineral exploration - but very little about how earthquakes, and resulting tsunamis, might affect the fishing.

Anecdotally, from a number of personal experiences and speaking with respected anglers Tony Orton and Sam Mossman, the fishing does seem to be affected by earthquakes and seismic activity.

Sam recalls one extended trip to White Island many years ago when the crew was enjoying some good fishing, but that the fishery 'closed down' following quite a large earthquake centred off nearby East Cape.

I too was on a Ranfurly Banks trip in the early 2000s when we heard on the radio there had been a decent shake in the region. The skipper said 'that will be the end of the fishing for the next few days, a comment we heard repeated over the VHF among the other skippers in the vicinity. they were right.

On a trip to the Banks Islands, the furtherest northern group that makes up Vanuatu which is a region known for its seismic activity, a volcano erupted and there was considerable subterranean activity throughout the region. What had been a hot bite the first few days completely shut down for the remainder of the trip - and that was for both bottom species and billfish. it was as though someone had thrown a switch it was that well defined between good and bad bites. Our skippers at the time said the change was not unexpected and that the locals rarely fished immediately after a shake.

Tony Orton, who has fished extensively in Central America, says it was well known among the captains that the billfishery closed down after seismic activity was recorded. He experienced this a number of times himself.

What I did find via Google was the following that might offer some explanation as to why fish may be affected by seismic activity...

Recent animal sensory literature has been analyzed to evaluate the plausibility of reports of unusual animal behavior prior to earthquakes. Some species of fish possess remarkable sensitivity to pressure waves with frequencies below 50 Hz, which would enable them to sense earthquakes at least 1 to 3 Richter Magnitudes smaller than those detectable by human beings. Fish also have organs which can detect slight movements of water, although the available experimental data do not allow us to determine quantitatively whether they are sensing accelerations of water or variations in water displacement. Thus observations of unusual behavior of fish before earthquakes may be explained if the fish are responding to small foreshocks.

So there you have it, if the anecdotal evidence is anything to go by, stay home and mow the lawns this weekend.

If you do go out for a fish, we would love to hear how you got on and similarly, what have been your experiences of the fishing after an earthquake? 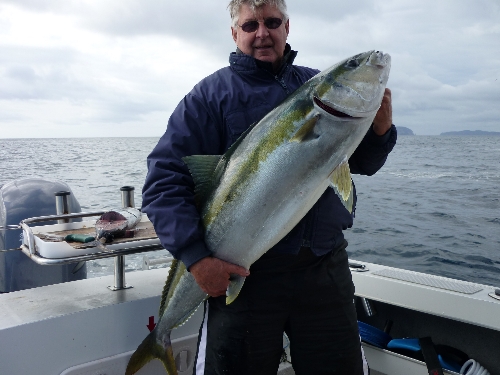