When the country dropped from Alert Level-3 to level 2 on Thursday, there would have been few happier than Auckland’s David Richards.

In late March he was announced as the winner of Hunting and Fishing NZ’s boat promotion, but was unable to even view his prize, let alone launch it, due to the lockdown.

David purchased a considerable amount of tackle in the New Year from Hunting and Fishing Albany’s store, putting him in the draw for the Extreme 545 Centre Console.

“When I received the phone call, I thought it was just some prankster playing an early April Fools’ joke,” David says. “It was not until I saw it on Facebook and then the website that it finally sank in, I had genuinely won a new boat.”

Until now David’s fishing had been confined to a jetski, from which, he says, he learned a lot about the Hauraki Gulf.

“It was an apprenticeship and I loved it, but what I am most looking forward to is taking out a mate or two.”

David says the jetski was good for prospecting and that he had had his ‘moments’ on board, like the time he lost a $2000 rod and reel combo, pulled out of his hands by a kingfish. He has also broken a couple of rods, going a little too fast in rough conditions. With the jetski replaced by the Extreme, David is looking forward to the added comfort.

“I had taken the jetski in for a service and after hearing the news, told them to sell it on my behalf.”

A dentist who has recently established his own practice, David says the extra money will come in handy, given the COVID-19 scenario.

“But best of all, I will no longer need to fish solo.” No doubt he will have little trouble filling the crew positions!

David is the second jetski angler to win a new Extreme boat this summer. Karitane’s Toni Parata won the Shimano Last Man Standing draw and is now the proud owner of an Extreme 605 Sportfisher. 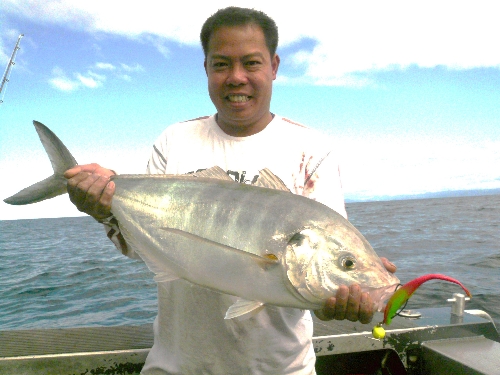