It was with a little scepticism that Whitianga’s Jason Riedinger took the call from NZ Fishing News editor Grant Dixon, telling him he was the winner of the Ultimate Marine Makeover promotion run in the magazine over the last couple of months.

Jason was on site pouring concrete when the call came through, telling him his boat would be getting the refurbishment treatment after his good friend in Whakatane, John Stables, sent through the nomination without him knowing.

Jason’s boat, a Mclay 5.5 called Nibbler, will be getting the full pimped out treatment with a new four-stroke outboard from Suzuki Marine NZ, a trailer refurbishment from Voyager Trailers Ltd, a Humminbird Australia & New Zealand sounder, JBL sound system and Ocean underwater lighting from BLA, a Cannon downrigger and SavWinch capstan and suitable chandlery from Absolute Marine; Hutchwilco safety gear, new Century Batteries NZ Marine Pro batteries, decking from U-DEK by Ultralon NZ/AU and signwriting from Brave Design. Catch Fishing will provide a selection of new tackle and the whole project will be pulled together by Phil Birss Marine, Hamilton’s Suzuki dealer. Journey of a Fisherman - Offshore Adventures will be recording the process for posterity.

NZ Fishing News congratulates Jason and his family on their win and thanks the several hundred readers who took the time out to enter.

“It proved a difficult call with so many worthy recipients, but in the end we could only chose one and we look forward to working with Suzuki, Phil Birss and all the contributors to give Jason’s boat the Ultimate Marine Makeover,” Grant says. 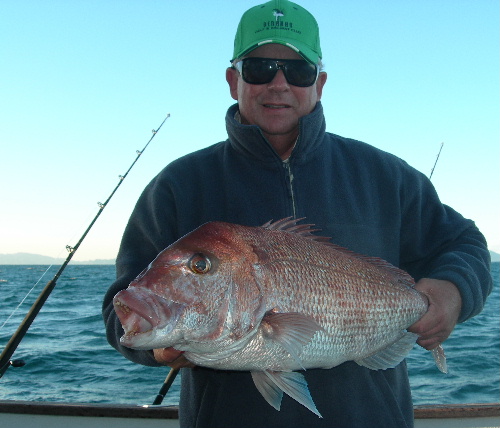 Pat with a nice SP snapper off DIVERSITY - Hauraki Gulf