Battling a billfish on a kayak

If there is a prize for doing the hard yards, or one for tenacity, this gamefishing season, a dead cert for the award is West Auckland kayak angler Greg Potter.

Greg has for some time harboured an ambition to catch a marlin from his Viking Profish 440 Kia Kotahi and had tried off Cape Karikari, where he found that far from being bored, he enjoyed the experience despite the frustrations of having his livebaits dealt to by sharks.

Doing his research, he saw that the deep water (150-200m) was within reach of a determined paddler off Cape Runaway, based out of Waihau Bay.

With time off from his day job as a lawyer arranged and armed with a new set of tackle – a Shimano Speedmaster 16, spooled with a top shot of 24kg mono over braid backing, matched to Shakespeare Bluewater 24kg rated Ugly Stick – Greg waited for the right weather window and headed to the eastern Bay of Plenty.

The first morning Greg saw that the conditions were a bit lumpy so spent the day inshore chasing snapper, hapuku, and kingfish.

Waking on Day Two to mint conditions, our intrepid angler quickly caught a kahawai which he bridle- rigged before towing it out to the blue water in 150m, some 6-7nm off Cape Runaway.

He fished in the region for 4-5 hours, before changing direction and paddled quietly for a similar period in perfect conditions.

At around 4.30pm he hooked up, his adversary unseen. The fish headed straight out to sea as he called his hook-up in.

“The reaction from 4-5 boats in the area offered encouragement, but they thought I was crazy,” Greg says. Mike Fenton was in the vicinity aboard Witchcraft and he stayed close by to keep an eye on the ‘crazy kayaker’.

The fish stayed doggedly down, staying at that depth for considerable periods of time. Greg understood it would start getting dark from around 7.00pm onwards and he finally got the leader onto the reel for the first time at around 2hr 40m, only to see it disappear again. This happened three times in the next shore while, Greg unable to either see the fish in the gathering gloom or to raise it to the point he could grab the short trace at the end of the wind-on. 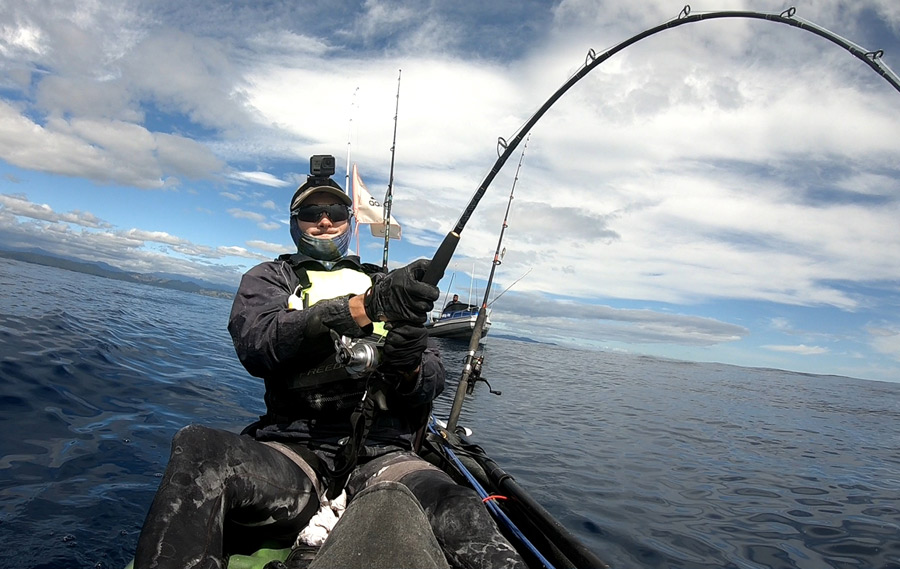 He and Mike had a discussion and with darkness approaching, Greg took up the offer to jump ship and attempt to finish the fight from Witchcraft. With about 30 metres to go, the line went slack, and Greg was sure he had lost the fish – some rapid turns saw him come up tight and he got the leader onto the reel yet again. The fish made a final dive and this time it won its freedom, the line parting.

Greg had mixed emotions – he was both gutted at losing the fish unseen, but elated that he had got so close. It had been a big day, being on the water for 14 hours, paddling close to 50km and fighting the fish for just on three hours. And the fish? Possibly a blue marlin, or perhaps a big tuna? It will always be one of life’s angling mysteries for Greg.

With blistered hands and aching muscles, Greg was dropped ashore by Mike and as he headed for his bed, thinking twice about attempting to do it all over again the next day.

When the morning dawned still and calm, Greg found he was ‘super-motivated’ to give it another shot. The day before his neighbour in the camp had landed a blue, and that was the clincher.

Back on the water Greg caught another kahawai off the cape which was rigged, and he began the slow troll seawards. Some 20nm later he had seen some skipjack on the surface, but very little else.

The first indication that the kahawai was being given some serious attention was when Greg heard the ratchet click a couple of times, then it slowly sped up, finishing in a crescendo of screaming reel. Greg was hooked up, this time the aerobatics of the fish left no doubt as to what it was – a billfish!

Calling the hook-up, Greg had to take evasive action as the fish charged headlong back at his small craft – a collision would have spelled disaster. Just before the potential impact the marlin saw the kayak, turned 180 degrees and ‘went nuts’.

“At one point it was directly under the kayak, all lit up, it was insane and definitely not under any sort of control.”

Once some sort of order had been established and after a couple of runs over the next hour Greg got the leader onto the reel five times, and despite getting wraps on it but once again, couldn’t quite get the short lure trace to hand.

By now the wind was starting to get up and was blowing 15knots, chopping up the sea. Greg had been shadowed by Elwood Higgins and his crew aboard Billy Boy, who had offered to take Greg aboard to complete the fight.

“I refused their kind offer but appreciated their assistance. I was determined to make this an unassisted capture.”

Soon after Greg did get that wrap on the lure leader and had the fish subdued alongside the kayak. Only then did Elwood step in, gaffing the fish to secure the capture.

“Game over, I had done it, I couldn’t stop screaming in elation.”

Greg had hooked up in around 130m of water and when the fish was caught, he was in close to 200m. He had been towed 5-6km over the two hours 40m it took to land the striped marlin.

Elwood helped Greg get a few photos of the fish draped over the kayak before pulling it, the kayak, and the paddler on board, dropping them back at the departure point.

“Elwood, a local, was amazing. He took control, arranging a courtesy weight at the club and then helped fillet the fish which was mostly smoked when I got back to Auckland, loaning me an insulated bag to get it there in top condition.”

The striped marlin weighed 94.2kg on the Waihau Bay club’s scales. The fish was measured, and all the tackle checked, ensuring it complied with IFGA rules.

Small craft, big fish. Greg with his striped marlin back on shore. 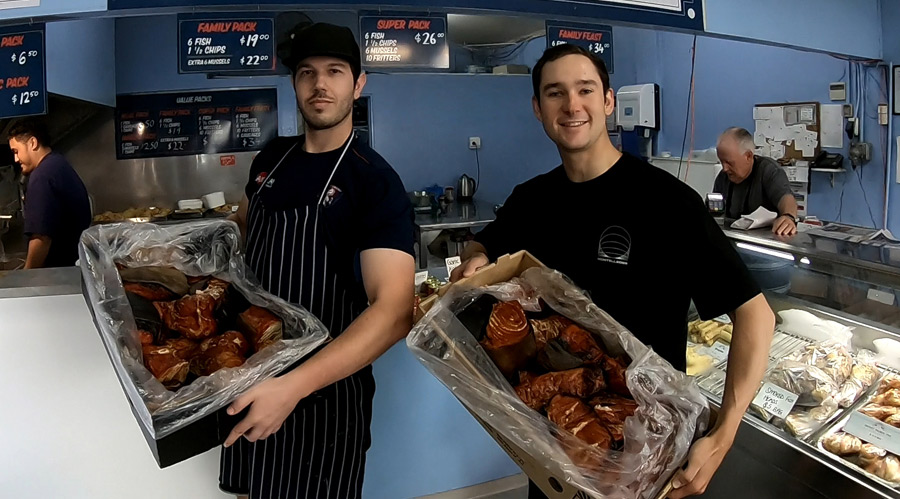 A tasty reward. Greg has his fish smoked to be shared among family and friends.

“I was a bit lucky there as I had initially spooled up using an over-length wind-on leader as I was not interested in chasing a record, I just wanted to catch a fish. Luckily for me, the reel was overfilled so I chopped some of the wind-on off, bringing it by chance to within the IGFA parameters.”

Although this is the third New Zealand striped marlin caught from a kayak, it is the first to be weighed Greg thinks.

Noted Northland kayak fisher Kerry Flowers was the first to do it in 2015, getting the leader in hand – a caught fish under IGFA rules – before subsequently losing it. The ITM Fishing Show host Matt Watson was the second, catching one off a kayak at Waihau Bay which was tagged and released, leaving Greg’s the first one to be landed.

Well after the fish was smoked and the story shared, Greg was still feeling the after-effects of the two battles. The blisters had healed but for some time his index fingers and hands were numb, and then there were the aching muscles – all reminders of what he had achieved.

‘I need to thank those involved – skippers Mike and Elwood, the Waihau Bay club members and weighmaster – you we all fantastic, I appreciate very much you help in achieving my goal.”

So, what is the next challenge Greg?

“I am thinking there might be one or two more opportunities left this season and certainly a shot at a southern bluefin this winter is at the back of my mind.” 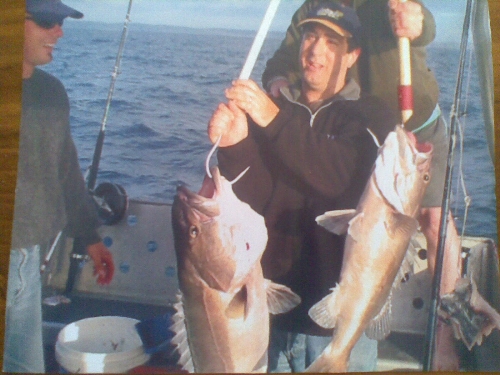 2 fish at once my best catch to date - kaka point