Contributor and travel writer Steve Dickinson has done his fair share of game fishing from smaller boats. There is a particular joy of not being strapped into a chair but balancing on a shifting deck, where the only thing holding you up is the weight of the fish on the rod…

As we trolled along in Niue’s early morning light, the lures not in the water more than five minutes, one of the rods buckled over, then another. Still no gimbal belt on (rooky mistake), I struggled to get snapped in place while BJ (the skipper) pulled the rod out of the holder and handed it to me. Instantly I knew it was a good fish; “Oh shit,” I heard myself saying as it started to pull me towards the back of the boat. I stood my ground and heaved high on the rod, nothing – it was like I was locked on to Niue itself. I tried to turn the handle, nothing; it was rock solid. I looked to BJ, “Mate, is this drag set right?” 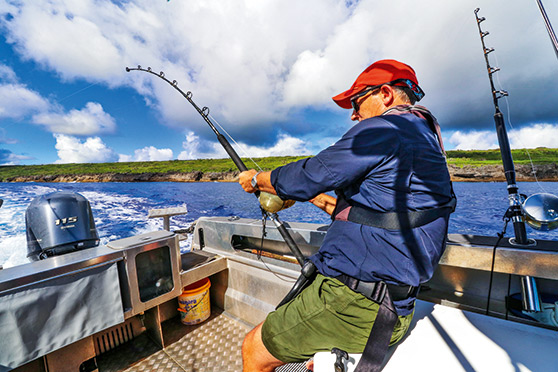 Balancing on a shifting deck, where the only thing holding you up is the weight of the fish on the rod.

It was still solid. I thought, “right, it’s all about technique.” I’ve landed solid marlin, and they were not this heavy. Rod down, wind up. The rod went down, but there was no wind-up; just solid weight and me slowly slipping towards the stern of the boat on the wet deck. With one massive effort I pulled back on the rod and got some movement. There was a mighty thrash on the line, and then I started to make some gain. I ground away at the reel – rod down, wind up – and now the fish was coming quickly, eventually making it to the side of the boat. BJ looked at me, laughed and gaffed up the head of a… skippy.

“Skippy head,” announced BJ and flicked this monster into the fish bin. A skippy? Not unless it was out of Jurassic Park! This was the biggest skippy I had ever seen, and it was just the head! In Niue, evidently, they grow huge – up to and over 20kgs. The rest of this one was shared with an even bigger predator lurking in the dark deep blue depths – key Jaws music!

For many years Niue was promoted as ‘The Rock’ and to be honest, it did Niue some injustice. A rock is a hard place, it’s unforgiving, it’s solid, dull, lacking in soul and it’s cold. Niue is none of those things. Niue is warm and inviting, it’s lush and clean, it’s bright and sunny, and its people are warm and friendly. From the moment you arrive, you have this tremendous feeling of being welcomed by the locals – from the smiling customs officer to those walking down the road who wave to everyone they see.

This was not so much the case in 1774 when the first Europeans sighted Niue sailing with Captain Cook. Cook made three attempts to land, but the inhabitants fought them off each time. He named the island “Savage Island” because, as legend has it, the natives who “greeted” him were painted in what appeared to be blood. The substance on their teeth was, in fact, hulahula, a native red fe’i banana. For the next couple of centuries, it was known as Savage Island, but it’s now known as Niue, its original name which translates as “behold the coconut”.

Niue is one of the world’s largest raised coral atolls. There are steep limestone cliffs along the coast with a central plateau rising to about 60 metres above sea level. The classic feature of Niue is the number of limestone caves and chasms along the coast. These limestone chasms are clearly signposted for tourists; your only issue is tide. In our room at the Scenic Matavai Resort, we had a tide chart which related to each of the chasms and suggested the best times to go. You will want to visit them – they are stunning, with crystal clear water against the backdrop of grey limestone. But don’t go barefoot – wear reef shoes. We stayed all week at the Scenic Matavai Resort, the only resort on the island, and it was spectacular. Not many resorts can you sit in the bar and watch whales swim by! 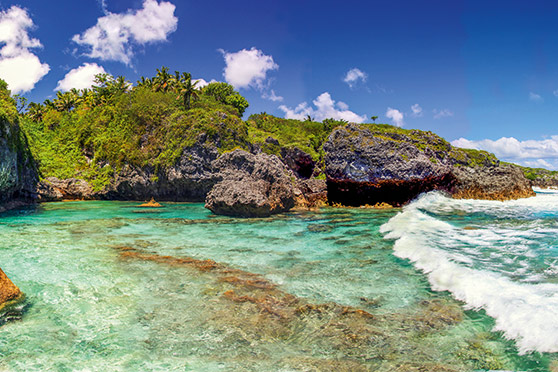 The chasms are stunning, with crystal-clear water against the backdrop of grey limestone. 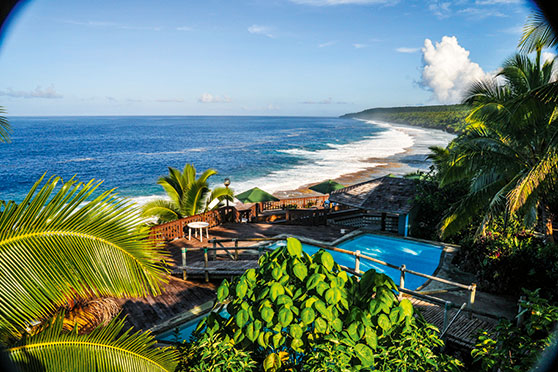 There are not many other places you can sit at the bar and watch the whales swim by.

There are a few fishing charters on Niue. We went out with Fish Niue Charters, on their boat Manu Tahi (Seabird), which is a 6.3m Stabicraft. When you have done your fair share of charter boat fishing you get a pretty good feel within the first few minutes of being on board how the day will go. The first thing you notice is the boat being craned into the water (all boats in Niue are taken out overnight as there is no ‘safe’ harbour) and this tricky process was done effortlessly. The second thing you notice is how good the gear is. On this charter, there was not a rod or reel that didn’t look brand new. Throughout the day we chatted with BJ, the skipper and owner, and he told us how it was a priority for him to give clients the best experience possible, and part of that was providing the right gear for the job in good condition.

Within five minutes, possibly less, we had lines in the water. The sea around Niue gets very deep, very quick with the local FADs (Fish Aggregation Device) sitting over 1200 feet of water (that’s a lot of rope!).

We used a variety of lures and rigged flying fish, and there were six rods out, some spread using outriggers. What I did note was that the outrigger lures were a lot further back than where we would typically have them in New Zealand, possibly around 75m, and the towing speed was slightly faster at about nine knots.

The drop-off is phenomenal and you would think deep water is deep water, but no – BJ was particular about the trolling lines we took as we cruised around the island. Within ten minutes we were fishing, and in the five hours we fished that day, we pulled in 15 fish. We threw back two smaller barracuda and as these fish are edible in Niue, we kept two as well. The haul also included the head of a skippie as I have mentioned already, two good size yellowfin tuna and a range of wahoo.

Wahoo are an extremely vicious fish. With a scissor-like mouth almost like a beak, you want to make sure you stay away from the sharp end. Repeatedly, we pulled in lures with their skirts complete cut off like they had been chopped with scissors. Wahoo are super fun fish to catch. They erupt on a lure and then give a great fight. They fight hard right up until they’re in the back of the boat and even there they are still a menace. We were impressed that 15 fish were caught in five hours. 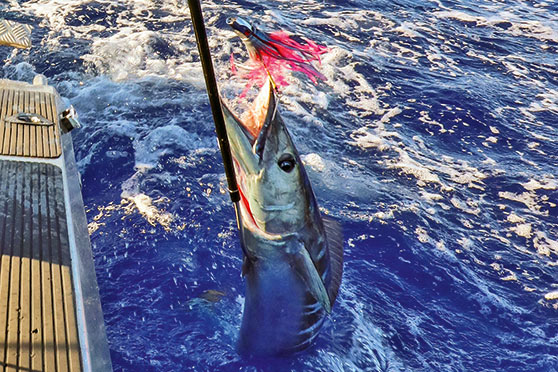 Wahoo are fun fish to catch. They erupt on a lure and then give a great fight.

BJ said modestly, “it’s not always this good,” but I think it is!

Fish are in short supply on Niue Island itself (not enough people fish), and the catch belongs to the boat. But a nice touch is BJ also owns a restaurant called Falala Fa, and if you have had success, they will serve you up your fish as an entrée of tempura and sashimi. It’s the best sashimi I have ever tasted and to top it off, there is no charge!

All in all, Niue has a huge amount to offer. It’s unique, stunningly beautiful, there’s loads of things to do and the fishing is off the scale!