To be perfectly honest, when first invited to fish in Niue, I didn’t let my expectations get too high. After all, I’ve fished most of the Pacific’s tropical islands with variable results. Also, same as here in New Zealand, the fishing potential isn’t just down to having an abundance of fish, it’s determined by the time of year, the weather, water temperature and tides, as well as fishing pressure from local and international fishermen. I wondered how these factors might affect a small island nation like Niue – especially as I was on quite a tight schedule!

It turned out there was no need to worry. Not only was I impressed by much of what I saw and experienced with several of the island’s better-known charter operators, the fishing potential here is unbelievable. I can’t remember the last time I enjoyed so many multiple strikes from yellowfin and wahoo – what a blast! 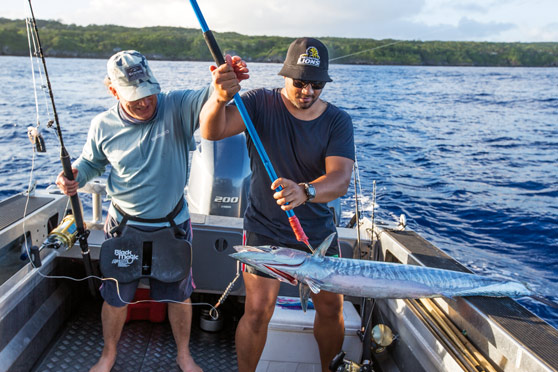 As a super-keen angler, I’m used to long days on the water when fishing overseas – often dawn till dusk – so had to get my head around doing charters just five hours long. Besides, there are good reasons for this, as I discovered.

It turns out plenty can happen when fishing is timed to incorporate the productive change-of-light periods, especially as deep, purple-blue oceanic water is just two-hundred metres from the boat ramp. Consequently, anglers can enjoy the most exciting fishing time (we were finished by 10 or 11 each morning!), then spend the rest of the day relaxing by a pool, swimming, diving, biking or looking around this charming island. Or you can head out on another fishing charter for the afternoon session! The first part of my stay in Niue wasn’t ideal. An unfortunate combination of a rough day followed by the island’s boatlaunching crane breaking down resulted in a couple of early charter cancellations. However, I’m pleased to report that this early disappointment was more than made up for by the trips that followed!

Some of the charter-fishing options…

One of the early charter-fishing casualties was James Douglas, which is a shame as several people said he’s a great fisherman and a good bloke. So I met up with him for breakfast and a chat, and very quickly realised his supporters were right: I’d missed a wonderful opportunity for a strong start to my Niue charter-fishing feature.

But James certainly didn’t start off fishing in such luxury. Like most other Niue Islanders, he learned the ropes fishing off the reefs, before graduating to a vaka, a very basic but surprisingly effective wooden canoe fitted with a stabilising outrigger. The vaka provided James with many valuable skills and experiences.

Small tinnies came next, powered by the famously fickle Seagull outboard, though James said that there was actually very little that could go drastically wrong with this simple little motor.

After that, his vessels continued to grow in size while his passion for fishing remained as strong as ever, prompting him to start charter-boat fishing seven years ago.

Trolling lures and rigged flying fish for an assortment of powerful predators around Niue remains James’ go-to technique, but he welcomes the opportunity for jigging or casting stick-baits and poppers if that’s what the anglers on board want to do.

James also has a very good success rate, particularly with wahoo and tuna, rarely coming back with nothing. But even if the action is slow, you’ll be well entertained by an assortment of fascinating, funny and enthralling tales, as I found out: James’ primary aim is to provide his customers with a positive experience.

Women anglers have provided several of the more memorable highlights for James. Overall, he says, they have shown greater courage and determination, carrying on when their male counterparts have given up.

One example concerned two rather homely women in their fifties, who chartered him on a rather lumpy day. Not only did they never once complain about the rough conditions, they went on to catch several nice wahoo to 22kg, completely unassisted, to everyone’s great satisfaction.

Then, as we were wrapping things up, James casually mentioned he was the reigning Wahoo Champion Skipper – that’s a worthwhile title to have and a fantastic recommendation in itself.

My third day in Niue signalled a turn for the better, with charter skipper Brendon Pasisi arranging to meet me with my gear down at the main boat wharf at 5am.

Such an early start might scare some people, but I was stoked: those three or four hours just before and after dawn often provide the best fishing of the day.

Launching Brendon’s impressive (and still gleaming) Stabicraft 2400 Supercab from the illuminated wharf was particularly memorable. Thanks to the island’s mostly steep, rocky coastline, a crane is used to lower and retrieve all the reasonably big boats.

So, after loading my gear aboard the still-trailered vessel, I simply clambered in with it. Next, a large mobile crane (the wharf’s official boat-launching crane was still out of action) hooked up the boat’s strategically-located straps and literally swung into action, slowly lowering us down into the still, dark waters.

Then, after tidying things up and completing a safety briefing, we splashed off into the starry, pre-dawn blackness. Our destination – one of the several FADs placed around the island – was only about 20 minutes away.

Upon reaching it, conditions were still pretty dark, but we could dimly see dozens of wheeling seabirds, along with a lone vaka fisherman in the process of swinging a dimly gleaming yellowfin into the boat. It was all on!

Unsurprisingly, one of our outfits started unloading line a few seconds later – I’d hooked my first Niuean tuna after just a five minutes of trolling!

It didn’t take long to land the rather modest-sized yellowfin, so hopes were high for additional success. However, despite large numbers of tuna taunting us by jumping and crashing around the boat for another 20 minutes, we couldn’t get another bite. Even jigging proved futile.

We missed a bite almost right away, then had to wait half an hour for our next chance, a solid ‘thwack’ from the outriggers signalling something had taken off with the flying fish bait, reinforced soon after by a screaming reel.

And scream it really did! I’d forgotten just how fast these rocket-ship wahoo go, the spool a blur as line disappeared off into the indigo-blue depths. Then, as it eventually slowed and I started feeling hopeful, the weight suddenly came off the rod tip. Nooo!

Trying to stay positive, I wound frantically, just in case the wahoo was racing towards me. And, sure enough, it was, the rod steadily loading up once more.

Five more minutes of steady pumping and winding, interspersed by occasional bursting runs from the fish, led to a nice wahoo coming into view, its fluorescent blue markings showing up starkly against the darkness of its long, slim form. A few more cranks and it was up on the surface, where deckie Dan sunk the gaff into a 16 kilo specimen. The pressure was off.

Our next destination was another FAD, and this had school yellowfin busting up around it, too – what a pity they didn’t like our lure selection!

Brendon suggested casting a small stick-bait instead, a great idea, so I grabbed my Daiwa Saltist 24kg casting outfit rigged with a Rapala X-Rap SubWalk. Surely that would be ideal!

Excitedly I whipped the lure out towards the accompanying birds, allowed it to sink for a while, then started imparting various actions to see which movement did the trick...

Nothing first cast, and nothing the following cast, either.

After five casts my confidence had been badly dented and I was now simply winding the Rapala back at a modest speed to create a nicely rolling, weaving action – something I knew from previous experience tuna liked.

The lure was almost back to the boat when a tuna rocketed up to smash it just below the surface in a flash of foam, setting the reel howling soon after – for a short while, anyway!

Weighing around eight or nine kilos, it was significantly smaller than the 30kg-plus specimen I really wanted, but it gave a decent account of itself and I was still more than happy – my first yellowfin on a stick-bait.

It was a great way to finish my thoroughly enjoyable charter with Brendon aboard his lovely, well-equipped boat.

As a person and skipper, Brendon has many worthwhile qualities, being laid back, friendly, professional, and possessing a wealth of knowledge that he’s happy to share. Better still, he’s very receptive to trying new things – especially if his strategies aren’t working!

For more information and bookings, contact Brendon at [email protected]

I also enjoyed an afternoon fishing with Des and his buddy Richard on board his sturdy-looking six-metre Stabicraft, powered by a 115hp Yamaha four-stroke outboard.

Des comes from a family of very keen fishermen, and although their combined experience often provided a welcome helping hand over the years, he irritated some family members by forging his own fishing path at times.

Today Des is a very capable but easy-going fisherman who knows his own mind and possesses many good qualities. For example, although philosophical when the fishing’s slow, he manages to remain upbeat and good company, continually chopping and changing lures and locations in an effort to achieve success.

Also, rather than relying on fancy gear, he uses gut instinct and his extensive experience to select the right strategy, the right place and the right time.

I appreciated the fact he wasn’t precious about me helping out on deck, too. In fact, Des says he encourages his punters to have a hands-on experience.

Unfortunately for Des, it turned out the better bites were occurring in the mornings, limiting our fishing action. However, we still caught a nice wahoo and Richard contributed by landing a lovely coronation trout on bait. We also had a short jigging session, encouraged by Des, as he’s a keen exponent himself, but no luck this time.

To contact Des for information and bookings, email [email protected]

Or try this one…

Ian Richardson has a 5.5m Surtees Workmate that’s registered and complies with all the safety standards required by Niue Government Division Department of Forestry & Fisheries. There is seating for a couple of people and it’s powered by a Yamaha F100 four-stroke outboard.

Ian specialises in fishing charters for one or two people, with all gear and bait included. Although Ian mainly trolls for pelagic species such as wahoo, tuna, mahimahi etc, other fishing options – such as jigging and lure casting – are possible by arrangement.