The brain-child of Australian property developer Lang Walker, Kokomo Private Island is the newest addition to Fiji’s ultra-luxury resort scene. They offer a range of holiday opportunities for their guests, one of which is some great fishing opportunities just a few minutes away.

My trip to Kokomo started with a private flight into the island on the resorts Twin-Otter seaplane – what followed couldn’t have been scripted better if we’d tried, with the plane landing in front of the sun-drenched resort, with a group of manta rays performing loop-de-loops out off the beach. These guys really knew how to put on a show! 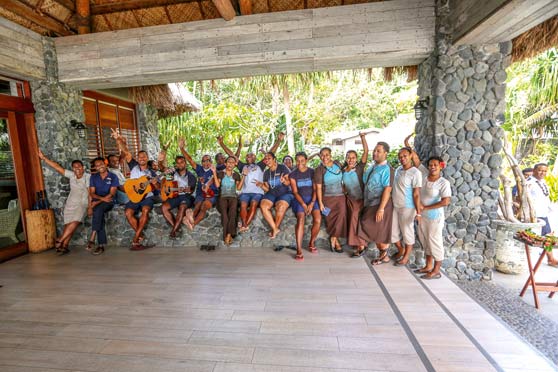 Having already chatted with fishing guide, Jaga Crossingham, the day prior, I was already raring to go. What lay ahead of us was the chance to tangle with a number of new species that I’d yet to lay my eyes on, let alone catch. To land all of them was going to be no small feat, but the team were sure that we could at the very least have a crack at them all.  Jaga has been fishing the waters around Fiji for more than 15 years, previously running his own operation, so I was sure he and the crew would put us onto some fish together with co-captain Harry.

After a quick recce of the resort, acquainting myself to my villa and introductions with the island’s key staff, we were off on the water to chase our first species – wahoo and Spanish mackerel. 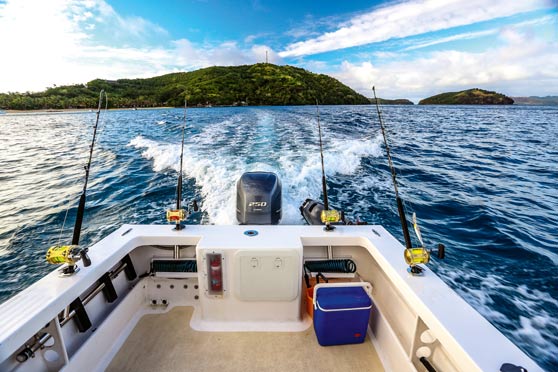 Kokomo boasts three well-appointed fishing boats that cater for everything from the hard-core fisho to the family that wants to enjoy a comfortable day exploring the surrounding waters. While the prospect of fishing off largest vessel in their fleet (a customised Riviera 4000 Express) made me drool a little bit, I was in need of something a little more nimble. The smallest (although still a respectable 28ft/8.5m) of the boats, a locally built centre console was to be our toy for the duration of my trip. It’s set up was ideal for the mixture of game fishing and casting on the reefs. Equipped with top of the range Garmin and Shimano gear, this boat was the perfect day tripping vessel.

It didn’t take long to steam to one of the channels that run between the reefs – an area where Jaga assured me all manner of beasts including wahoo, Spanish mackerel, dogtooth tuna and occasionally, sailfish, would haunt. All four of these species were yet to be crossed off my list, so it didn’t matter what bit our baits, I knew I would be in for something good!

Jaga rigged up some “busa” – a local species of garfish, tied on wire traces with lumo skirting on the nose. Most of the fishing was done by trolling around and through the reef channels. Our mixture of busa and scad (another local baitfish) were trolled either on the surface or on a “reef bomb” style downrigger set up, to get the baits right in front of the beasts that were lurking a bit further down.

We’d not long set our gear and the adrenaline-inducing sound of a reel ratchet going off sprung me into action. After 15 minutes of to-ing and fro-ing with my adversary, up popped a silvery sliver of a fish – my first wahoo! And not only was it my first Fijian catch, it was also going to make one of my first Fijian meals too – I was chuffed! I was also pretty sore, deciding that the decision to neglect the gym for a few weeks prior definitely wasn’t a smart decision. One more wahoo made it to the boat for our afternoon on the water before we steamed back to the resort with the sun slowly setting around us.

This short adventure was to set the precedent for my stay at Kokomo – half or full day’s fishing, the rest of the day either snorkelling, diving or touring the island, and the last few hours savouring whatever the chefs could think up to utilise our catch. 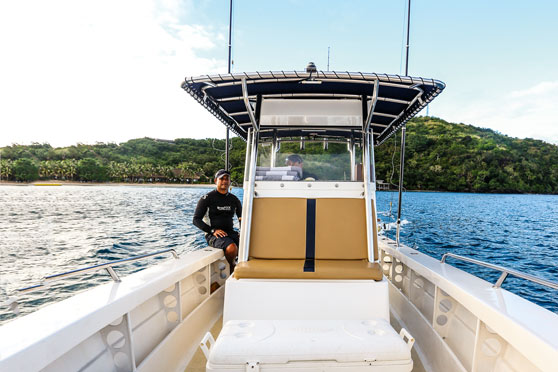 Our second day on the water kicked off nice and early – but while the sunshine was definitely there to play ball, the wind wasn’t, gusting a solid 15 knots and then some. We pushed on out to the reef, where our challenge for the day was to knock on the door of some of the resident Spanish mackerel, and down a bit deeper, dogtooth tuna.

Again, it didn’t take long to get us hooked up to something and this time whatever was on the other end really had some legs! It felt like a heavy weight that just wouldn’t budge, but when it decided to go for a run, boy did it go – Jaga and Harry were pinning their hopes on it being a doggie, and so I was too! I was harnessed up, slowly working the rod, but making little headway. We toiled back and forth like this for twenty-five minutes – realistically, not that long, but for me it felt like a lifetime! A few moments short of putting the reel into granny gear, we saw some splashing on the surface behind the boat – our “dogtooth tuna” was nothing but a foul hooked reef shark! I think the team back at the resort probably could have heard our cries of exasperation as we set about getting the shark to the boat to be released. Nevertheless, we dropped the baits back down and by the end of the day we returned with another mixed bag – wahoo, Spanish mackerel and a small yellowfin tuna, which was destined for the table.

All the variety on offer aside, my ultimate goal for the trip was to tangle with a giant trevally – a common reef-dwelling species in the Pacific with power to boot. Whilst I’d played the odd good kingie in my time, none of that would prepare me for the fight with my tropical reef dwelling opponent.

I picked up the lighter set up over the heavier one, to try and keep myself from tiring too quickly as I’d seen the fatigue from watching others. Whilst I’ve grown up fishing all my life, this was going to be the first time I’d ever cast a popper – surely it can’t be too much different from a soft-plastic, I hoped…

We moseyed over to a patch of rocky knolls not far from the reef - the water was so clear, you could probably see your adversaries on a glassy day, taking the idea of “sight fishing” to another level! I leant back and threw all I could into my first cast, watching it splash short of my target – this wasn’t going to be as easy as I had thought. Nevertheless, I blooped my popper back in towards me, focusing on keeping my rod low to keep the face of the lure in the water. Cast number two… three… four… five… SMASH! The rod bends over into a deep arc, the spool on the reel starts spinning, line running off at an unbelievable place - this is unreal!

This fish directed itself straight down and wasn’t going anywhere near our boat anytime quickly. So tough was this fish that I could only muster a few small pumps to try and turn its head my way. All I could think was “if this fish has this much pull, it must be huge!”. Pump and wind, pump and wind - a sliver of silver flashed beneath the boat and with a quick grab of the leader my first GT was on board. But it wasn’t the behemoth I had imagined, but a relatively small specimen – nevertheless, I was stoked to have ticked this epic species off my bucket list, and ready for a massage when I got back to the resort! How people tangle with the behemoth GTs in the likes of Oman, I don’t think I’ll ever know – hats off to them!

After a few quick photos, my new friend was sent splashing back to the reef to wreak havoc on another lucky angler one day. I wasn’t sure that I could handle another battle (and cursed myself again for skipping the gym!), but out came the popper rods again and off we went.

When I wasn’t on the water or in a restaurant, I spent most of my leftover time in the water. The island has a resident marine biologist and dive instructor, Cliona, who took me to explore one of the island’s surrounding reef systems. As with many Pacific islands, the underwater life was spectacular. The seclusion of these reefs in particular made them a uniquely untouched wonder, teeming with all manner of reef life. Whilst I opted for a tamer dive, there was plenty for the adrenalin seekers looking to swim with sharks and the like.

What impressed me the most about the island was how self-sustainable they were with regards to the meals on offer to guests. The island operates three restaurants, all of which utilise the produce grown on the island’s own farm.

On the days we fished, everything that was taken back to the island was prepared in one of these restaurants for the guests to share. Executive Chef Anthony Healy is a keen believer in the “farm to plate” model, or in our case, “ocean to plate”.  My favourite of the three on-site restaurants was “Walker d’Plank”, a unique establishment in that it has no menu. Instead, chef Caroline sits down with each table to discuss what they’d like for their meal, then, she whips up as many courses of delectable delights as you can handle – needless to say, I ate there at almost every chance I got! Caroline’s speciality is Asian-fusion style meals, a cuisine that lends itself beautifully to all the fresh fish we were bringing in. I ate a mixture of fresh Spanish mackerel sashimi, calamari and seared tuna steaks on a daily basis.

Kokomo is a well-equipped retreat for any fishos, regardless of whether they’re all about the fishing, or just want to spend the odd day on the water. The resort is second to none in terms of service and makes a great base for a huge range of activities on offer. They cater very well to family groups, with plenty of activities on offer for fishers and non-fishers alike. 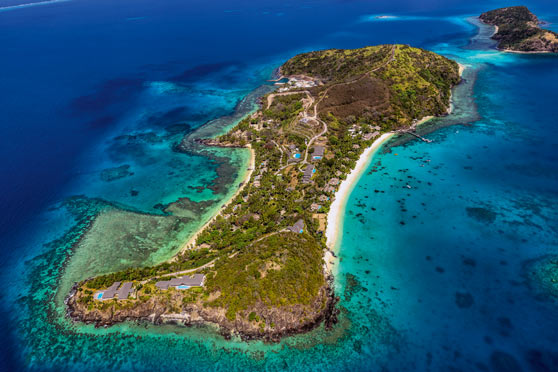