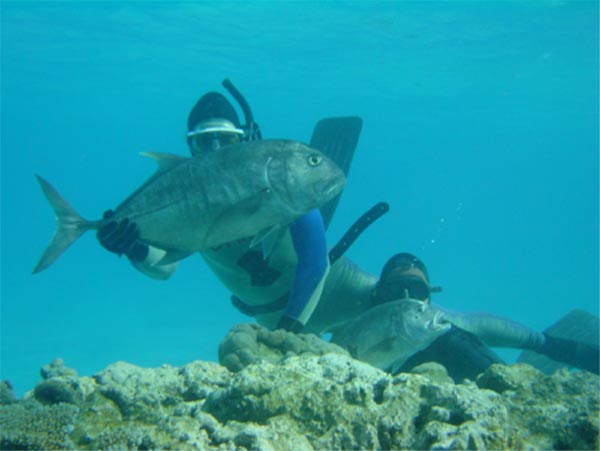 It happens every time I flop into the water: the bubbles clear and with them go the cares and concerns of life.

I am in clear, warm, Fijian waters on a guided spearfishing holiday with Wild Blue. The swells rise and surge onto the reef. There is a zone where I feel safe between the turbulent breakers and the drop-off to the deep. I am caught up in things that remain with me like photographs: a reef shark silhouetted beneath the breakers, the huge bulk of a manta ray. I slow my breathing to six breaths per minute. My heart slows down, too. I am ready to dive. As I slide down, a herd of grazing parrotfish move across the reef, hammering at the coral. There are unicorn fish and butterfly fish. The coral is mostly broken rubble. This is free diving.

A sea snake inspects me and I get a little scared. I load my spear gun.

Lance lowers a flasher to bring in the pelagic predators. I hang around hoping to poach any fish that come in. Nothing happens — and then everything happens.

A Spanish mackerel circles the flasher. I slide down and at 10 metres we drift along beside each other. Paul Marlin our Wild Blue guide has told me to swim hard at this species. It turns for one last look and I hit it in the lateral line. Its brief struggles bring the reef sharks in, the way tapping on a tin of pet food will produce the family pet. They circle as I secure the fish and reload the gun. Oh boy! It feels good to get that gun reloaded. This is blue water hunting.

Once the fish is secure the sharks seem to know it's all over and they go. All except one two-metre-long white-tipped reef shark. It hangs around behind me. I see it enter a gutter in the coral so I enter further up and swim towards it. We meet in the middle, it keeps coming, veers left, then keeps coming, finally breaking right and up and out of the gutter, completely ashamed of itself. My ego bursts out all over the place: I just played chicken with a shark and won. Video images of the whole thing replay in my head; this is just silly.

I see Paddy and Gary who are on their first trip to blue water. Paddy, a woman, is tougher and fitter than most guys I know. Gary, at 40-plus, is fitter than I ever was or will be. He proves it by swimming up to a turtle and catching it for a photo session. Turtles are not slow underwater! Paul is with Paddy and Gary, pointing out the fish.

I remember my first bluewater hunting trip with Wild Blue. Darren Shields spent hours with me setting up opportunities to shoot wahoo and dogtooth tuna, only to watch me miss or fail to shoot at all. It all paid off in the end, Darren.

I have been edging ever closer to where the waves are breaking. In the wash are pompano, blue-spot trevally and giant trevally. Paul has been showing us how it is done, by bringing them back to the boat. Swimming near the wash requires a little enthusiasm. Gary’s got enthusiasm. A big roller picks up his float and bungy line and drags it inshore. Just when the bungy is at full stretch another roller gently picks him up and gives him a whirlwind tour of all the must-see sharp bits of the reef. I guess that’s why Picasso bodysuits come with special glue.

A small parrotfish darts up to inspect me; on the way back it gets caught in the wash and is rolled over three times. I have never seen a fish get rolled before. It tries to merge in with its mates, but we all know which one it is.

A shark nonchalantly swims under the wash as if it is not even there.

I let the current take me through the reef passage. The coral is vitalised by the currents. Coral bombies rise up from the floor. I slide down. On the wall of the passage are gorgonians, soft corals and sea fans. A grey-black blotch slowly takes on the form of a grouper the size of a horse, and a Napoleon wrasse, huge but somehow delicate, edges away from me. Coral trout are schooling in the current. There are fish everywhere, too many to keep track of. I see squirrel fish, a lone trumpet fish, goatfish, butterfly fish and a lizardfish on the bottom.

The current carries me through to the protected side of the reef. The blue depths change to white sands in crystal-blue water. The coral is glorious. I see a brain coral decorated with multicoloured tubeworms, and plate coral a couple of metres wide. A school of small light-green damselfish dart into some yellow coral for protection as I pass. Hot water is pouring off the sun-baked reef, mixing with the cooler waters it gently pushes the light around. The noise of the breakers subsides. I feel relaxed and protected from the dangers of the outer reef.

A school of huge surgeonfish hang in the water. Two sharks silhouetted on the white sand watch my silhouette pass over them. They rise and join a third and rapidly head in a straight line towards the passage, one behind another. It means someone has shot a fish. Later on I find out that it was Lance. He was busy trying to secure his fish when 15 sharks turned up to help!

This trip I have been hunting with Lance. He is a legend, an Action Man look-alike, ex-body builder who has not gone to fat. He can do 40 metre dives. He is professional in his hunting; nearly all his shots are kill shots. He gets the big fish on this trip. Watching these guys I realise how limited my experience and ability is. It doesn’t matter — I am learning all the time. For years I dived on my own and all I learnt was bad habits. Now I feel safe and pick up techniques that extend my limits safely. I like the attitude of the club — there is no pressure to do stupid things, but if you want to extend yourself they will teach you to do it right.

Wild Blue has the gear you need to dive well. I have a 3mm Picasso body suit, Escapez fins, a rubber weight belt, a Rob Allen 140 double-rubber spear gun, a 55-foot bungy, and a Riffe float. This sort of gear makes all the difference in the water and it puts a smile on Paul's face to sell it to you.

Back at the boat we slop around while eating lunch. I can only eat a chocolate bar or sweets everything else turns to berley! The swell combined with the tide creates interesting conditions at the mouth of the passage. The suspected boatman eats heartily. He is either extremely competent or totally unaware. In case of the latter I have all my dive gear on before we attempt the passage. The others must think I am keen.

Back at the resort we sit on the porch and have a few beers. Everyone is dipping little bits of raw fish in Wasabi sauce and washing it down with Fiji Bitter. We argue about everything, but mostly on the ethics of spear fishing. The local village love us. They have been eating fish all week and have planned a big feast. They tell us to shoot anything. The bubble divers at the resort are not that keen on us shooting fish. We are all somewhere in the muddly middle. I have come specifically to hunt big pelagic fish, not reef fish. Some days in the water I line up a fish and don't pull the trigger.

Spear fishing is banned in some areas, possibly because of indiscriminate hunting. Some of the team are defensive about it and point to commercial and recreational fishing as being far worse. These arguments, right or wrong, don't inspire me. In my view, spearfishing opportunities will dwindle unless we earn the good will of the public. Nothing succeeds for long without public good will.

Paul tells me of a plan back in New Zealand to raise and release kingfish. I am rapt about this. Never mind that the first commercial fishing boat may get the lot. This release programme says that we are putting something back, and that we value our environment. It is a winner. We have something positive to say to the media. The more the better — animal rights groups and the like are effective in communicating their messages. They normally have a spokesperson with contacts in the media. They are ready with the type of background footage the media want. We need to get smart.

It’s now the end of the sixth and last day. I head towards the boat with a nice blue-spot trevally. I see a snapper on the floor of the passage (25 metres). After five days in the water it seems effortless to drop down, spear it and play it to the surface, but for me it is also a personal triumph.

My message about blue water hunting is this: DO IT! It's fantastic. Do it with a club, take it easy on the fish, and put something back.

To get on the next trip contact [email protected]