First glimpses of a recovering fishery?

It’s not too much of a stretch to describe Palliser Bay as the spiritual home of surfcasting in the lower North Island.

Situated on the Wairarapa south coast, an hour and a half’s drive from downtown Wellington, this magnificent bay has always had a productive fishery; rarely does a well-organised surfcaster leave without a fish or two in the catch bag.

Palliser Bay’s setting is what makes it such a spectacular place. It sits on the northern fringe of the Cook Strait’s many canyons, and the edges of the bay are anchored by ranges rising steeply from the Alpine Fault (the Rimutakas to the west and the Aorangi Range to the east). In between are many miles of fishable beach – rock fringed beaches on the edges of the bay and steep, clean, south-facing shingle beaches in the middle.

The range of species that moves through the bay throughout the seasons is wide, but overall the fishery is more typical of southern climes than northern ones, with red cod, blue moki and blue cod among the more common scaled species. But what is exciting at the moment is the increasing presence of New Zealand’s favourite fish, the snapper!

Going by the maxim ‘a smart fisherman is a successful fisherman’, this trend is of real interest to me. If a genuine re-emergence of snapper in Palliser Bay is occurring, it is a welcome development for surfcasters in the lower North Island. In a short period of time I’ve seen some big changes and can only hope they will be sustained and that even better snapper numbers will be seen in future. Right now snapper are visiting in numbers that mean surfcasters can fish the bay with a reasonable prospect of success, which is not something that could have been said ten years ago. Furthermore, with a smart approach you can experience the improvement for yourself.

Finally, I know snapper is delicious, but if you do experience success catching a snapper at Palliser Bay, consider releasing it. Tony released the fish caught on my recent trip, and watching it swim away vigorously had me hoping that others might do the same so the fishery can grow and thrive.

Palliser Bay – then and now

To understand why snapper have become more populous in Palliser Bay in recent years, it is helpful to take a brief look back to the past.

The emergence of surfcasting in the 1950s saw intrepid Wellingtonians exploring the Palliser Bay coastline and making some mind-blowing catches. Big snapper and hapuku were regularly caught from the steep beaches of the bay, with some even caught on cord hand lines! 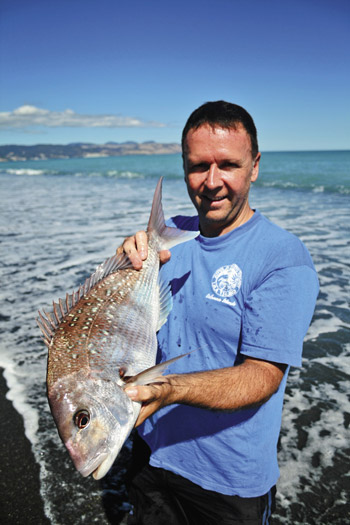 With a few years’ experience to draw on, these surfcasters identified a noticeable run of large spring snapper, with October usually being the best month. However, same as many parts of New Zealand, Palliser Bay’s snapper fishery suffered terribly at the hands of commercial operators from the 1970s onwards, and stocks went into a deep downward spiral. (For a comprehensive account of the decline in the snapper fishery, Sam Mossman’s book Snapper provides a brilliant record, drawing on stories from some of Wellington’s legendary snapper fishermen.)

In the years following the collapse, the bay retained a reputation for producing a few big snapper every year – the numbers had been reduced to a trickle, but what snapper did get caught tended to be big, over 5kg, with the odd ‘20-plus pounder’ appearing at times.

It was during this time that I arrived in Wellington, and it took more than 200 hours fishing around

Palliser before I extracted a snapper from its waters. True to form it was a fat fish – almost as deep as it was long – weighing over 7kg. In this post-collapse period few snapper seemed to get caught in the traditional spring months, with summer and autumn becoming the most likely seasons.

Over the last five years, more and more snapper have been caught in Palliser Bay, almost always in the summer and autumn months when the weather is more settled and the sea is at its warmest. In addition to the greater numbers of fish present, pan-sized fish have started appearing, sometimes as small as 1-1.5kg, something Wellington’s surfcasting pioneers very rarely experienced, even during the halcyon days.

On a fine, hot February Sunday, I decided to head for Palliser Bay with the express purpose of catching a snapper – not something I would have done five or ten years ago, but such has been the surge in snapper caught from the shore, I left home feeling I had an even chance.

Having picked up my mate Tony Stenhouse on the way through, he regaled me with the results of his last four surfcasting trips to Palliser Bay, which collectively had netted him five snapper between two and five kilos.

On arrival at the beach conditions were excellent: slightly murky water, light swell, and no wind. First casts went out and Tony had a solid bite almost immediately. Jokingly he called it for a snapper (it could have been anything), but his face tightened with concentration as I watched him. For a second time he called it for a snapper (this time without the grin and the laugh!), and, sure enough, a nice panny of 2 or 3kg slid up the beach. Surely it couldn’t be so easy?

Well, as it turned out that was the one and only snapper caught that day, but nevertheless Palliser Bay had surrendered another one to a surfcaster. 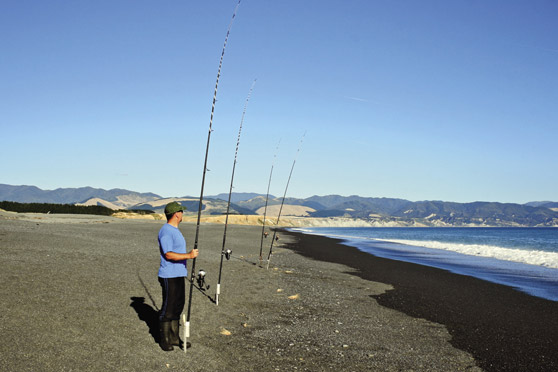 It’s hard to pin down what has caused this increase in snapper numbers, or even to know if we’re just in the middle of a blip in the fishery. Factors at play could include less commercial pressure, warmer water temperatures or an improvement in the quality of river discharges into the bay. Whatever the reason(s) though, I’m not complaining.

Knowing there is a legion of keen surfcasters in the lower North Island, I thought I would share some tricks and techniques that can optimise snapper success in Palliser Bay…

Fish during daylight. This may come as a surprise, but I’m not aware of any snapper caught at Palliser Bay under the cloak of darkness in recent years. They seem to be daytime feeders here. Anyway, keeping a bait on the bottom during the dark hours can be virtually impossible due to the hordes of red cod and spiny dogfish that move in close to the beach.

Fish the big south-facing beaches. The main producers of big fish can be found along 15 kilometres of clean, steeply-sloping, south-facing beaches stretching between Corner Creek in the west and Whangaimoana in the east, so there’s plenty of water to choose from.

Fish summer and autumn. Palliser Bay (and southern Wairarapa in general) experiences its most settled weather and warmest sea temperatures over these seasons – important considerations this far south. If snapper is your target, save your brownie points during winter and spring and hit the beach every good weekend you can from December to April. Another advantage of this time of year is that undesirable by-catch species are less prevalent, enabling baits to be kept on the bottom that bit longer for passing snapper.

Pick your conditions. The right conditions are even more important than the right season. I personally aim for swells of less than half a metre and reasonably clean water. However, the bay is rarely crystal-clear in close due to the type of sand and sediment on the bottom, so don’t be put off if it appears a little murky.

Use fresh bait. Although you will hear the odd story of someone catching a 20-pounder on freezer-burnt squid from the local garage, I strongly recommend using fresh bait. Successful types of bait in this location include paddle crab, crayfish, pilchard and trevally – but again I stress it must be fresh for Palliser snapper!

Use plenty of bait. Same as most species in Palliser Bay, the snapper tend to bite boldly and hook themselves if a breakout-type sinker is used. Even in excellent conditions the water in close tends to be a little murky, so the fish here hunt with their noses and bite hard. Two-hook ledger rigs and/or big baits keep a strong scent in the water and bring the snapper to your bait. Don’t worry too much about bait presentation or using small, subtle baits, because bigger seems to be better.

Spec up your tackle. The beaches here are steep, gravelly and unforgiving. A prolonged fight with a big snapper is hard on tackle – rigs and mainline can easily part through abrasion, especially on the ‘drop-off’. I recommend using a length of 18-27kg (40-60lb) leader and rigs constructed of 50-60lb mono