Dion James reflects on the freshwater season that’s been, before taking a look at what spring and summer might have in store for us…

It’s been an interesting winter around the Rotorua Lakes with a combination of good early season fishing, nothing much doing, and late-night flurries of intense fishing. This goes hand in hand with seriously sporadic weather movements, which dictate how the spawning runs go. Generally, the rule of thumb is that you need cold frosts and storms to get any major responses from spawning runs. The same was true this year, and unfortunately, we had lots of warmer than usual days, so being in the right place at the right time was paramount to success. Those that went out and put in the time, especially when catching a falling barometer, had very good results. Some anglers set up camp from morning until dark and then left early in the night with minimal results. However, a few experienced anglers that came in once others had left did exceptionally well.

The early 5am starts weren’t firing much this year either like they usually do. I found that around the first 10 minutes was good, which was probably thanks to the midnight to 5am no fishing rule that lets fish come in close to shore. After a quiet patch, the next best time is then around 7am when the change of light comes into effect. Pods of hungry rainbows chase smelt in the shallows at this time, and that may last anywhere from a few minutes to half an hour of topwater action. Stripping a Grey Ghost or similar smelt pattern triggers an aggressive response and generally a hook-up. It pays to have a separate rod rigged up for this as this bite time can be very brief. Watch the surface for any irregular water movements or swirls, quickfire a cast on or near the target and strip your line immediately in a rolly polly configuration. Strip, strip, and strike! Allow the fish to run and don’t put too much pressure on because they are fat healthy fish and move super-fast!

The best conditioned fish this year came from Lake Rotoiti, with quite a few tipping the double figure mark, and plenty caught in the 7-9lb bracket. Ruato Bay and Hinehopu end (at an area known as The Pipe) were the two main producers. The Transformer was slow and, even during the daytime, the usual spawning rainbows that generally create redds along that shoreline area and the old dump next door were missing in action for the best part of winter. However, they did return towards the end of the season and anglers who were fortunate enough to find them had action. 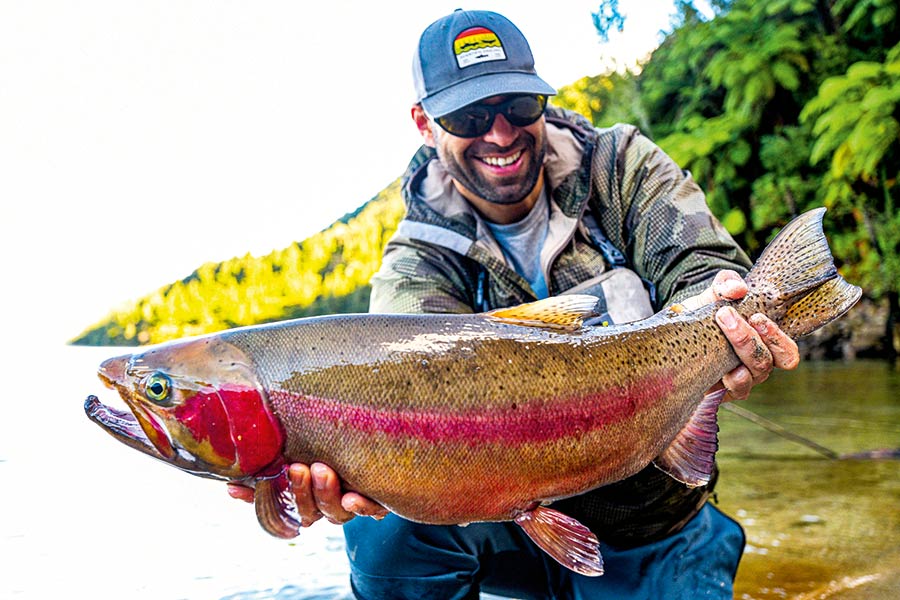 The writer with a classic Ruato bay rainbow jack taken on the change of light while stripping smelt imitations.

It was also the first time that new regulations allowed spin fishing to be open in what were once fly only areas, and there were a good number of angler’s utilising this option effectively. A wide range of spin gear was effective, including soft-baits. This provided a good option when there was a prominent onshore wind or when looking for distance.

The sight fishing fly tactics we used were similar to your standard river rig – simply a floating line with a small indicator and a globug or nymph of your choice. The key is being stealthy and patient. Put the fly in the right place and wait; sometimes they’ll nudge the fly, tail slap it or just ignore it, but eventually they’ll have a brain explosion and bite.

Okataina had very low water levels this year, which offered opportunities to access other areas. It fished superbly on a southerly wind, as that is the prominent onshore wind coming into the main beach. This drives the fish in close and from reports, there were twenty plus fish nights for those tough enough to stick it out in the teeth of a freezing southerly. The place fishes well in wet stormy conditions too, especially around the small self-formed creeks flowing off the main beach areas. The left of the nets near the jetty fished particularly well, and the rock point further around is another known spot that can produce fish all day.

Lake Rerewhakaaitu never really kicked off this year. I’ve had reports from disappointed anglers not touching a fish from the main spawning beaches around the DoC camp off Ashpit Road and the Domain back near the village. It did pay to have a boat to locate the fish, and the friends of mine that did this found superb action around the harder to access places.

Lake Rotoma was probably the pick of the lakes as far as consistent catch numbers were concerned. The main spawning beach area held consistently high numbers of fish, and though not big, they provided excellent sport.

Generally, the lakes mentioned above are typically winter fishing lakes and stop fishing well around August as fish head back into the lake to feed once spawning is done. That’s when I turn my attention to Lake Rotorua so I can target the spring smelting brown trout. These fish are usually around from September right through to summer. The Ohau Channel also reopens and will be probably the best place for the landbased anglers to fish.

The tactics don’t really change when targeting smelters around Lake Rotorua. If targeting the brown trout from shore, try walking around the stream mouths where smelt might congregate near shingle beaches. Use a 6wt rod and about 12ft of fluorocarbon tippet – I use Scientific Anglers sonar slow intermediate line and Absolute tippet as it’s got a fine diameter and is strong. I fish this with any of Pat Swift’s smelt patterns. Find your target and cast at an angle where your fly is going to be retrieved against the current and allow as much time as you can for it to sink. This way your fly swims better in a more natural motion with a moderate figure eight retrieve.

In the Ohau Channel, you’ll be wanting to get down deep. Heavy gauge gear will be what I recommend. An 8-weight rod with a Scientific Anglers Deepwater express line stripped off into the current from the weir will work well. Use nothing less than 12lb tippet and a big smelt fly in size 10 or bigger. You can also try the inlet in front of the weir with the same setup as when targeting those smelting browns mentioned above. Here, the current will work your fly for you. Try a paddle tail smelt – it’s perfect for this. Another option is to try the edges at night and cast very short (barely a rod length at times) as fish will sit hugging the banks waiting for easy food.

If there’s anything that lockdown taught us last time round, it’s that the fish get a break and time to pack on extra condition, so the prospects look very promising!