Being from Waihi Beach in the North Island, taking a free-diving trip to the bottom of the South Island in the middle of winter would be a shock to the system for me! The journey to Doubtful Sound (where Flightless awaited our arrival) consisted of thick, snow-capped mountains and sub-zero temperatures.

With five of us being freedivers, we were all shivering at the thought of that water and possibly questioning our sanity at that point. However, as soon as we boarded Flightless and set sail, the scenery was absolutely picturesque. A perk of the winter temperatures was the sheer, snowy mountains which shone against the clear sky and disappeared into the glassy-still water of the sounds. Incredible! Even though it was chilly, that backdrop was so worth it.

The main objective of this six day journey was free-diving and spearfishing however, we had a few keen fisherman who would be kept satisfied over the next week with not only fishing but kayaking, paddleboarding, exploring and of course a constant supply of fresh seafood (a perk of having five keen divers on board).

The unforgiving open coast resulted in a night’s stay in Doubtful Sound, having attempted to reach Dusky Sound during the first day. After a bumpy steam down the coast the following morning, Dusky welcomed us with calm waters and endless nooks and crannies to explore. Time to dive!

I was frothing to get down there and get my hands on some serious crayfish – there is nothing quite like grabbing a pair of solid horns and wrestling against the power of those incredible crustaceans! Having grabbed the biggest crays I have ever seen last year on the south coast, I was eager to try and match (if not beat) my efforts.

I had a full new kit of Beauchat spearfishing gear to put to the test on this trip, so I geared up eagerly, excited to try it out. The hardest and most numbing part was actually bringing yourself to undress and get into (and out of) your wetsuit. Thank goodness there was a spa pool on the top deck! it was a lifesaver, even if the five of us did have to squeeze into it in our wetsuits!

Anyway, as expected of Fiordland, it provided us with an array of seafood to collect as soon as we jumped in. And to my relief, my Beauchat gear kept me super warm and comfortable! Even though the fishing wasn’t super-flash throughout the trip, the diving made up for it all… We quickly discovered that the female crayfish were in berry (carrying eggs) which resulted in nests of impressive females standing in a protective stance. They will tuck their tail beneath them, which protects the mass amount of eggs that are attached to the underside of their tail.

Because of this stance, you can quite often tell if they are in berry without having to grab them or disturb them. These nesting females made for an incredible sight, with most nests having one impressive buck (male) crayfish standing guard. And some of these nests contained up to 50 or so individuals, with feelers everywhere you looked! Nonetheless, there were plenty of big bucks to be found and after all, our usual target are males, which ensures the female breeding stock is left alone.

We were diving in water anywhere from 3m to 15m deep and bringing up big, tasty crayfish from 2kg to 4kg. Both the crew and we divers were careful to regulate how much food we needed and after the day’s ‘quota’ was met, any other big bucks we got our hands on came out of their hole for a quick photo and were then released.

Crayfish is a favourite of mine, not only to eat, but to hunt. They are incredible creatures that are so complex and not a lot is actually known about them and their lifecycle. But my appreciation of these crustaceans can wait for another article! 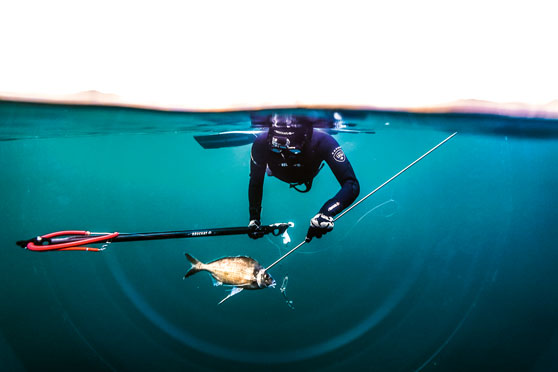 Fiordland is made even more extraordinary by its unique underwater dynamics. Deepwater emergence occurs throughout the area, which is basically the high rainfall flowing down through the forests, becoming stained by tannin, and creates a dirty surface layer on the water. This results in less light penetration which allows deepwater species (which have light sensitive eyes) to live comfortably closer to the surface. For free-divers and spear-fishers, to see a hapuka or even a tarakihi on one breath is an insane experience.

Not only are there deep water fishes to find, but I saw plenty of black coral, my first carpet shark and big crays just out in the open. There was also amazing fish life with schools of butterfly perch, telescope fish, blue moki, copper moki, the odd trumpeter and conger eels - many of which I have not seen before. Oh, and don’t forget all the big blue cod lurking around!

A highlight for me was the tarakihi. I was stoked to be able to observe and shoot my first tarakihi on my new Beauchat Marlin Carbone 1050 in only 5-10m of water! Another tick on the bucket list.

The hapuka are still a little elusive, but a couple of the boys found some at about 20m and they were buzzing! We also collected big paua, massive kina and huge mussels; everything is a little oversized in Fiordland! It is an understatement to say that we ate like kings. We feasted on our fresh catch every day, down to the very last scrap. I was in food heaven and I think that everyone else was too! And more!

Being aboard Flightless provided us with so much more than just diving and Pure Salt really can cater for anyone. A highlight of the trip for me was actually paddle boarding through the canals, in particular, Luncheon Cove. 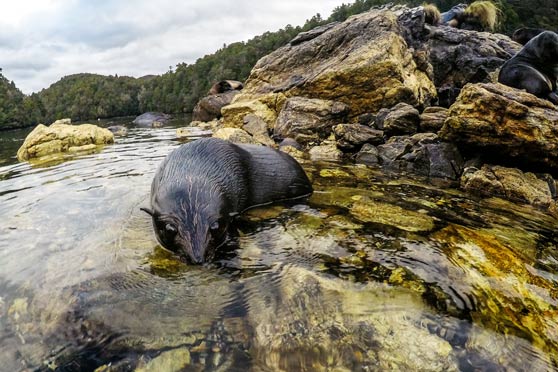 A seal colony lives here and there were dozens of seal pups just waiting for our attention.
Sitting on our paddle boards, the fuzzy and inquisitive pups happily interacted with us for over an hour. They really are just puppies, adorable with so much character!

So we all enjoyed some paddle-boarding and kayaking as well as a few historic walks and sightseeing. Unfortunately there were no deer to be seen, but at times venison is an easy target on the slips and beaches. And of course just relaxing on the boat, fishing, sitting in the spa or reading a book was always a nice alternative.

The ex-Navy vessel Flightless proved to be absolutely ideal for exploring the diversity of Fiordland. 26m of pure beauty, Flightless is super-comfortable and has everything you could ever want when living on a boat for a week or so. Even right in the middle of winter, we were always warm and relaxed. 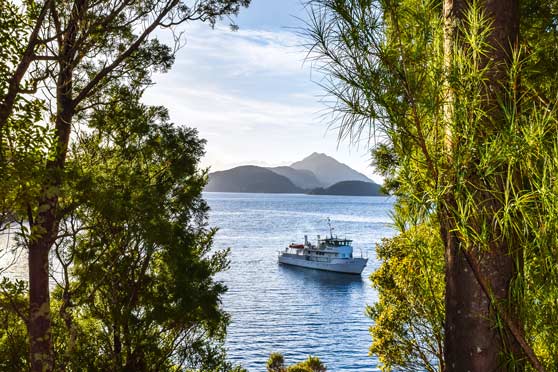 Although the vessel was amazing, it was the incredible crew that really made the trip so special. Owners and operators Maria and Sean really impressed me with their overall experience and local knowledge and having the amazing chef, Anna, who continuously fed us delicious creations was also a bonus! I already can’t wait to head back down there, especially on board Flightless.

There are very few places left in New Zealand, if not the world, which are as untouched and bountiful as Fiordland in terms of underwater life, kaimoana and even hunting. So if you are considering Fiordland, make it happen because it really is worth every cent. And with the Pure Salt crew, they make the journey that much more special!