Guide to fishing the Mackenzie Canals Let’s get one thing straight. This is not mud fishing. For a start, there is no mud, it's rocks. And secondly, these canal fish don’t taste like mud. They taste like the best trout you have ever eaten, or they taste like salmon, which probably means they are salmon – sometimes it is hard to tell them apart by looking.

The McKenzie canal system in the central South Island was built in the 1970s and 1980s for the sole purpose of providing the perfect environment to grow colossal trout and salmon. While that statement may not be entirely accurate, it is a by-product of the hydro-electricity generation system.

Lakes Tekapo, Ohau, Pukaki and Ruataniwha are all connected by 58km of canals - the Tekapo, Ohau, and Pukaki. The main purpose of the canals is to provide a regulated flow of water to the turbines in the hydro power stations. When water in the canals is flowing, the fish are active.

The canals are owned by power companies Genesis and Meridian, who lease out parts of the waterways to four salmon farms. The oxygen-rich alpine waters flow through these farms providing an excellent environment to grow salmon quickly and safely.

Because these canals are controlled by seven different dams, they never flood, never dry up, and always have some flow to keep the water oxygenated and nutrient rich.

These environmental conditions are also perfect for the fish outside the farm cages. All the rivers and streams in New Zealand are affected by flooding and droughts, which greatly affect the distribution of fish and fish food. The canals are so well protected from the natural elements, all aquatic life – especially small bullies and snails – thrive, providing a massive food source to the wild fish.

The secondary food source is, of course, the stray food pellets the captive salmon fail to eat.

These conditions combine to help brown and rainbow trout grow to world-record proportions. These fish are not just big, but they taste spectacular, with most of the trout tasting like salmon!

The key requirements include no swimming, boating or entering the canals. There is no touching or interfering with the salmon farms or power generating equipment, and stay out of the way of people and machinery on official business.

All roads are private, so sticking to the specified speed limit is a must, and no littering! There is strictly no staying overnight in tents, vehicles or campers.

We have access to a world class fishery, so we must respect the landowners’ rules. 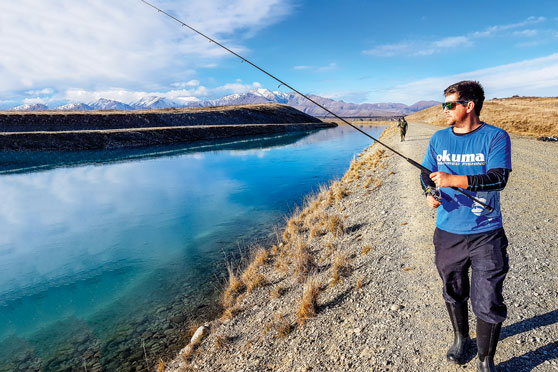 How to get there

One thing that makes the canals so special is their isolation. Most of us need to travel significant distances to reach Twizel. It is a 3.5-hour drive from Christchurch Airport, and 2.5 hours from Queenstown airport.

For us in the North Island, we already have a mission getting to one of these airports, before hiring a vehicle (remember snow is a factor in winter) and praying that the mountain roads are open. A 4WD is advisable, and extra room for chilly bins and fishing rods is a real bonus.

You could always do a road trip, a 1250km journey from Auckland, plus a ferry ride. And that’s one way! But it’s a cool drive through some of the world’s most beautiful landscapes and there is the opportunity to fit in some hunting and fishing on the way down! Take the kids – have a holiday!

If you decide to fly, choose your flights carefully, because the baggage allowances are crucial. One airline has multiple bags for the total weight that you purchase, with a $25 per item for oversized (longer than one metre)rod tubes. The other airline you pay per bag, but can have 23kg per bag. The important thing is to book an extra bag if you intend to fly home a poly bin full of tasty fish. Some of salmon farms sell bins for around $10.

Prices start from around $40 for a campervan park or dormitory bed, up to $350 for something luxurious. Just remember that there are no overnight stays allowed on the canal roads. Not for motor homes, tents or sleeping in your car. Back to the camping ground you go!

Fresh salmon and eggs for breakfast is a must, but first you must catch your salmon! Twizel has a nice Four Square supermarket and many cafes and restaurants. The problem is you should be fishing at dawn and dusk, or even all night.

I recommend stocking up on plenty of food at your accommodation and to keep it in your car. If fishing is great you will not want to drive back into town for a sandwich. The gas station opens at 6am – first in, first served for the pies!

Taking a cooker to heat up the billy or fry up some sausages is a great option.

You could be fishing 20 minutes from the nearest shops and don't be surprised if you leave your accommodation at 6.00am and get back at midnight - you are probably going to get addicted.

If you are heading down in the winter, it's cold – like proper cold! My old mate Bryce Helms has fished one day in minus 21-degrees Celsius. Be prepared for snow, and hope it never comes.

Winter temperatures can and will be below freezing. It's all part of the fun though. The good thing about winter fishing is that the canals are more likely to be flowing well, as more power is generated for heating and lighting the houses of those unlucky fishos still at home in front of the heater.

Take the best thermals, fleece and waterproof overgarments you can find, along with insulated gummies or neoprene waders. Beanies, balaclavas and gloves are a must – and that’s before you get out of the car. Then pack some shorts for when the sun comes out and it turns into a cracker of a day. You must be prepared for any weather.

A good head lamp and sun glasses and a backpack to hold your tackle and a drink are important, because you could end up walking miles from your vehicle. That is normally when you hook a beauty and need a landing net. Not a trout net, a big snapper net! Make sure you take it with you when wandering off along the canal.

A light snapper soft bait set would be okay to use, but if you are serious, a dedicated canal rod is what you need. An 8ft (2.44m) 1-3kg carbon rod with a 2500-sized spin reel, spooled with 6-10lb braid is what you want

I've been lucky to tag along with Bryce Helms, who is a well-known authority on the canal fishery. Bryce has designed several rods for soft-baiting and egg rolling, and I got to fish with some nice prototype rods before they hit the New Zealand market.

Chasing chinook salmon is generally done close to the farms the fish probably escaped from. Salmon farms have been in the canals since the 1990s and are getting bigger all the time. A formerly captive salmon will have the tell-tale munted tail from being harassed by his mates and rubbing on the rope cages.

Spinners and soft-baits seem to be the most productive method to score yourself some tasty escapees.

The salmon are used to fighting for their food, so will instinctively snap at a passing lure without a second thought. Then the fun begins! Keeping your braid intact by avoiding the underwater cables is a challenge you must think about that before you hook the fish.

Dawn and dusk are great times to fish, but salmon can be caught at all hours of the day and the winter months seem to produce more fish.

While some salmon escape the farms, some are released into the canals from the hatchery with the help of our Fish & Game license money; others breed naturally in the canals.

A wild salmon will look different to a once-captive fish, with a beautiful forked tail, and a longer, more slender body due to being able to swim more than 20 metres in a straight line. Uncaged salmon will only grow to about 15-20lb (3-4 years old) and die after they have spawned.

You will see plenty of manky spent salmon trying their best to die peacefully in certain parts of the canals in winter. Don't eat them. Both browns and rainbows roam the canals and grow to epic proportions. In fact, a world record brown was caught in Ohau C in 2013, weighing 19.1kg(42.1lb).

Bryce Helms caught one a few years later that tipped the scales at 19.05kg (42lb) but it was weighed two days after it was caught. No doubt more records will fall in the future.

A few rainbows have been caught around 18kg (40lb), but the world record is 21.7kg (48lb) from Saskatchewan, Canada. Many expert anglers believe that there could be 50lb (22.3kg) trout in these canals.

Water quality and an exceptional food supply is what make these fish get big, but luck, skill and time is what it will take to land one.

A few summers back an 8km section of the Tekapo canal had to be drained and there was a gigantic relocation of the fish. Observers noted that there were more than 350 trout per kilometre of canal, and 30% of those were 8-14lb in weight. This was over 15km from the nearest salmon farm! Remember, there are 58km of canals, so your chances of landing a nice fish are pretty good!

For those who are buying a freshwater license for the first time, you must know the rules. Here are a few of the rules that apply to the McKenzie country canal system:

For a full set of regulations, visit