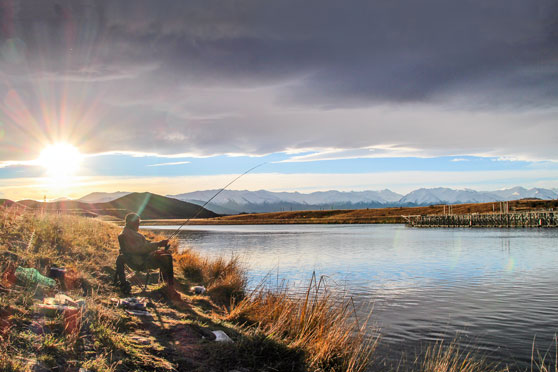 All techniques work in the right situation, but it depends on what fish you are targeting, the time of day, and what part of the canal system you are fishing. Being versatile is the key, so gear up with different tackle options when you go fishing. If it’s blowing a gale and snowing, maybe parking up with a shrimp bait may be the best option – or else the pub! Egg rolling is a term used for drifting a trout egg imitation. It is a popular technique in the winter months when the fish are spawning and eggs drift naturally down the canal, but it works year around.

The trick is to make your egg imitation look like the real thing. Having plenty of flow in the canal is a must for your egg fly to look inviting, and use the minimal amount of weight possible. A common rig would be attaching your braid mainline to a tiny three-way swivel, then tying a metre of fluorocarbon from one branch to your egg and the tiniest of sinkers to the other branch.

You want your egg close to the bottom of the canal, drifting at the same speed as the water is flowing. You then walk downstream at the same pace, keeping in contact with the bait and waiting for a bite.

This is where the quality of your rod comes into it.  The trout will suck in the egg and spit it out again if it doesn't feel natural, so you have only an instant to set the hook.

You will need to change your sinker as the flow rates change – you will learn how much weight to use by watching others.

To roll your egg, simply cast upstream on a 45-degree angle, let your egg sink and then walk downstream, flicking your sinker out of the rocks when it gets held up and waiting for a touch of a fish.

In certain parts of the canals you will get a large contingent of fishos rolling eggs along a stretch of water, all walking together at the same speed. This is not where you cast your prawn...

Over the summer months, soft-baits are deadly on salmon and trout, but they can also work in winter when flow rates are suitable.

Small bullies are abundant in the canals, making up a massive chunk of the trout’s protein-rich diet. Imitating a small two to three-inch fish with an ultra-light jighead is a deadly combo.

The take on a small 1/16-ounce jighead can be just a soft mouthing, so thin hooks are needed for easier hook-sets. As with egg rolling, this is where the quality of your rod comes in: you need to be able to cast a small jighead across the canal and also feel a fish’s soft touch.

Set your rig up much as you would for snapper soft-baiting, with around 1.5m of fluorocarbon leader, as light as you are comfortable with.

The technique used is slightly different to snapper soft baiting, as you want to use whatever drift there is in the canal. Try keeping your bait just off the bottom, giving it small twitches, and making a very slow retrieve while walking downstream with the current. You are mimicking a bully, not a mackerel.

As with saltwater soft-baiting, use the lightest jighead you can – the canal is only 6-13 metres deep, remember. Jighead weights from 1/16 to 1/6 of an ounce are perfect – and pack and plenty of them.

The thought of using a shrimp for bait and putting a bell on the end of your rod might send shivers up a purist’s back, but bait fishing can be very effective.

Using something resembling a smaller surfcasting rig (sometimes on a surfcasting rod) and anchoring a shrimp mid-canal can be your best choice in the middle of the day when it’s time to park up for lunch and have a well-earned beverage. It is also a good option when there is very little water flow.

As you can only fish with one rod each, but are allowed to be up to 15 metres away from it, it’s a good chance to get the kids involved. Soaking shrimps is hugely popular over summer with first-timers to the canals, as there is very little skill in hooking the fish, but plenty needed in landing them.

Adding a small float to help your shrimp sit just above the weed is a good idea.

The best place to cast your shrimp is away from anyone else along the canal. If you cast your shrimp (or huhu grub, if you can find one) in the middle of a group of anglers who are rolling eggs, it would be thought rather inconsiderate – and they will tell you so, politely of course!

Traditional spinning and fly fishing still work well in the right conditions, but are less popular due to the success of egg rolling and soft-baiting.

A weighted nymph and Glo-bug combo like you would use on the Tongariro River can work well, but these fish don’t often feed on insects, so a dry fly is less productive.

Spinners work well at the bottom of the Tekapo Canal, at a spot known as the fish bowl, as it is much deeper than the rest of the canals. The bowl has steeper sides and a heavy spinner that sinks, retrieved a lot quicker than a soft bait, works well. It's a good idea to have a few spinners in your tackle box even if you are not intending to fish that way, as a fall-back option.

The canals are 58km long, so there’s plenty of room for everyone! The atmosphere among the fishermen in my experience has been awesome: anglers net each other’s fish, share nets, take photos of each other, and offer advice on tackle when asked.

Some good old common sense must be adhered to along the canals, like don’t cast a bait out while you are among a group of fishos rolling eggs, and don’t roll and egg in amongst a group of bait fishermen!

A few other angling expectations are:

If you love fishing, fishing the canals needs to be on your bucket list. Throw the kids in the car and head off on a road trip, or grab some mates and have a hard-core fishing holiday.

Enjoy snow-capped mountains, pristine, unpolluted water, brisk temperatures and catch a fish of a life time – the list goes on! It’s why the McKenzie Country canals are rapidly becoming one of my favourite parts of the country. Make it happen, people – you will love it! For those who are buying a freshwater licence for the first time, you must know the rules. Here are a few of the rules that apply to the McKenzie country canal system: