Greg Morton had heard rumours about the small, colourful Teviot River trout, but had never targeted them himself until recently. With a favourable forecast, he ventured to Central Otago’s wild backcountry to see if the stories were true…

Central Otago’s Teviot River is a remote, high country waterway. It exits Lake Onslow, which is located at the northwest end of the Lammerlaw Range, and flows down through a rocky gorge to the Clutha River near the Central Otago town of Roxburgh. A notable fact is that gold was discovered in the Teviot River in 1862.

Information about fishing on the Teviot River is limited, but some anglers had noted that the fish are all brown trout, plentiful, small and very colourful. My interest was piqued, so it was time to experience this river for myself. 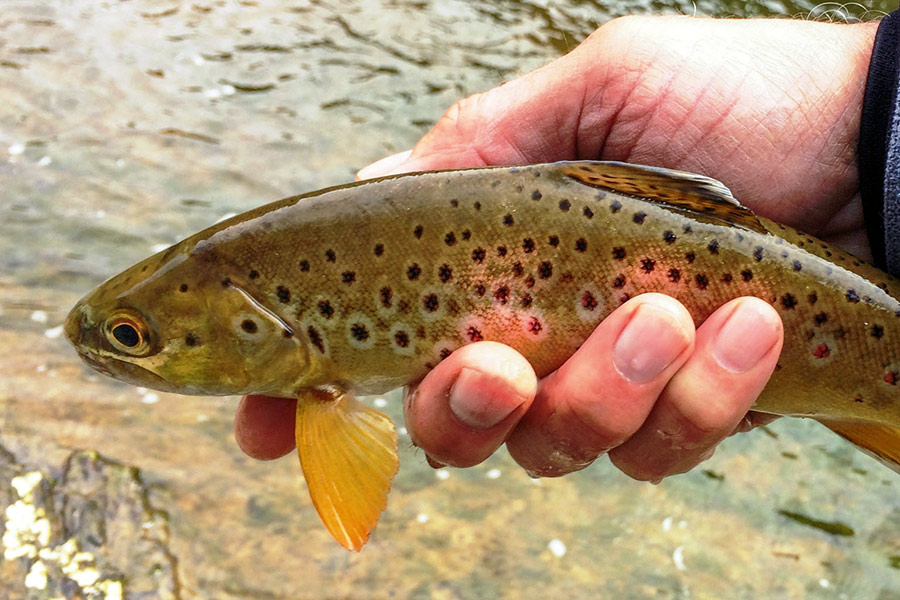 The average size of the trout is small in the Teviot, but their colours are amazing.

When I left Alexandra, the weather promised a good day, but two hours later as I drove up into the back country above the Teviot Valley, conditions were not so flash. A southerly wind had sprung up, the sun had gone behind the clouds and the day was looking gloomy. Access to the Teviot River is limited. The only entry points are at the top and bottom, and as I didn’t know where exactly to access the bottom section, I headed for Lake Onslow where I could access the upper river below the dam.

Two road options link with Lake Onslow Road. They are winding, dusty and corrugated but it got worse for me at the top where the dry weather track begins. I entered real 4WD country down towards the lake. This road was seriously rough, and was very rutted and gouged out as a result of the earlier rain. By the time I reached my parking spot, I felt I had already had an adventure just getting there.

The wind and cold conditions had ruined the fly fishing opportunities so I selected a spinning rod and some small Mepps lures as my weapons of choice. Hopping the fence, I found the river quite wide but shallow. You tend to fish water on the Teviot rather than trying to spot fish because of the peat stained water. What you discover is fast rapids, frothy dark water and short, swift tail-water glides. The stream bottom is boulder and weed-covered, while massive rocks constrict the river in many places. Following the river downstream is fraught with difficulty, as steep bluffs force you to boulder hop, scramble under fallen rocks, squelch through swamps or skirt the edges of rapids. 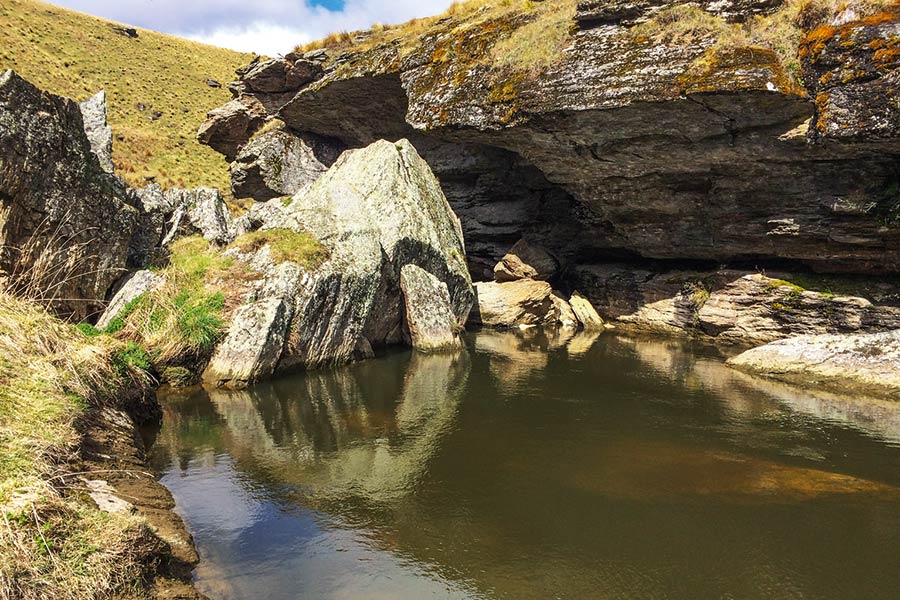 The Teviot River and its surrounds is serious gorge country.

I learnt pretty fast to climb up and around bluffs rather than struggle under them. Some of the bluffs dropped eighty metres or more straight into the river.

It really is goat country in the upper reaches, though sidling along fifty metres above the river was easier as it consisted of rolling, tussock covered hills. Once a long stretch of promising water is spotted from above, it’s time to drop down and fish it before by-passing the next set of bluffs by gaining height again.

I landed two fish on my first two casts in the first pool; they were small and very colourful browns so the facts I had read about the Teviot were correct. I felt I was going to have a great fishing day but sadly the rest of my time was mostly spent climbing and descending the banks. I ended up landing seven trout over about five hours, with some good water providing nothing. I lost another three and had quite a few strikes and nudges. The best fish was about half a kilo, so none were kept for the pot.

Nearly all the trout landed or lost were hooked soon after the lure splashed down. Turn the handle and fish on.

These trout were opportunistic predators waiting for food from above or food washed past them. They liked hanging out in caves and in front or behind sunken boulders. Twice lures that bounced off the cave wall were whacked before the retrieve even started. I used two colours and sizes over the day: a size two white Mepps Thunder Bug when the water was deeper and for most shallower water, a size one gold Mepps Thunder Bug. Both colours caught fish. The trout in the Teviot are extremely colourful. This brown was caught on a Mepps spinner.

The gorge itself is authentic Central Otago wilderness: brown in colour, arid and barren. The river is full of colossal rock slabs tilted against each other and smaller boulders scattered along the valley floor. The river in places has to blow itself through rock dams then erupt like a sluice gun through the holes created. I can only imagine what this river must look like in full flood. Black-backed seagulls nested on rocks in the bluffs and a bush falcon skimmed past on the hunt.

My least favoured plant that is prolific here is the giant spear-grass, also called the Wild or Spiny Spaniard. They grow in clusters so in trying to avoid one, you bump or put your hand on another. Their spines don’t bend so contact is like a mini spear thrust, and often the tip breaks off.

My best ally against the Spaniard as I progressed down the gorge was the wild pig. They had dug up a lot of the plants and devoured the roots, leaving big holes in the soil. A lot of the sign I was seeing was fresh so it was no surprise when rounding a corner that I spotted a big, spotted sow staring at me. It lifted its tail to indicate unease, and just after I took a photo, it ‘woofed’ and took off with a couple of mates. Central Otago wild pigs usually have a bit of Tamworth in their genetics so are often reddish, tan, or spotted in colour, which makes great camouflage. 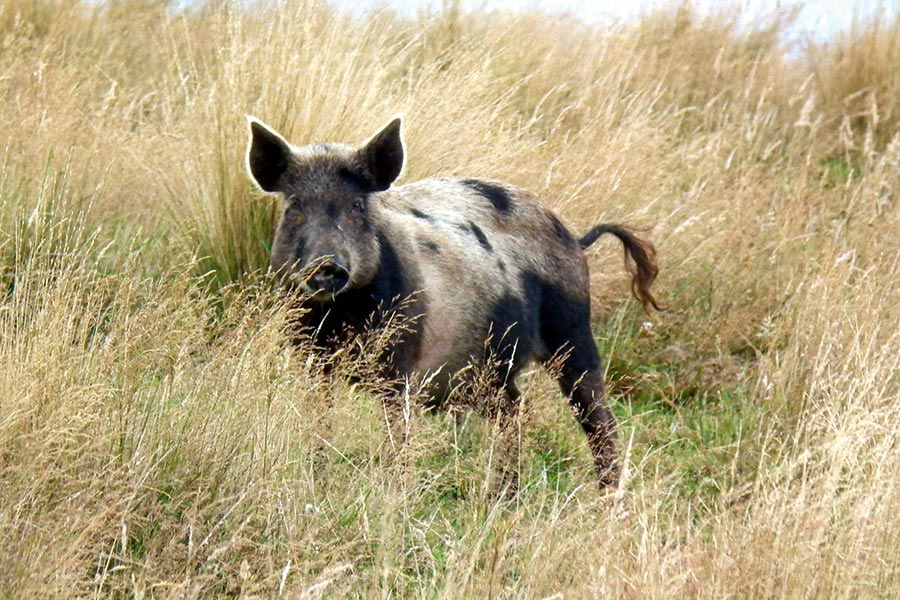 A wild pig sow the writer stumbled into while walking between fishing spots.

I finally ran out of puff climbing around bluffs so headed back to the truck. It had been an adventurous experience in real wild country. The Teviot River fishing itch had been well and truly scratched.