Greg Morton took a trip to Tuapeka West to fish a new section of the Clutha River and was not disappointed. He shares the story of the weekend.

State Highway 8 is the main Central Otago highway that follows the path of the Clutha River from Cromwell to Beaumont. At Beaumont, the Clutha turns right and snakes its way down to Balclutha and out to the sea, while SH8 goes left down to Milton. A large chunk of mainly farmland sits between the departing south Clutha River and the departing east SH8. This area is named Tuapeka West and the nearest service town is Lawrence on SH8.

I had never visited Tuapeka West and my interest was raised when I saw a farmstay advertisement for the region that mentioned trout fishing. Soon after, I got in touch with Pam and Graham Hunter, and booked in for three nights in their private cabin. The beef and sheep farm is 860 acres in size and borders the Clutha River for 100 acres of that.

Snow melt in the Clutha River saw my trip postponed twice but as soon as the Clutha cleared I was on my way down SH8 to Tuapeka West. The area where the farm buildings are located is called Kononi. Paying guests can wander where they please, but have to remember it is a working farm and be flexible when planning activities.

After catching up with my hosts and gleaning fishing advice, putting gear in the cabin and poring over a provided map, I headed down the hill towards the Clutha. I am familiar with the Clutha River in the section between Alexandra and Wanaka but had never fished in this lower section. It is a big river so I was looking for quieter water, backwaters, beaches and shallow ripples. The deep swirly holes are harder to access because of willows, though the larger fish and perch often live there.

The Hunter clan love their trees so native and exotic tree stands were prolific, as well as larger native bush blocks. The bellbird and tui populations were strong and birdsong filled the air. Two wood pigeons also flew past as I assembled my fishing gear down on the Clutha shoreline. This part of the Clutha is isolated because the nearest road is on the other side of the river and only a boat could get to where I was. This is one of the plus sides of a farm-stay. While visiting the location, you are granted access rights to amazing private spots. 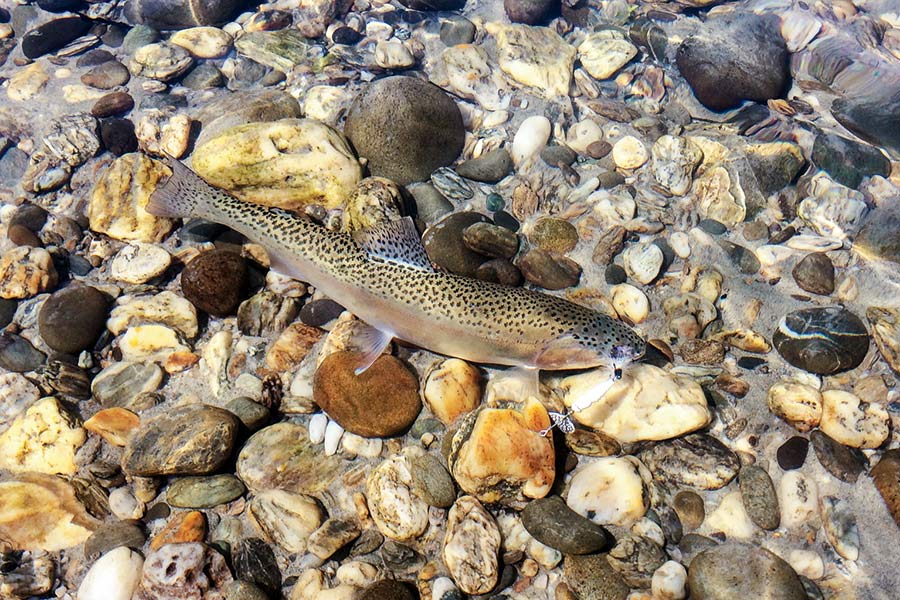 While visiting the farm stay, you have access rights to amazing private spots.

Along the shoreline is occasional gravel beach and it was on one of these that I began fishing. The first thing I noticed was that the river bottom was much different to the river bottom upstream at Alexandra. It was a stone/gravel bottom rather than a silt bottom and very clear and fishy looking. I started with a green spinner and ‘whack’ – it was nailed first cast. A short fight saw a fat 0.5kg brown come to the net to be released. The next cast got exactly the same treatment from a fish that looked exactly the same so it too was released. I missed out on the hat trick before later catching fish three and four down the other end of the beach. All were the same size.

The day was well advanced so I stopped at this point and headed back up the hill to my base. Taking a breather at one point I looked across the river at timber logging operations going on in the Blue Mountains. This range of hills is famous for its quality black fallow deer herd which over the decades has produced some of New Zealand’s largest free-range fallow trophies.

The next day I headed further downstream targeting beaches, gaps in the willows and accessible deep holes. I landed six for the adventure with a bit more diversity in the bag. Two were rainbows, three were browns and one was a large perch. The perch was just where you would expect an ambush predator to be hanging out. He lived in a deep, dark hole under the willows and nailed a green curly tail soft-bait I dropped to the bottom and popped up and down a few times. He engulfed it and for his greediness became tea for the night. I was surprised he had no mates as when you get one, more usually follow. The other fish were all about the same 0.5kg size and were released. It was becoming clear that this size was the area average though I saw one bigger fish hanging out in an inaccessible spot. 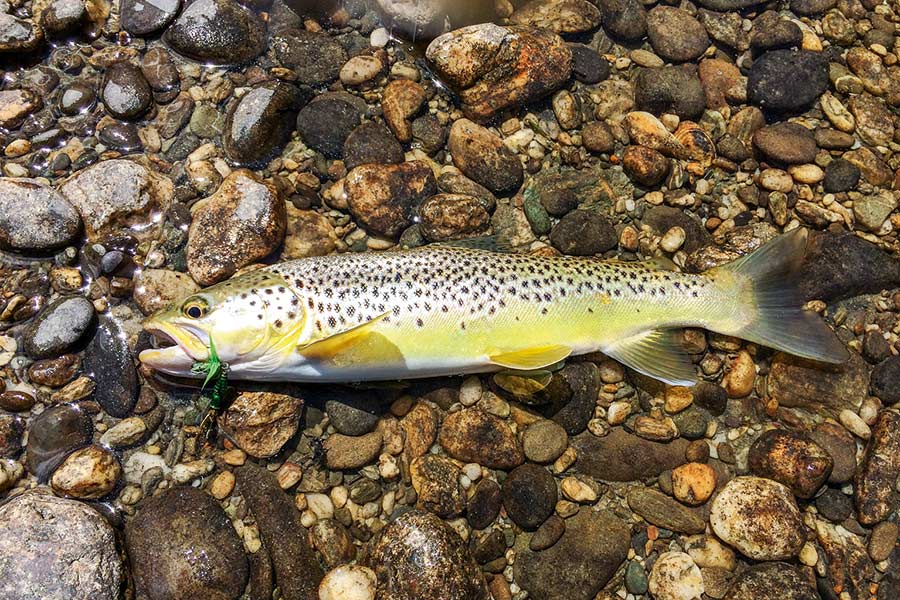 On day three I travelled a bit further in the truck as the Tuapeka River and Waitahuna River are nearby and both tributaries flow into the Clutha. The Tuapeka River is historically famous as Gabriel Reid discovered gold near the river in 1861. His find sparked the country’s first major gold rush, and for his efforts the Otago Provincial Government paid him a finder’s fee of 1,000 pounds, equal to $110,000 in today’s currency. A Tuapeka Mouth ferry still exists and takes vehicles and people across the Clutha each day between 10am and 2pm. It is free as the ferry is treated as being equivalent to a public bridge. 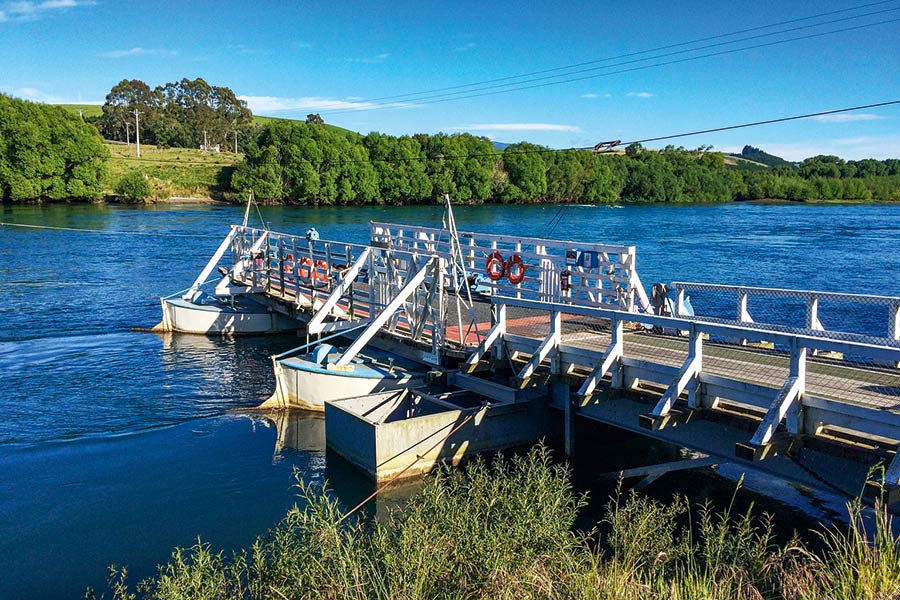 Both the tributary rivers were low so I fished the Clutha again in the section of water below the Clutha River Bridge near Clydevale. It was a great stretch of water being one long continuous ripple for five hundred metres. Another five mixed brown and rainbow juveniles were landed and released while the fish of the trip, a 1.3kg rainbow, was kept and left with the Hunter family. 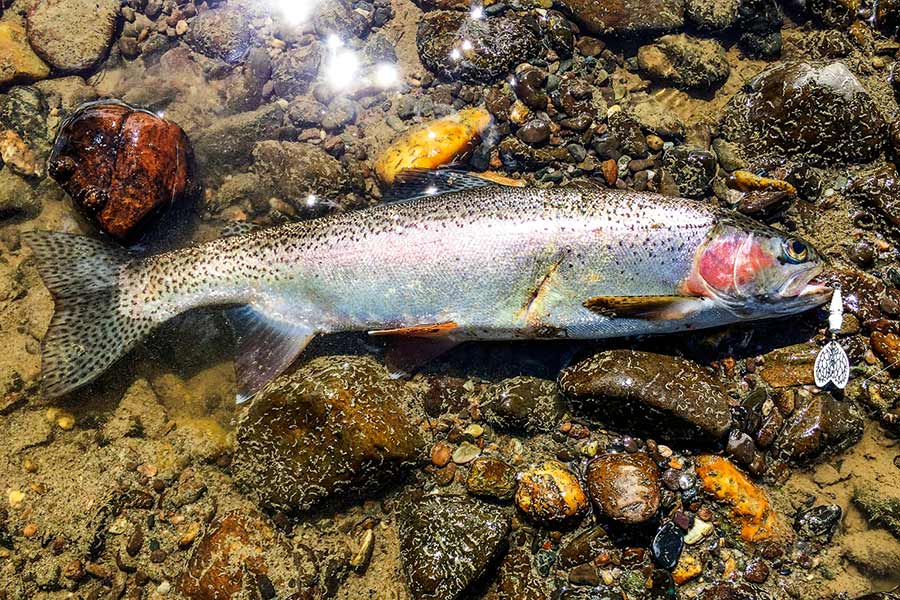 The writer's fish of the trip, a nice rainbow.

The next day I headed home. It had been a great trip and I really enjoyed seeing a new piece of fishing country.